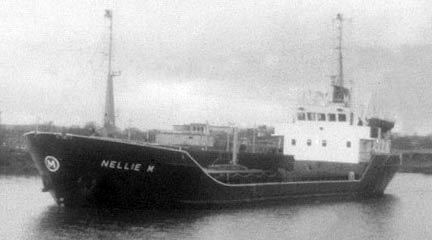 caption= The coaster "Nellie M" in 1974
location=, off Derry
target=2 cargo ships
2,000 BRT
date=,
,
time=
timezone=
weapons=2 s
4 explosive charges
fatalities=none
injuries=none
perps=
motive=To hinder British shipping around DerryThe IRA carried out two bomb attacks against British ships in February 1981 and March 1982 at , a large inlet between and , in the . Both vessels were sunk, but their crews reached the coastline safely in lifeboats.

The declared IRA's aim was to disrupt the maritime traffic out and from the , on the east bank of the Lough. They also intended to force British and Irish authorities to deploy security guards on board the merchant ships [ [http://tiocfaidharlaa.blogspot.com/2005_02_01_archive.html#prof "Random Ramblings from a Republican"] ]

On the British side, the "Bird" class patrol boats HMS "Cygnet" and HMS "Kingfisher" were already assigned by the to protect the waterways of the province. Their mission was to prevent the smuggling of weapons from the Republic.

These warships were often shot at by the IRA, especially at . [Ripley and Chappel, page 30] The "Cygnet" was near-missed by two rounds fired from the "South Armagh sniper". [Harnden, page 400]

inking of the "Nellie M"

The "Nellie M" was a coaster ship of 782 BRT, launched in 1972 at . She was owned by S. William Coe & Co. Ltd. of at the time of the attack, which took place on 6 February 1981. The vessel was at anchor barely convert|300|yd from the Republic’s shore, awaiting for proceeding up the river. The coal ship had departed from Liverpool with a cargo valued at £ 1 million. [ [http://www.rhiw.com/y_mor/nellie_m/nellie_m.htm#prof "Nellie M" history and profile] ]

A team of 12 IRA volunteers, meanwhile, had hijacked a at a pier on , on the northwest bank of the inlet. Five of the group remained watching on shore, while another seven members of the ASU, carrying two high explosive charges, forced the skipper to take them to the British coal ship. Once on board, the cell informed her captain about their intentions and ordered him to gather the crew and to get his men into the lifeboat. Four volunteers supervised the evacuation. At the same time, three other volunteers planted the charges in the engine room. The hijacked motor launch then took in tow the lifeboat, leaving her adrift close to the eastern shore, and headed back for Moville. As the lifeboat reached the beach, the first explosion shook the "Nellie M". Huge flames, visible from several miles away, engulfed her bridge. A second blast, some hours later, blew up the bulkheads and the ship began to sink. The morning after, her stern was submerged. The hull was raised in 1982. [ [http://saoirse32.blogsome.com/2006/02/06/the-sinking-of-the-nellie-m/ From "Saiorse 32", 06/02/2006] ]

inking of the "St. Bedan"

The next year, the IRA was able to repeat the same operation against another British coal ship, the "St. Bedan", bound from to Derry. The 1,250 BRT "Bedan", built in Clyde and also launched in 1972, was owned by J & A Gardner & Co. Ltd. of Glasgow. [ [http://www.clydesite.co.uk/clydebuilt/viewship.asp?id=9209#prof "St. Bedan" history and profile] ] On February 23 1982, the ship was at anchor off Derry, awaiting the tide to proceed upstream.

This time the IRA boarding party was composed of 12 members. The attack was again launched from the pilot boat based at Moville, and after the explosions, the cargo vessel sank on her starboard side in some 15 meters of water. She was raised and scrapped by November 1982.The lifeboat with the crewmembers was towed in the same way that in the case of "Nellie M".

One of the unexpected consequences triggered by the bombings was the debate in the
about the dispute with the on the legal over the waterways in Northern Ireland. [ [http://historical-debates.oireachtas.ie/D/0328/D.0328.198103310030.html#prof "Oireachtas" debate, March 31 1981] ] [ [http://historical-debates.oireachtas.ie/D/0337/D.0337.198206300009.html3#prof "Oireachtas" debate, June 30 1982] ] Indeed, the salvage of the "Nellie M" was conducted by an Irish company, and her wreckage was sold to an Irish ship owner, who refurbished the ship under the name of "Ellie". The coal ship was subsequently bought by several companies. She was lengthened by seven meters and renamed "Trimix" . Since 2000 she is managed by a Columbian company after being rechristened "Dove".The "St. Bedan" was instead declared a constructive loss and scrapped at Liverpool.The IRA discontinued these attacks; this fact strongly suggests that the authorities redoubled their vigilance on the Irish side of the Lough, from where the seaborne assaults were launched. These measures apparently prevented further activity. A bigger naval target was hit by the IRA several years later (1990), when a number of volunteers managed to board the at anchor near , shortly after her launching. They planted two large bombs in her engine room. One of the devices exploded, damaging her considerably; the second one was successfully defused.