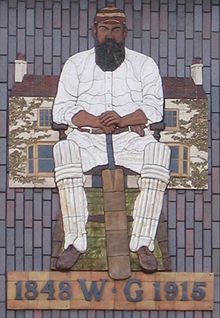 A mural of W. G. Grace in Downend

Downend is a suburb of Bristol in South Gloucestershire, England. It is located to the North East of Bristol and bordered by the Bristol City suburb of Fishponds to its south west and the South Gloucestershire suburbs of Staple Hill to the south, Frenchay to the west and Mangotsfield to the East. You can find the town on Google Earth with the coordinates N 51 29 16 W 2 30 15.

The outward expansion of Downend dating from the 1980s has been contained by the presence of the M4 motorway which swings around the northern side of Bristol. Downend has little industry within its boundaries, consisting mainly of domestic housing and local shopping facilities. A welcome development since 2003 is the opening of several premises as independently owned restaurants, allowing residents to eat out locally and a designer clothes store. Downend has its fair share of parks including The King George V Playing Fields, and there is also a local cricket club located in the centre of Downend. Secondary and primary schools based in Downend include Downend School,Stanbridge Primary School, Bromley Heath Junior and Infant schools and Christ Church Primary and Junior schools. There are a few local churches although the closest are Downend Baptist Church on Salisbury Road and the Christ Church on Downend Road. Badminton Road Methodist Church, between Downend and the Avon Ring Road, serves the newer housing alongside Badminton Road and in the Bromley Heath area.

Downend's greatest claim to fame is that the cricketer W. G. Grace was born in the village, and played cricket as a boy for the nearby West Gloucestershire Cricket Club, which had been founded by his father, the Downend GP. Sarah Dallin and Keren Woodward, members of the band Bananarama, also grew up in Downend (but attended Mangotsfield School). The rock band New Rhodes also lived in Downend for a short time.

The woods near Downend were the site of an air crash on 6 November 1957, when a prototype Bristol Britannia aircraft crashed killing the 15 man crew. The prototype aircraft crashed into nearby Britannia Woods, Downend after sweeping across the expanse of 1950s Downend.

Downend has a wide range of local parks and open spaces, most notably King George's Field in memorial to King George V, the playing fields are used for Football in the Winter and Cricket in the summer months.

Downend school features the majority of the area's sports facilities, on the school's site there is a Sports Centre, Sports Hall, Changing + shower areas and a Gymnasium. The school has an all-weather football pitch which is hired out regularly for football training by local teams, Netball, Basketball and Nine Tennis Courts , Cricket nets and long jump pits. However there are no rugby pitches because the council decide what sporting facilities it chooses, even though there are three football pitches and the all-weather pitch.

Nearby Stanbridge Primary School offers a range of dance and keep fit classes for the local community outside school hours.

Downend is close to the Avon Ring Road Cycle Path and the Bristol & Bath Railway Path, which link up with the Avon Cycleway and the National Cycle Network.

The annual Guy Fawkes Night fireworks display is organised by the Great Western Round Table.[1][2] The 40th anniversary show in 2011 was provided for the first time by Skyburst Illuminations of Bedminster, Bristol.[3]