Mosfellsbær
The title of this article contains the character æ. Where it is unavailable or not desired, the name may be represented as Mosfellsbaer.

The town of Mosfellsbær is only a 15-minute drive from midtown Reykjavík. The district includes the Leiruvogur cove, which forms part of Kollafjörður fjord. Three rivers empty into the cove: Leirvogsá, Kaldakvísl and Varmá.

Mosfellsbær provides numerous opportunities for outdoor and leisure activities, close to untouched nature There has been a systematic development of outdoor recreational areas for residents, their guests and tourists.

Often called "the green town", this town enjoys thermal activity and quite a few greenhouses have been built here. Since 1933 it has supplied the capital area with natural hot water for house heating, swimming pools etc. The mountainous area around the town is ideal for walks and hikes, skiing and fishing for trout and char in the small lakes.The Nobel Prize laureate for literature in 1955, Halldór Laxness (1902–1998), was an honorary citizen of the town. He lived there all his life and based some of his novels on his experiences and impressions of his surroundings.

The natural landscape of Mosfellsbær is rugged, and 80% of the district lies more than 100 metres above sea level. Hills such as Mosfell, Grímannsfell, Helgafell and Úlfarsfell, all 200–300 metres high, dominate the landscape; their slopes are grassy with screes. Two valleys lie between the hills: Mosfellsdalur and Reykjadalur. Most of the district's population live in the latter valley. In 1900, the population of the Mosfellsbær district (then Mosfellssveit) was a mere 400, but has grown rapidly, especially in the latter half of the 20th century, led by the utilisation of geothermal resources and development of a woolens industry. The population was 5849 on 1. December 1999.

The area around the Athletic Centre at Varmá is one of the country's best recreational areas. Emphasis is focused on catering to a variety of sports for children as well as adults.

The residential area extends from Leiruvogur into the nearby valleys, and curves around the mountains. It is close to beautiful nature, with an attractive and diverse community and cultural life, and offers numerous outdoor activities and a family-friendly environment.

Travelers who head out of Reykjavík towards the west and north of Iceland will pass through Mosfellsbær on route 1, while the road to the Þingvellir National Park, route 36, branches off in Mosfellsbær up the Mosfellsdalur valley.

Walking, for health and recreation, is possible in locations throughout Mosfellsbær. The town has a number of footpaths, as well as designated “information paths”, where signs provide diverse information about the surroundings.

An enjoyable walking/cycling path runs from the Reykjavík-Mosfellsbær border, along the coastline, to the sports complex at Varmá. There is also a beautiful walking path along the information path that runs from Álafosskvos to Reykir.

The top of Lágafellsklif provides an excellent view over the surrounding area. In good weather it’s possible to view the capital, Mt. Esja, Snæfellsjökul glacier and beyond. Landmarks and place names are marked on the viewing diagram. There is an information sign with the history of the church at the cemetery at Lágafell.

The sculpture, “Hús skáldsins - hús tímans” by Magnús Tómasson, stands at Stekkjarflöt at Álafosskvos. It is based on the town’s symbol and has references to the works of Halldór Laxness, Iceland’s Nobel Prize winner for literature in 1955. A large-scale wool industry built up around Álafoss waterfalls on the Varmá river between 1919 and 1955, and workers lived in the neighbourhood. Today, the old factory buildings have a new role: artists have turned them into workshops and galleries. The Álafoss factory outlet has objects from the old factories as well as photographs from that time, showing a fragment of the history of wool production in Mosfellsbær.

Nobel Prize winner Halldór Laxness lived in the Mosfellsdalur valley. The farm on which he was raised now is the site of the historical Mosfellskirkja church. On the valley’s south side is a cluster of friendly greenhouses. Laxness built a house for himself and his family at Köldukvísl, and named it Gljúfrasteinn. That house has now been turned into a museum. In his later years, the author wrote the book Í túninu heima (Home in the Hayfield), in which he described his childhood experiences at his home in the Mosfellsdalur valley. . 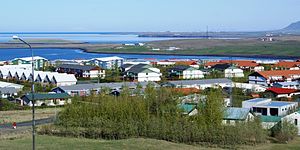 Mosfellsbær is home to Sigur Rós's music studio Sundlaugin, which prior to their arrival was an abandoned building including a swimming pool (sundlaugin means "the swimming pool"). The acoustics created by the building having a swimming pool center bottom was one of the reasons that they decided on investing in the property for future use. [4] Sundlaugin has been used for recording and mastering by many Icelandic musicians and others, including Amiina (which often tours with Sigur Rós) and Jimmy Lavelle from The Album Leaf.

Added interest in all types of sports and outdoor activities has been met with the systematic development of the outdoor recreation areas, for the benefit of town residents, visitors and tourists. The area next to the sports complex at Varmá has one of the best outdoor playing fields in Iceland, as well as a swimming pool, providing diverse possibilities for sporting activities, for both adults and children.

The local sports club Afturelding was founded in 1909. Today the club has about 3800 members. About 1200 people train and compete on behalf of the club in 11 divisions. There are only two employees working in the main management but over 40 trainers and other employees work inside the division. Over 100 volunteers work for Afturelding in leadership and divisions. The club has a lawful domicile in Mosfellsbær and is its residence in Varmá. The Kjölur golf course is located outside the town in the Hlíðar neighborhood just by the ocean. The Kjalarnesþing Lions Club started meeting here in 1965, changing its name in 1989 to the Mosfellsbær Lions Club.