"Think Different" is an advertising slogan created for Apple Computer in 1997 by the Los Angeles office of advertising agency TBWA\Chiat\Day[1]. It was used in a television commercial, several print advertisements and a number of TV promos for Apple products. Apple's use of the slogan was discontinued with the start of the Apple Switch ad campaign in 2002. The slogan appeared to have been a play on the venerable IBM "Think" motto coined by Thomas J. Watson, with IBM having been a direct competitor of Apple in the PC market. More explicitly, the Apple slogan served to challenge consumers who were wanting to buy IBM-derived Windows-based PCs to consider Apple as a smart alternative.

Significantly shortened versions of the text were used in two television commercials, known as "Crazy Ones", directed by Chiat/Day's Jennifer Golub who also shared the art director credit with Jessica Schulman and Yvonne Smith. The voiceover was by Richard Dreyfuss. An unaired version featured the voice of Steve Jobs.[2]

The words "think different" were created by Chiat/Day art director Craig Tanimoto. The text of the various versions of this commercial was written by Rob Siltanen and Ken Segall.

The thirty-second commercial was a shorter version of the previous one, using 11 of the 17 personalities, but closed with Jerry Seinfeld, instead of the young girl. In order of appearance: Albert Einstein, Bob Dylan, Martin Luther King, Jr., John Lennon, Martha Graham, Muhammad Ali, Alfred Hitchcock, Mahatma Gandhi, Jim Henson, Maria Callas, Pablo Picasso, followed by Jerry Seinfeld. This version aired only once, during the series finale of Seinfeld.

Another early example of the "Think Different" ads was on February 4, 1998, months before taking the colors out of the logo, where a commercial aired with a snail carrying an Intel Pentium II chip on its back moving slowly, as the Power Macintosh G3 claims that it is twice as fast as Intel's Pentium II Processor[4][5].

Print advertisements from the campaign were published in many mainstream magazines such as Newsweek and Time. Their style was predominantly traditional, prominently featuring the company's computers or consumer electronics along with the slogan.

There was also another series of print ads which were more focused on brand image than specific products. Those featured a portrait of one historic figure, with a small Apple logo and the words "Think Different" in one corner, with no reference to the company's products. The familiar faces on display included Jim Henson, Richard Feynman, Maria Callas, Miles Davis, Martha Graham, Ansel Adams, Cesar Chavez, Joan Baez, and others.[6]

Promotional Posters from the campaign were produced in small numbers in 24 x 36 inch sizes. They featured the portrait of one historic figure, with a small Apple logo and the words "Think Different" in one corner. The posters were produced between 1997 and 1998.

There were at least 29 different Think Different posters created. The sets were as follows:

The familiar faces on display also included Buzz Aldrin, Rosa Parks, Flik the Ant and others.[6]

In addition, around the year 2000, Apple produced the ten, 11x17 poster set often referred to as "The Educators Set", which was distributed through their Education Channels. Apple sent out boxes(the cover of which is a copy of the 'Crazy Ones' original TD poster) that each contained 3 packs(sealed in plastic) of 10 small/miniature Think Different posters.

Original Version: The original "Long version" appeared on posters made by Apple.

Upon release, the "Think Different" Campaign proved to be an enormous success for Apple and TBWA\Chiat\Day. Critically acclaimed, the spot would garner numerous awards and accolades, including the 1998 Emmy Award for Best Commercial and the 2000 Grand Effie Award for most effective campaign in America.

In many ways, the new ad campaign would mark the beginning of Apple's re-emergence as technical giant. In the years leading up to the ad, Apple had seen many of even its most staunch supporters switch over to other competitors in the market offering more sophisticated and better equipped processors. Even worse, the company had lost hundreds of millions of dollars due to the failure of Apple Newton, a billion-dollar project that proved to be critically, and commercially, unsuccessful. Appealing to the "counter-culture" image Apple had gained in its earlier years, the "Think Different" campaign, along with the return of Steve Jobs, put a bright spotlight on the company and consequently on many of the new products that were being announced, chief among them the immensely successful iMac personal computer and later the Mac OS X operating system.

Since late 2009, the box packaging specification sheet for iMac computers has included the following footnote:

One possible explanation for this inconspicuous usage is to maintain Apple's trademarks on both terms – a company must show continued use of a trademark on its products in order to keep it, but neither trademark is widely used in the company's current marketing (with regards to "Macintosh", Apple's computers are now usually marketed as simply "Mac"). 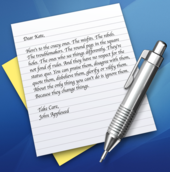 The TextEdit application icon from Mac OS X Leopard, which displays a portion of the Think Different text

Truncated versions of the "Crazy Ones" text have been reused in Mac OS X on the high-resolution icon for TextEdit introduced in Leopard, and on the "All My Files" Finder icon introduced in Lion.

On at least five separate occasions, the Apple homepage featured images of notable figures not originally part of the campaign alongside the "Think Different" slogan:

Apple's latest iPhone, the iPhone 4S; features built-in voice recognition software called "Siri". Built into Siri is a series of easter eggs, one of them include the question "What do you think about ...?", to which Siri replies: "I think differently."

"Think Different" has been criticized as a slogan for being grammatically incorrect. "Think" is a verb and should take the adverb, "differently", not the adjective, "different". On the other hand, in certain colloquial expressions such as "think big", this rule can be violated for effect. Furthermore, the Merriam-Webster Online dictionary cites use of "different" as an adverb dating back to 1744[7]. Also, with "different" as a noun, the phrase "Think Different" refers to what to think as opposed to how to think. This is similar to the difference between "Do Good" and "Do Well," where "Do Good" refers to performing good deeds such as being kind to others, and "Do Well" means to perform an action successfully, such as earning a high score on an exam.

The "Think Different" campaign was the subject of numerous satirical advertisements by culture jammer Ron English, in which the familiar phrase and logo were represented accompanied by pictures of Charles Manson, Adolf Hitler, and Bill Gates.

In December 2000, Apple's legal department sent a cease and desist letter to the Church of Satan over a parody they created using the image of Anton LaVey. Peter H. Gilmore, the webmaster and administrator of the organization, eventually took the parody down, but put up a page disputing the claim.

ICAT Bangalore issues its students a pamphlet which has the tag-line "think different" with the second "e" flipped.

The episode "Mypods and Boomsticks" of The Simpsons pokes fun at the slogan, writing it "Think Differently", because the slogan itself is not entirely grammatically correct.

For Steam's release on Mac OS X, Valve has released a Left 4 Dead–themed advertisement featuring Francis, whose in-game spoken lines involve him hating various things. The given slogan is "I hate different."[8] Subsequently, for Team Fortress 2's release on Mac, a trailer was released which concludes with "Think bullets".[9]

The 60-sec. version of the television ad

The 30-sec. version of the television ad

One-person versions of the television ad

Other advertisements with the "Think Different" slogan