The Gordon Highlanders was a British Army infantry regiment from 1794 until 1994. The regiment took its name from the Clan Gordon and recruited principally from Aberdeen and the North-East of Scotland. 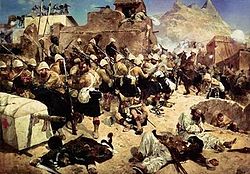 The regiment was formed on 1 July 1794 by the amalgamation of the 75th Stirlingshire Regiment - which became the 1st battalion of the new regiment - and the 92nd Gordon Highlanders, which became the 2nd. The 75th Highlanders were raised in 1787 by Colonel Robert Abercromby of Tullibody for service in India, where they saw a great deal of action. They went on to serve in South Africa, the Indian Mutiny, Egypt and on the North-West Frontier.

The 92nd were raised as the 100th Highlanders by the Duke of Gordon in 1794 being renumbered 92nd in 1798. Their early service included the Low Countries and Egypt, followed by Corunna, the Peninsula, Waterloo, Afghanistan and South Africa.

British troops, believed to be the 4th Battalion, Gordon Highlanders (20th Brigade, British 7th Division) crossing no man's land near Mametz on 1 July 1916, the first day of the Battle of the Somme.

The Gordons raised 21 battalions in the First World War, serving on the Western Front and in Italy and winning 65 battle honours. The regiment lost 1,000 officers and 28,000 men during the war. The legendary folk singer and Scottish Traveller Jimmy MacBeath served with the regiment during this era.

A further 27 honours were added in World War II when the regiment served in France in 1940, in Malaya, North Africa, Sicily, Italy and north-west Europe.

The 2nd Battalion was based in Malaya as part of the Singapore garrison and fought in the battle for Singapore in February 1942, surrendering along with 130,000 other British Commonwealth soldiers on 15 February. The men of this battalion suffered more casualties as Prisoners of War in Japanese captivity than they did during the fighting on Singapore Island and mainland Malaysia. The 2nd Battalion was reformed in May 1942 from personnel of the 11th Battalion and fought with the 15th (Scottish) Infantry Division.

The 4th (City of Aberdeen) Battalion was converted to an artillery regiment on 1 November 1941, becoming the 92nd Anti-Tank Regiment, Royal Artillery, as part of the 9th Armoured Division, but saw no active service during the war.

The 6th (Banffshire) Battalion was transferred from the 51st Highland Division before it surrendered in 1940 and joined the 2nd Infantry Brigade of the 1st Infantry Division. The 6th Battalion fought through the North African and Italian Campaigns before ending the war on garrison duty in Palestine.

The 7th (Mar and Mearns) Battalion served with the second formation of the 51st Highland Division throughout the war.

The 8th (City of Aberdeen) Battalion was also converted to artillery, becoming the 100th Anti-Tank Regiment, Royal Artillery. This battalion served with the 2nd Infantry Division in the Burma Campaign.

The 9th (Donside) Battalion (originally part of the 9th (Highland) Infantry Division along with the 11th Battalion) were initially posted to the Shetland islands. Later they were amalgamated with the 5th Battalion and sent to India for training. Converted to an armoured regiment, as the 116th Regiment Royal Armoured Corps (Gordons) they were sent to Burma. As part of 255th Indian Tank Brigade, they were involved in the dash for Rangoon and were heavily involved in the battle of Meiktila, signalling the end of Japanese hopes in Burma.

The London Scottish battalions were part of the Gordon Highlanders although they were a London recruited regiment.

After the war the Gordons saw active service in the Malayan Emergency and Northern Ireland.

James Kennaway based the script for the movie Tunes of Glory on his experiences in the Highlanders.

The novelist George MacDonald Fraser was posted as a lieutenant to the 2nd Battalion in the immediate post-war period, and wrote three volumes of short stories (the "McAuslan" books), which were lightly fictionalised recollections of his time with the regiment.

The original tartan of the 75th is not certain but it may have been akin to what is now known as Campbell of Breadalbane. The 92nd has always worn the Government sett with a yellow stripe, which is worn as a clan tartan by those of the name Gordon.

The regimental marches were Cock o' the North, St Andrew's Cross and The Garb of Old Gaul. HRH The Prince of Wales was Colonel in Chief.