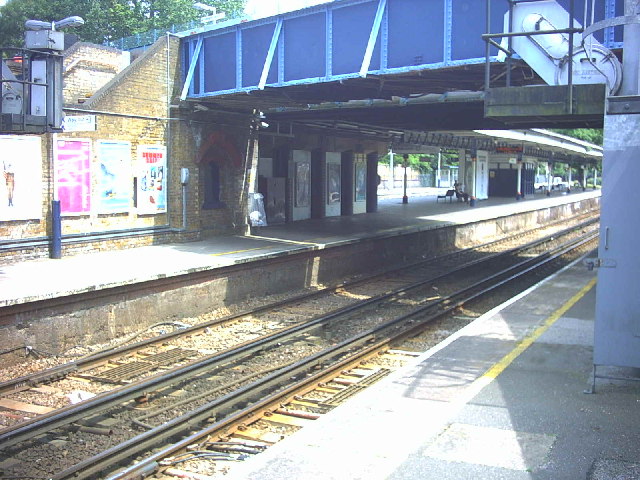 Barnes railway station is in the , in south , and is in . The station and all trains serving it are operated by .

The station, seven miles from Waterloo, was opened on 27 July 1846, when the line to Richmond was built. When the first section of the was opened on 22 August 1849, Barnes became a junction station. On the London side of the station there are four tracks; one pair turns off along the Loop Line here.

There are four platform faces: the general service pattern sees fast trains pass through on the South Outer platform (platform 4) and the north face of the central island (platform 2), while stopping trains for both Richmond and the Loop Line use the remaining platforms. (On Sundays all trains stop on the island platforms.) Station buildings are on the central island, which is accessed by a separate footbridge alongside Rocks Lane.

The Grade II listed ticket office is adjacent to Platform 1. It was built by in 1846 and is the only survivor of a series of brick-built Tudor-style stations on the Richmond branch. It is now privately owned.

*8 tph (trains per hour) to London Waterloo
*2 tph to Weybridge
*2 tph via Richmond, Kingston and Wimbledon
*4 tph via the Hounslow loop (2tph in each direction)

The Richmond and Hounslow services continue to London Waterloo.

The , in which 13 people were killed and 41 injured, occurred near this station on 2nd December 1955.