Dumka
This article is about the municipality in India. For its namesake district, see Dumka district. For the Slavic musical form, see Dumka (musical form).

Dumka, headquarters of Dumka district, is a city and municipality in the state of Jharkhand, India. It was made the headquarters of the Santhal Pargana region which was carved out of Bhagalpur and Suri districts after The Great Santal Hul 1855. Presently, it is the commissionary headquarter of Santal Pargana division which has 6 districts. It was bestowed the status of sub-capital of Jharkhand state.

There are two theories as to how Dumka got its present name. The first one being that Dumka got its name from the santali word Dumk which mean "shunted" or "small". Back during the British Raj it was a small town compared to suri and bhagalpur and hencce the name.

The other theory is that Dumka derives its name from a Persian word damin-i-koh, which means 'skirts (an edge, border or extreme part) of the hills'. The Mughals assigned this name to this and nearby areas on account of presence of hillocks and undulating terrain.

www.newhumanwelfare.org, A very fast growing NGO works to make the district developed and for the welfare of Poor peoples.

www.tapasthali.in,An NGO working in various fields including Education and Sanitation.

Ananda Marga is a religious Sociey founded by P.R Sharkar in 1955 at Jamalpur and ashram in Dumka. For more details, kindly follow : http://www.anandamarga.org

website of esaf, Evangelical Social Action Forum (ESAF) a Kerala based NGO working among the poor and undeveloped people of Jharkhand especially among children in Dumka.

The Dumka district has an area of 3716.02 km2 and consists of only one sub division namely Dumka. Under the Dumka sub division, there are 10 blocks namely Dumka, Gopikander, Jama, Jarmundi, Kathikund, Maslia, Ramgarh, Raneshwar, Shikaripara and Saraiyahat.

Dumka District have many popular temples like Basukinath, Sirshanath, Maluti Mandir, Shiv Pahar, Dharamsthana. A lots of crowd visit these place during the month of Sawan. Babadham is also the most popular temple but it is situated in Deoghar District near the Dumka District.

Dumka has predominantly undulating terrain with hard rocks in the underground. The entire district has a topography with high ridges and valleys bounded by mountains and rivers. The fertility of soil is poor due to extensive erosion, acidic character and low retaining capacity.

Dumka has a warm-temperate climate, with warm, humid summers and mild, damp winters.

Dumka is a small town,It is connected with road to the neighboring city.However in july 2011 Dumka is connected with newly built Jasidih - Dumka railway line.Since than city has seen a goring number of three Wheeler on road. Although there is an ongoing work on new railway line,which is connect Dumka to Bhagalpur (Bihar) and Rampurhat (west Bangal) in coming years.

Basukinath is located in Dumka District of Jharkhand. It lies on the Deoghar – Dumka state highway and is around 25 km northwest of Dumka. It is a place of pilgrimage for Hindus. Basukinath Temple is the main attraction here.It is situated on Jasidih Dumka New Railway line and Basukinath Railway Station is the nearest railheads. Ranchi Airport is the nearest airport. It is situated at Jarmundi Block on Dumka Deoghar State Highway at a distance of 24 km from the Distrcit Headquarters Dumka. In a year lacs and lacs people from different parts of country come here to worship Lord Shiva. In the month of Shravan people of several country also come here to worship Lord Shiva. For more details, kindly follow : http://www.bababasukinath.in

Mallooti is a historical and religious place which is situated in Shikaripara Block on Dumka Rampurhat interstate highway at a distance of 55 km from Dumka District Headquarters. In 1860 Mallooti was made taxfree capital by the then King Basant Rai alias Basant. This Mallooti is associated with the archaeological and religious importal place for natural beauty. 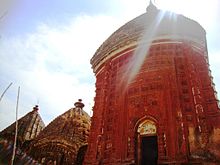 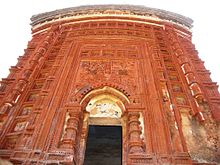 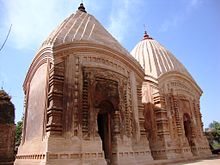 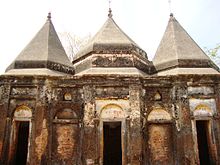 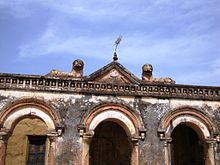 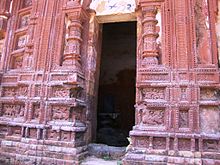 It is a religious place which is situated in Saraiyahat Block at the distance of 60 km from district headquarters Dumka. There is a big temple of the Lord Shiva. On the eve of Mahashivaratri the people of different parts of the district come here to worship Lord Shiva in addition to daily worshiping.

Masanjore is a famous picnic spot situated in Dumka District of Jharkhand. This small village is about 31 km south of Dumka. The picturesque Masanjore dam on the Mayurakshi River is a major draw. From the counterpart rupee fund created through supplies of wheat and other materials from Canada for use in India, Canada Govt. devoted those funds to further development of the Mayurakshi project And Masanjore dam was commissioned in 1955. That's why the Dam still mentioned as Canada Dam. The dam is bounded by hills and forests, a perfect place for outing. Mayurakshi Bhawan Bungalow and Inspection Bungalow offer excellent and comfortable accommodation in the village. By road, Masanjore is connected with Vakreshwara (59 km), Sainthia (50 km), Tarapith (70 km), Rampurhat (62 km) and Deoghar (98 km). Masanjor dam or the Pearson dam on river Mayurakshi is a picturesque place on foot hills of long range of forest clad parallel hill ranges. This place is basically a hydro electric power generating center but in the process of time it has become popular center for the tourist. With the beautiful garden on the down hill and two beautiful Dak-bunglows on the bank of the river at charm to its beauty.

It is a hot water Spring, situated at a distance of 15 km from the district headquarters of Dumka. It is rounded by small mounts, beautiful, attractive and greenish natural atmosphere. The water of spring is very clear and healthy.

This is a very beautiful picnic spot. Just 13 km from the Dumka town, you find a rare view of natural beauty with small hills,beside that smooth flowing Mayurakshi River.

Running south from pakur to godda. The hill range of Dumka seen parallel and terminate in th Mangalbhanga hill. To the south east of Dumka is Ramgarh hills further west two parallel renges of hills also stretch in an easterly direction from Masanjor to Ranibhal. Beside hill ranges some hillocks are also in like (i) Lagwa hil at Nonihat under which lies the Tatloi hot water stream (ii) Hijla hill top. (iii) Sapchala hill top. (iv) Chuto pahadi. Maluti (Temple village on way to Rampurhat).

It is a small picnic spot about 5 km to the south of Dumka. It has a beautiful park, facilities for boating and a small hill.

The first Chief Minister of Jharkhand, Babulal Marandi, hailed from Dumka constituency. In the year 2000, when Jharkhand was carved out of Bihar, NDA came to power in Jharkhand with Marandi as the Chief Minister. However, he had to resign and make way for Arjun Munda (BJP) for the post in 2002 following pressure exerted by coalition allies primarily JD(U). Recently, he formed his own party with Stephan Marandi, another political leader of the state.

Shibu Soren is another familiar and famous politician associated with Dumka. His political career has been mired in controversies, starting since Indira Gandhi's prime ministership. Recently, he has been sent to Dumka jail after being convicted of murdering his private secretary Shashinath Jha. But, the Delhi High Court acquitted him of the murder charge of his private secretary because of the lack of the evidences. A number of cases is still pending before the Jamtara Session Court and some of the other courts of the Jharkhand.

The district has some good schools and colleges which have been imparting the value of education. Zila School, National School, Govt. Girls School, Dumka Central School, +2 Jharkhand Public School are the Schools which provide education till +2 level. Other schools of repute which provide education till secondary level are Sido Kanhu High School, St. Teresa High school (for girls) and Holy Child, N.E.L.C. Don Bosco School, St. Joseph's High School. other schools of same repute are Ananda Marga School(kurwa),Modern Sainik School, Green Mount Academy, Jharkhand Public School etc. They are known for good standard of education. The town also boasts of having S. P. College and A. N. College which run under the S.K.M. University. S. P. College offers undergraduate, graduate as well as Post graduate courses in various disciplines of science, Arts and commerce. Recently B.Ed. course has also been introduced. It has IGNOU study Centre as well which provides for teaching of IGNOU courses.Another well known University is Birsa Agricultural University which provides technical Education related to Agriculture.

The town has very good colleges and schools. S.P. College leads the pack and offers graduation and Post graduation in social science, pure science, economics, mathematics and other subjects. Dumka also has a polytechnic and an ITI but unfortunately no engineering, medical or dental college, so those who wish to pursue a career in these subjects have to move out of the city. A good number of schools are also there to provide the educational needs of the students of this locality.