Days in Europa is Skids's controversial 1979 second album. Initially released with an "aryan" album cover reminiscent of the 1936 Olympics, complete with Germanic gothic-style lettering, this was quickly withdrawn and a new cover designed.[citation needed] At the same time the opportunity was taken to change the album tracklisting and re-mix some of the original songs. Some of the deleted songs re-surfaced on later albums.

Unlike some of the post-punk albums of the period, some of the songs tend towards a slower tempo. The songs often refer to events in, or imagery from, World War I and World War II.

The tracks that found their way onto the second (re-mixed) version of the album were given a glossier sound by Bruce Fairbairn, allegedly for the US market.[citation needed]

All tracks composed by Jobson/Adamson unless indicated otherwise. 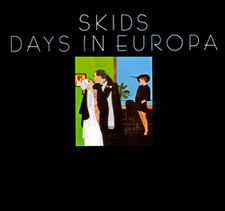 Cover of the second version of Days in Europa.

All tracks composed by Jobson/Adamson unless indicated otherwise.

This second release's cover includes the controversial first cover as a picture on the wall behind the woman in white's head. On the back of the cover the illustration is repeated, only with the withdrawn release's picture on the wall being replaced with that of the earlier Scared to Dance album. The track Pros and the Cons is removed, and Masquerade, also one of their single releases, is added.

This CD release contains the same cover art and tracklisting as the 1979 original, and adds seven bonus tracks:

The original version of "Out of Town", released as the B-side to the "Masquerade" single, is unavailable on CD.[2]

It is a sweet and glorious thing (to die for one's country).

Dulce et Decorum Est is also the name of poem by Wilfred Owen.

Thanatos is the Greek word for "death" and ancient Greek god of death, and is used in Freudian psychology to refer to the death wish/destructive urge, as opposed to Eros, the reproductive urge.