Stuck in a Moment You Can't Get Out Of

Stuck in a Moment You Can't Get Out Of 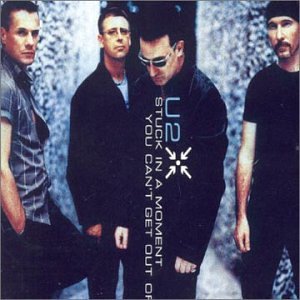 "Stuck in a Moment You Can't Get Out Of" is a single release from 's 2000 album, "". It has gospel-tinged melodies and saccharine guitar leads. has remarked that the song is inspired by a fictional conversation he has with late friend about . It won the "" in 2002.

U2's lead singer wrote the song about the of his close friend , the late lead singer of the band . The song is written in the form of an argument about suicide in which Bono tries to convince Hutchence of the act's foolishness. [http://hem.bredband.net/steverud/U2MoL/ATYCLB/stuck.html]

Bono characterized the song as a fight between friends, which he felt guilty for never having with Hutchence. "It's a row between mates. You're kinda trying to wake them up out of an idea. In my case it's a row I didn't have while he was alive. I feel the biggest respect I could pay to him was not to write some stupid soppy fucking song, so I wrote a really tough, nasty little number, slapping him around the head. And I'm sorry, but that's how it came out of me." --Bono, in "" (November 3, 2005 issue).

Released only in , featuring most from both regular CD releases.

A -only release on late , also available on CD.

The "Stuck in a Moment You Can't Get Out Of" singles were backed with the following :

Produced by Flood and , this song was recorded after the . Its lyrics include a reference to the hotel in , ("Avenue Atantico, 1702/She's coco butter, baby she's the glue"), where U2 stayed when they played in Rio in .

This remix was released, in a shorter version, in a promotional along with an issue of .

This was a performance in , for the American TV show, during U2's promotional tour of the "All That You Can't Leave Behind" album.

The first public listening of "All That You Can't Leave Behind" in the famous nightclub was capped with an impromptu performance by U2, the first since the end of the PopMart Tour. These two songs were lifted from that performance.

This performance from the was transmitted live for the "" TV special, which was later released in .

This remix was done by .

There are three versions of this song:

*The album version, which appears on "All That You Can't Leave Behind". This is the original version of the song.
*The acoustic version, which appears on the single, as well as in the "" single and the "7" EP. The same vocal track is used with a different, stripped-down arrangement.
*The radio edit, which was used in the promotional radio singles in the US. Part of the first verse and the outro are edited out, leaving the song with about three and a half minutes.

Two s were filmed for the song.

The most well-known version, directed by , features an game between the "Flys" [sic] and the "Lemons" filmed at the , and contains various inside jokes and references to the band's past, such as the team names themselves - which were the titles of two U2 singles released in the '90s - and the coaches' names - Dave Evans, coach of the Lemons, is the real name of and the Flys' coach is , being named after U2's manager. John Madden is the guest star, who opens the video welcoming viewers back to the "unforgettable" Firedome, "on this Sunday, bloody Sunday." The rookie kicker for the Flys, (which is 's real name), played by , tries to kick a field goal, but misses when it hit the post. The video shows it over and over again from different perspectives. During the video, a starts with Bono in the centre. In this scene, the director gave Bono's motivation as "appear more " - possibly a reference to the light in which his fans see him and his deep-seated religious beliefs. A fan sitting beside Bono in the video wears an tee-shirt, a possible reference to the feeling of goodwill toward the city that has followed the band since their first US tour in the early 1980s. The scene is similar to the end of , where kicker narrowly missed a 47-yard field goal attempt, resulting in a one point loss to the .

The other video, directed by , shows Bono being thrown out of a van several times, as if "stuck in a moment". At the end of the video, the rest of the band helps him up.

* [http://www.u2wanderer.org/disco/sing046.html Discography entry at U2 Wanderer] --Comprehensive details on various editions, cover scans, lyrics, and more.
* [http://www.u2tour.de/discographie/videos/Stuck_In_A_Moment_You_Cant_Get_Out_Of_US_Version.html Videography entry at U2tours.de] --Has some screen captures of the US video. Written in German.