According to Paul van Buren, a Death of God theologian, the word God itself is “either meaningless or misleading”.[1] He contends that it is impossible to think about God. Van Buren says that

“we cannot identify anything which will count for or against the truth of our statements concerning ‘God’”.[1]

“every man today who is open to experience knows that God is absent, but only the Christian knows that God is dead, that the death of God is a final and irrevocable event, and that God’s death has actualized in our history a new and liberated humanity”.[3]

Theologians including Altizer and Lyas looked at the scientific, empirical culture of today and tried to find religion’s place in it. In Altizer’s words,

“No longer can faith and the world exist in mutual isolation... the radical Christian condemns all forms of faith that are disengaged with the world”.[3]

He goes on to say that our response to atheism should be one of “acceptance and affirmation”.[3] Colin Lyas, a Philosophy lecturer at Lancaster University, stated that

“Christian atheists are united also in the belief that any satisfactory answer to these problems must be an answer that will make life tolerable in this world, here and now and which will direct attention to the social and other problems of this life”.[2]

Separation from the church

Altizer has said that

“the radical Christian... believes that the ecclesiastical tradition has ceased to be Christian”.[3]

He believed that orthodox Christianity no longer had any meaning to people because it did not discuss Christianity within the context of contemporary theology. Christian atheists want to be completely separated from most orthodox Christian beliefs and biblical traditions.[4] Altizer states that a faith will not be completely pure if it is open to modern culture. This faith “can never identify itself with an ecclesiastical tradition or with a given doctrinal or ritual form.” He goes on to say that faith cannot “have any final assurance as to what it means to be a Christian”.[3] Altizer said, “We must not, he says, seek for the sacred by saying ‘no’ to the radical profanity of our age, but by saying ‘yes’ to it”.[4] They see religions which withdraw from the world as moving away from truth. This is part of the reason why they see the existence of God as counter progressive. Altizer wrote of God as the enemy to man because mankind could never reach its fullest potential while God existed.[3] He went on to state that “to cling to the Christian God in our time is to evade the human situation of our century and to renounce the inevitable suffering which is its lot”.[3]

The centrality of Jesus 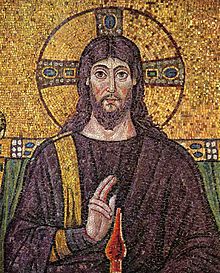 6th-century mosaic of Jesus at Basilica of Sant'Apollinare Nuovo in Ravenna.

Jesus, although not seen as divine, is still a central feature of Christian atheism. Most Christian atheists think of Jesus as a wise and good man, accepting his moral teachings but rejecting the idea of his divinity. Hamilton said that to the Christian atheist, Jesus is not really the foundation of faith; instead he is a “place to be, a standpoint”.[4] Christian atheists look to Jesus as an example of what a Christian should be, but they do not see him as a god.

Hamilton wrote that following Jesus means being “alongside the neighbor, being for him”,[4] and that to follow Jesus means to be human, to help other humans, and to further mankind.

In the Protestant Church in the Netherlands (PKN) and several other smaller denominations of the Netherlands, 1 in 6 clergy are either agnostic or atheist.[5] A reverend of the PKN, Klaas Hendrikse has described God as "a word for experience, or human experience" and said that Jesus may have never existed.[5]

Catholic atheism is a belief in which the culture, traditions, rituals and norms of Catholicism are accepted but the idea of the existence of God is rejected.