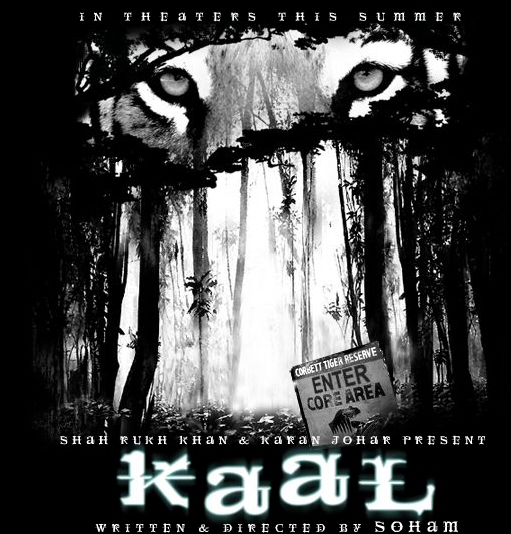 "Kaal" (: काल, : کال, : "The Time of Doom" is a film, released in on , . The movie is directed by Soham Shah, who has also written its and . and have produced the movie. The movie is based around the story of a wildlife expert, his wife and a group of friends who battle against supernatural creatures in the for their lives. It stars , John Abraham, , and .

Krish Thapar (John Abraham), a conservationist for the International Wildlife Welfare, and his wife Riya. (), are asked to find out the reason behind the mysterious deaths caused by man-eating Tigers in the past two months in in .

Dev () with his group of friends including his girlfriend, Ishika () come for an trip at the weekend.Dev is in love with Ishika. Blocked roads divert them from going to the farmhouse they had planned too. Instead, they are taken towards India's biggest jungle to hunt on Sajjid's (Kushaal Paunjabi) insistence.

The two groups bond together but the same night the fear that revolved around the jungle comes alive. Their friends and guide are butchered by unknown creatures and thus starts a journey with fear, panic and trauma as death is felt in the air.

The gang comes across Kali Pratap Singh () who takes the challenge of helping them escape out of the jungle, which has never been so alive. In this run for life the only escape is to escape the time of death - Kaal.

The film gradually unfolds the shocking mystery that Kali is a supernatural being. When Dev and Kali look into the well for Riyas's body, Dev observes that Kali's reflection is not seen in the water. When Dev checks his handycam for previous video recordings, he finds that he is nowhere seen in the videos. This event reveals that Kali is not a human being, but actually a ghost.

# Sajjid - Beheaded
# Vishal - Car Explosion
# Riya - foot strangled with well's rope , falls down and is pulled towards the well and then as she is pulled nearer to the well, gets butchered by a huge sharp pointed stone and is finally pulled inside the well with the rope.
# Travel Guide - Eaten Up Alive
# Driver - Eaten up by tiger
# Kali Pratap Singh - Eaten Up By Tigers
# Police Officer -Butchered

* This was meant to be 's comeback venture, alongside her husband Ajay Devgan. However, she couldn't accept due to other commitments.

* Karan Johar claims he was inspired to do a thriller instead of his usual family film by , who had broken out of their romantic film mold by doing the action film "" (2004). He paid tribute to Chopra by casting that film's stars, John Abraham and Esha Deol.

* The antagonist's name, Kali Pratap Singh, is a reference to "" (2004), where Shahrukh Khan and Karan Johar had respectively acted and designed the costumes.

* Features Shahrukh Khan and in an item number at the very beginning of the movie.

* The movie is directed by Soham Shah who is Karan Johar's assistant. He has also been assistant to in "" (2003).

* was originally offered the role of Dev Malhothra.

* was offered to do the item number but she declined.