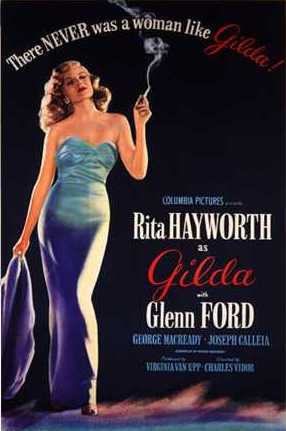 "Gilda" (1946) is a directed by . It stars and in her signature role as the ultimate "." The film was noted for cinematographer 's lush photography, costume designer ' sexy wardrobe for Hayworth (particularly for the dance numbers), and choreographer 's staging of "Put the Blame on Mame" and "Amado Mío." [imdb title|id=0038559|title=Gilda.]

In , , small-time hood Johnny Farrell () craps and wins a lot of money. He is then rescued by stranger Ballin Mundson () from a robbery attempt. Mundson invites him to an illegal high-class casino, but warns him not to try cheating there. Farrell ignores his advice and is taken by two men to see the casino's owner, who turns out to be Farrell's benefactor. Farrell talks Mundson into hiring him and quickly earns his confidence. However, the snobbish washroom attendant, Uncle Pio (), keeps calling him "peasant".

One day, Mundson returns from a trip with a beautiful new wife, singer Gilda (). Unaware that she was once Farrell’s lover, Mundson assigns Farrell to keep an eye on her. Farrell keeps track of her cavorting with men at all hours of the night, his loathing for her intensifying.

Meanwhile, Mundson is visited by two s. Their secret organization had financed a , with everything put in Mundson's name to hide their connection to it. However, when they decide it is safe to take over, Mundson refuses to transfer ownership to his backers. The Argentine secret police is interested in the Germans; agent Obregon () introduces himself to Farrell to try to obtain information, but the American knows nothing. The Nazis return later, with no better results; Mundson shoots and kills one of them.

That same night, at Mundson's house, Farrell and Gilda describe how much they hate each other, then end up kissing. Mundson arrives at that moment, then flees to a waiting airplane. Farrell and Obregon witness its short flight; the plane explodes shortly after takeoff and plummets into the water.

With Mundson dead, Gilda inherits his estate. Farrell marries her, but not out of love. He stays away, but has her guarded day and night out of hatred and also loyalty to Mundson. Gilda tries to escape the tortured love/hate relationship, but fails. Finally, Obregon tells Farrell that Gilda was never truly unfaithful to Mundson or to him, prompting Farrell to try to reconcile with her.

At that moment, Mundson reappears, armed with a gun. He had faked his death to deceive the Nazis, parachuting out of the plane undetected. Mundson tells them he will have to kill them both, but Uncle Pio manages to fatally stab him in the back. Obregon shows up and confiscates the estate for the government. Farrell and Gilda are free to leave the country.

"Gilda" was filmed between September and December, 1945.

Hayworth's introductory scene was shot twice. While the action of her popping her head into the frame and the subsequent dialogue remains the same, she is dressed in different costumes--in a striped blouse and dark skirt in one film print, and the more famous off-the-shoulder dressing gown in the other.

* as Gilda Mundson Farrell
* as Johnny Farrell / Narrator
* as Ballin Mundson
* as Det. Maurice Obregon
* as Uncle Pio
* as Casey
* as Capt. Delgado
* Mark Roberts as Gabe Evans
* as German
* as Thomas Langford
* as German
* as Little man
* as Huerta
* as Maria