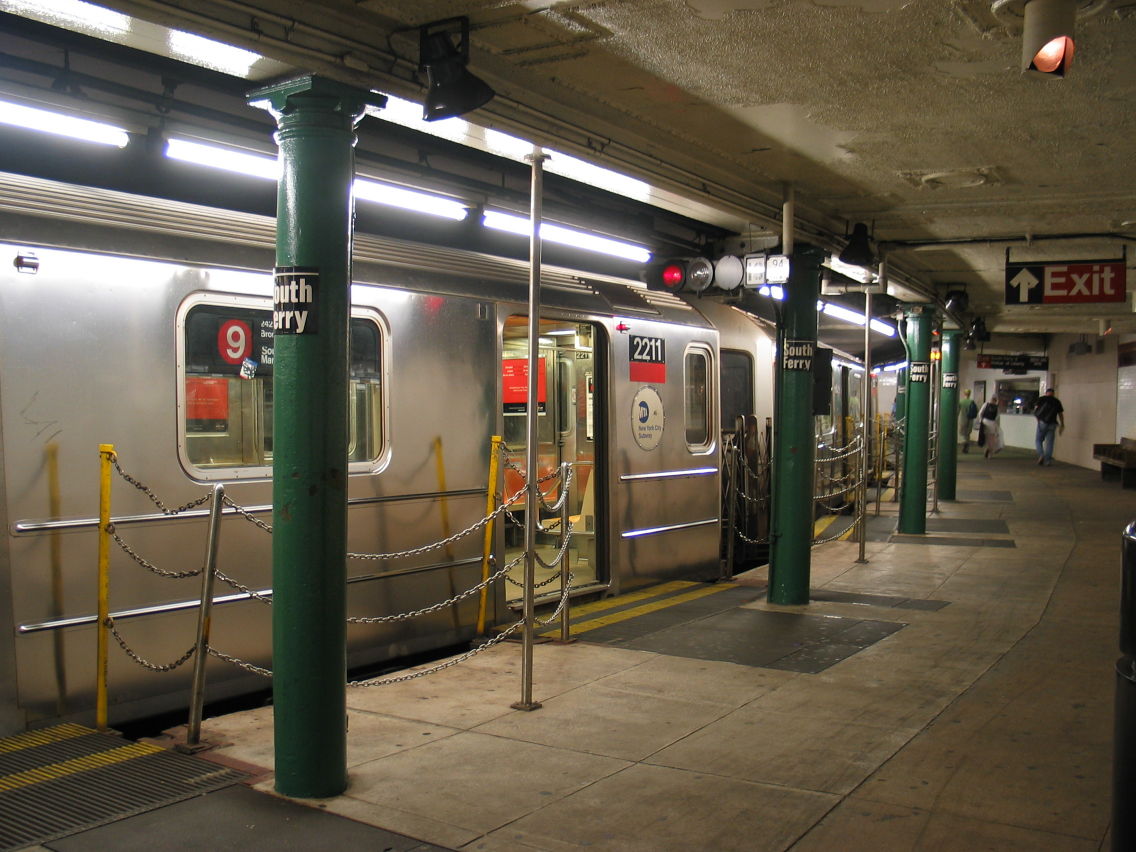 South Ferry is a station on the of the . It is the southern terminal of the NYCS|1 service. The single platform is on the outside of the outer track of a two-track loop. This platform is short (rear five cars cannot load or unload). s are used to bridge the gap between the platform and the doors. Spray nozzles lubricate the track to reduce the friction caused by the tight curve. The sharp curvature slows train operation and generates loud metallic scraping noise. [ [http://www.mta.nyc.ny.us/capconstr/sft/documents/chapters/1_purpose_and_need.pdf MTA South Ferry FEIS, 2004, p.1-5] ]

In mid-2005, construction commenced on a new South Ferry station, which will be located underneath the present one. It will be built as an ADA-compliant, two-track terminal, which will allow all ten cars of the train to platform so that all the doors can be opened. The new station will also have a free transfer to the Whitehall Street–South Ferry station (NYCS Broadway south|time=show) on the . According to the latest update from the Lower Manhattan Development Corporation, the new station will be opened for passengers in December 2008, and landscaping for Peter Minuet Plaza will be completed by February 2009. [ [http://www.lowermanhattan.info/construction/project_updates/south_ferry_subway_station_70317.aspx LowerManhattan.info website, retrieved October 10, 2008] ] The new South Ferry terminal will be used for Broadway–Seventh Avenue trains only; it will not serve Lexington Avenue trains. The current loop platforms will be disused when the new terminal opens, however, both the inner and outer tracks will still be used for train storage and turn arounds. In November and December 2005, centuries-old walls were discovered in two places in the proposed right-of-way. The walls will be placed on display in the park, and in the new terminal when construction is completed. [http://www.mta.info/capconstr/sft/archaeology.htm]

As a temporary measure, direct access is available to the adjacent South Ferry, including the .

The outer platform is used by trains, but it was originally built for the . When the Broadway–Seventh Avenue Line opened in 1918, it started using the outer platform, and the Lexington Avenue Line was moved to a new inner track and inner platform. This platform has an even sharper curve, and only the center doors opened at South Ferry, with special arched openings in a wall between the platform and track at the locations of the doors.

In the late 1950s, the IRT division began to use mostly R-type cars, which could not have only the center doors opened, and NYCS|5 trains (which ended at South Ferry evenings and weekends only) and NYCS|6 trains (which ended at South Ferry late nights) were rerouted to the outer loop. The , which ran weekdays and at first also late nights, continued to use the inner loop, running to the west platform at Bowling Green until 1977, when the inner platform was closed and Lexington Avenue trains stopped using the outer loop. A pair of specially modified R12 cars were used starting in the late 1960s until the service ended. These cars had two different door controls; the first opened the outer two sets of doors while the second opened the center set of doors only.

There was never a free transfer between the two platforms. The inner track is now used to turn NYCS|5 trains at all times except rush hours (when they are extended into ) and late nights (when they don't run into at all).

The South Ferry loop plays an important role in the movie "The Taking of Pelham One Two Three".