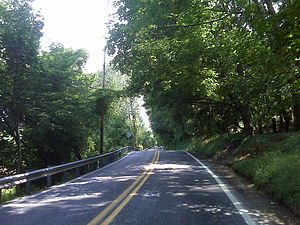 Cromwell Bridge Road, formerly Maryland Route 567, is a two-lane roadway in the Towson, Maryland, area of the United States. The road begins at Providence Road in Towson, and continues past the Baltimore Beltway for several miles to its end, where it splits, a left turn going onto Glen Arm Road and a right turn onto Cub Hill Road.

Cromwell Bridge Road, which is exit 29 off the Baltimore Beltway in a set of ramps shared with Loch Raven Boulevard, is mostly undeveloped. A short section of the route between Providence Road and about a block past the beltway is filled with commercial development including office buildings, hotels, a park-and-ride lot that serves as the main northern terminus for Maryland Transit Administration bus route 3 and 104 and its two major landmarks: Loch Raven High School and Rock City Church.

The remainder of the road, which has few intersections, is designated as a scenic byway, mostly lined with trees, except for a portion where the Loch Raven Reservoir is visible.

That part of Cromwell Bridge Road between present-day Satyr Hill and Glen Arm/Cub Hill Road was once part of the original Old Harford Road when the latter was the main route of choice between parts of southern Harford County and the port of Baltimore. In fact, the level bed, numerous bridge abutments, and some track for the original Maryland and Pennsylvania Railroad line can still be seen from some portions of the road and have remained there undisturbed since its abandonment in 1958.

This portion of the road came to media attention in 2007, when Baltimore Gas and Electric Company (BGE) began an operation to clear the trees lining the road to prevent them from interfering with power lines and to make the road safe for motorists.[2] After complaints from area residents over how this would impact on the road's status as a scenic byway, BGE agreed to temporarily halt cutting down these trees.[3]