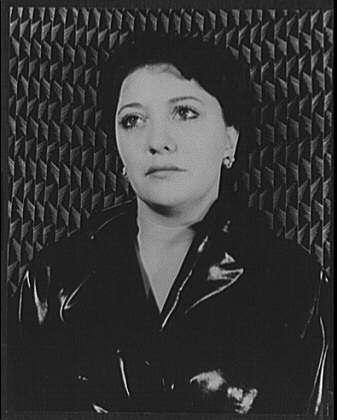 Helen Morgan (August 2, 1900 – October 9, 1941) was an American singer and actress who worked in films and on the stage. A quintessential , she made a big splash in the Chicago club scene in the 1920s. She starred as Julie LaVerne in the original Broadway production of Hammerstein and Kern's musical "" in 1927, and appeared in its two subsequent film adaptations, in 1929 (prologue only) and in 1936, becoming firmly associated with the role. She suffered from bouts of alcoholism, and despite her notable success in the title role of another Hammerstein and Hart's Broadway musical, "" (1929), her stage career was relatively short. Helen Morgan died from of at the age of 41. She was portrayed in the 1957 "".

Helen was born 'Helen Riggins' on August 2, 1900 in rural . Her father was a farmer and a schoolteacher. After her mother remarried, she changed the last name to 'Morgan'. Her mother's second marriage ended in divorce, and she moved to Chicago with her daughter. Helen never finished school beyond the eighth grade, and worked a variety of jobs just to get by. In 1923 she entered the Miss Montreal contest, even going to New York to meet Katherine Campbell, but when she returned, her American citizenship was discovered and she was disqualified. She also worked as an extra in films. By the age of twenty Morgan had taken voice lessons and started singing in speakeasies in .

Helen Morgan's high, thin, and somewhat wobbly voice was not fashionable during the 1920s for the kind of songs that she specialized in, but nevertheless she became a wildly popular . Her heart bled about hard living and heartbreak onto her accompanist's piano. This draped-over-the-piano look became her signature look while performing at Billy Rose's Backstage Club in 1925. In spite of the National Prohibition Act of 1919 outlawing alcohol in the United States, Morgan became a heavy drinker and was often reportedly drunk during these performances.Fact|date=July 2008 During this period several Chicago gangsters tried to help fund her various attempts to open her own nightclub. However, Prohibition agents kept too strict an eye on her and these attempts failed.

In 1927 Helen Morgan appeared as Julie LaVerne in the original cast of "", her best-known role. She sang "Bill" (lyrics by and Oscar Hammerstein) and "" in two stage runs and two film productions of the famous musical over a span of 11 years. (In the first film version of "Show Boat", made in 1929, Morgan appeared only in the song prologue; played Julie in the film proper, which was mostly silent. However, Morgan did play the role in the 1936 film version of the musical.)

After appearing in the 1929 film version of "Show Boat", Morgan went on to star in Kern and Hammerstein's Broadway musical, "Sweet Adeline". The title was a pun on the famous song. In the musical, Morgan introduced the songs "Why Was I Born" and "Don't Ever Leave Me". Oddly enough, when "Sweet Adeline" was filmed in 1934, Morgan's role went to her future "Show Boat" co-star, , who possessed a lovely soprano, but was certainly not a torch singer.

Morgan was noticed by while dancing in the chorus of his production of "Sally" in 1923 and she went on to perform with the "" in 1931, the Follies' last active year. During this period she studied music at the in her free time.

In the late 1930s Morgan was signed up for a show at Chicago's Loop Theater. She also spent time at her farm in . Alcoholism plagued her and she was hospitalized in late 1940. Her career underwent something of a comeback in 1941, thanks to the help of manager Lloyd Johnson. However, the years of alcohol abuse had taken their toll. She collapsed onstage during a performance of "George White's Scandals of 1942" and died in Chicago of cirrhosis of the liver on October 8, 1941.

Morgan was married three times, to a fan Lowell Army, whom she met at a stage door while she was performing in "Sally", to Maurice "Buddy" Maschke (they married on May 15, 1933 and divorced several years later), and to Lloyd Johnson, whom she married on July 27, 1941.

Morgan was portrayed by in a 1957 "" drama, directed by , and won an for her performance. That same year, the "" starred as Morgan.