The Panzerfaust 3 is a modern and disposable recoilless RPG anti-tank weapon developed between 1978 and 1985 and put into service by the Bundeswehr in 1992. It was first ordered in 1973 to provide West German infantry with an effective weapon against contemporary Soviet armour thereby replacing West Germany's aging PzF 44 Lanze rocket launchers.

The Panzerfaust 3 can be fired from enclosed spaces since it does not have a significant backblast; The rear of the tube, filled with plastic granulate, minimises the blast effect by the so-called recoilless countermass principle. The booster propellant for the projectile in its tube is ignited by a bolt via a spring mechanism. Once ejected from the launcher, the projectile coasts a safe distance and then the rocket motor is ignited boosting it to its maximum speed, after which it coasts until impact.

As safety precautions, the built-in fuse for the warhead is released by a safety mechanism. This arms the warhead after a flight distance of approximately five meters. Once armed, the warhead will detonate on impact, and as a safety when the rocket's propellant runs out. This safeguards against live ammunition staying around and causing hazards to all in the future. The Panzerfaust 3's name dates back to the Panzerfaust used by the German army in World War II, which consisted of a small, disposable preloaded launch tube firing a high explosive anti-tank warhead, operated by a single soldier.

The main drawback is that it has only a single shot and soldiers have to get dangerously close to penetrate heavily armoured targets. Many soldiers also found it very heavy and cumbersome, and its firing mechanism and tube tended to get damaged and jam under battlefield conditions. In addition, the rocket warhead itself was found to be ineffective against heavy armour and armour of newer types and had to be redesigned.

In consequence, the improved PzF 3-T replaced the original model in the late 1990s, introducing a dual hollow charge "tandem" warhead to defeat explosive reactive armour. This means that the spike projecting from the warhead itself also contains an explosive charge to set off the reactive armour and free the path to the real armour for the main warhead. The latest incarnation of the Panzerfaust 3, the PzF 3-IT-600, can be fired from ranges up to 600 meters thanks to an advanced computer-assisted sighting and targeting mechanism.

As of 2005, there were two additional models in the development or testing stage, both relying on smaller and therefore lighter warheads. Those were the RGW (Rückstoßfreie Granatwaffe, Recoilless Grenade Weapon — which would make it just like the original in name and operation.) in calibres 60 and 90 millimetres. Both new weapons are expected to help facilitate the transition in German military doctrine from preparation for major tank battles to urban and low-level warfare. 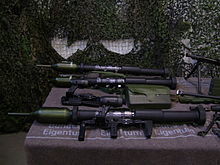 There are three different versions of the Panzerfaust 3:

The regular firing platform has a purely optical sight, weighing 2.3 kg (5.1 lb). All ranges listed in the article are for the optical sight. A new sight called Dynarange is currently being procured as part of the German Infantryman of the Future project. Essentially this is a computer controlled aiming sight with range finder. It is meant to cope with the fact that some soldiers have a hard time handling the regular sight, as its scope is quite complex to the untrained eye. Also, it increases the weapon's effective range to 600.0 m (1,968.5 ft) against moving and stationary targets. Dynarange is already in service with the Royal Netherlands Marine Corps.[4]

The Panzerfaust 3 is distributed in a special package including spare parts and a cleaning kit. The package contains a launcher, ejector and spring, extractor, dummy extractor plug, bolt-head retaining pin, plastic cleaning rod with brass tip, bore and chamber brushes, camel's hair brush and a prismatic bore scope. It takes several minutes to assemble and load the launcher.