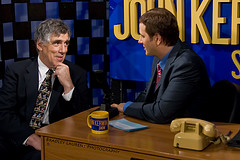 "The John Kerwin Show" is a late-night filmed in and broadcast in Santa Monica, , and on networks.

In 2006, host and the show received a special Commendation from Los Angeles Mayor on the occasion of the show's 6th anniversary on the air and 60th episode.

The show is produced by Rob Baker. Nicholas Burns is the show's Music Director and drummer. Don Margolin is the show's announcer.

Previous episodes of the show are archived on YouTube.com.