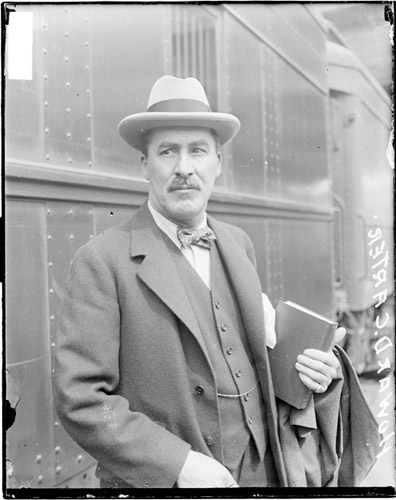 Howard Carter ( ndash ) was an English and Egyptologist, noted as a primary discoverer of the tomb of .

In 1891, at the age of 17, Carter began studying inscriptions and paintings in . He worked on the excavation of , the grave site of the princes of Middle Egypt, c. 2000 BC. Later he came under the tutelage of .

He is also famous for finding the remains of Queen 's tomb in . In 1899, Carter was offered a job working for the (EAS), from which he resigned as a result of a dispute between Egyptian site guards and a group of French tourists in 1905.

In 1907, after several hard years, Carter was introduced to Lord Carnarvon. Soon, Carter was supervising all of Carnarvon's s.

Carnarvon financed Carter's search for the tomb of a previously unknown , , whose existence Carter had discovered. After a few months of fruitless searching, Carnarvon was becoming dissatisfied with the lack of return from his investment and, in 1922, he gave Carter one more season of funding to find the tomb.On , Carter found the steps leading to Tutankhamun's tomb (subsequently designated ), by far the best preserved and most intact pharaonic tomb ever found in the . He wired Carnarvon to come, and on , with Carnarvon, Carnarvon's daughter, and others in attendance, Carter made the famous "tiny breach in the top left hand corner" of the doorway, and was able to peer in by the light of a candle and see that many of the gold and ebony treasures were still in place. He did not yet know at that point whether it was "a tomb or merely a cache", but he did see a promising sealed doorway between two sentinel statues. When Carnarvon asked him if he saw anything, Carter replied: "Yes, wonderful things". [ [http://www.crystalinks.com/tutstomb.html King Tutankhamen's Tomb - Crystalinks ] ]

The next several weeks were spent carefully cataloging the contents of the antechamber. On , , Carter opened the sealed doorway, and found that it did indeed lead to a burial chamber, and he got his first glimpse of the of Tutankhamun.

Carter's own papers suggest that he, Lord Carnarvon and Lady Evelyn Herbert entered the tomb shortly after its discovery – without waiting for the arrival of Egyptian officials (as stipulated in their excavation permit).Fact|date= January 2008 Artifacts and jewelry from the tomb were found in Carter's home after his death, suggesting that he had violated his permit.Fact| date= January 2008

When he discovered the tomb, it was said he also found 150 gold amulets and even a death mask weighing 11 kilograms, with which the pharaoh was buried. Carter was thought to have used an axe to retrieve the gold charms and the mummy was broken into 18 pieces.Fact| date= January 2008 Due to the poor archaeological knowledge at the time, Carter left the mummy for hours without protection under the sun (in November, more than 35 degrees Celsius).Fact| date= January 2008

Following his extensive finds, Howard Carter retired from archeology and became a collector. He visited the (USA) in 1924, and gave a series of illustrated lectures in New York City which were attended by very large and enthusiastic audiences, sparking in the United States. He died of , a type of cancer, in on , [ [http://www.nytimes.com/learning/general/onthisday/bday/0509.html Howard Carter, 66, Egyptologist, Dies ] ] at the age of 64. The archaeologist's death, so long after the opening of the tomb despite being the leader of the expedition, is the most common piece of evidence put forward by skeptics to refute the idea of a curse (the "") plaguing the party that violated Tutankhamen's tomb. His living descendants include Valerie Darroch, née Carter, and her family.

Howard Carter is buried in in West London. On his gravestone is written: "May your spirit live, May you spend millions of years, You who love Thebes, Sitting with your face to the north wind, Your eyes beholding happiness" [from the Wishing Cup of ] and "O night, spread thy wings over me as the imperishable stars". [C.f the prayer to the Goddess Nut found on the lids of New Kingdom coffins: "O my mother Nut, spread yourself over me, so that I may be placed among the imperishable stars and may never die." (http://www.swan.ac.uk/egypt/events/womentext.htm)]

Carter has been portrayed by the following actors in film and television productions;

He appears as a character throughout most of the "" series of books by '' (a pseudonym of Egyptologist Dr Barbara Mertz).

"In Search of the Pharaohs" - a 30-minute for narrator, junior choir and piano by composer , commissioned by the which uses extracts from Carter's diaries as its text.Fact|date=February 2007