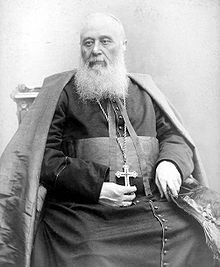 Charles Martial Allemand Lavigerie (31 October 1825–26 November 1892) was a French cardinal, archbishop of Carthage and Algiers and primate of Africa.

Born at Bayonne, he was educated at St Sulpice, Paris. Ordained a priest in 1849, he was professor of ecclesiastical history at the Sorbonne from 1854 to 1856.[1]

In 1856, he accepted the direction of the schools of the East, and was thus for the first time brought into contact with the Islamic world. C'est là, he wrote, que j'ai connu enfin ma vocation. (It was there that I learned my calling.) Activity in missionary work, especially in alleviating the distresses of the victims of the Druzes, soon brought him prominently into notice. He was made a chevalier of the Legion of Honor and, in October 1861, shortly after his return to Europe, was appointed French auditor at Rome.

Two years later he was raised to the see of Nancy, where he remained for four years, during which the diocese became one of the best administered in France. While bishop of Nancy he met Marshal MacMahon, then governor-general of Algeria, who in 1866 offered him the see of Algiers, just raised to an archbishopric. Lavigerie landed in Africa on the 11th of May 1868, when the great famine was already making itself felt, and he began in November to collect the orphans into villages. This action, however, did not meet with the approval of MacMahon, who feared that the Arabs would resent it as an infraction of the religious peace, and thought that the Muslim faith, being a state institution in Algeria, ought to be protected from proselytism; so it was intimated to the prelate that his sole duty was to minister to the colonists. Lavigerie, however, continued his self-imposed task, refused the archbishopric of Lyon, which was offered to him by the emperor, and won his point. 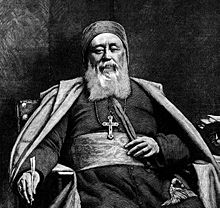 Cardinal Charles Lavigerie, from an 1888 engraving Ch. Baude from a painting by Bonnat

Contact with the natives during the famine caused Lavigerie to entertain exaggerated hopes for their general conversion, and his enthusiasm was such that he offered to resign his archbishopric in order to devote himself entirely to the missions. Pope Pius IX refused this, but granted him a coadjutor, and placed the whole of equatorial Africa under his charge. In 1870 Lavigerie warmly supported papal infallibility. In 1871 he was twice a candidate for the National Assembly, but was defeated. In 1874 he founded the Sahara and Sudan mission, and sent missionaries to Tunis, Tripoli, East Africa and the Congo. The order of African missionaries thus founded, for which Lavigerie himself drew up the rule, has since then become famous under various translations of the French Pères Blancs or White Fathers, after the white Arab dress they wore. Their official name is La Société de Missionnaires d'Afrique (Society of missionaries of Africa).

From 1881 to 1884 his activity in Tunisia so raised the prestige of France that it drew from Gambetta the celebrated declaration, L'Anticléricalisme n'est pas un article d'exportation, and led to the exemption of Algeria from the application of the decrees concerning the religious orders. On the 27th of March 1882 the dignity of cardinal was conferred upon Lavigerie, given the titulus of Sant'Agnese fuori le mura,[2] but the great object of his ambition was to restore the see of St Cyprian; and in that also he was successful, for by a bull of 10 November 1884 the metropolitan see of Carthage was re-erected, and Lavigerie received the pallium on the 25th of January 1885.

The later years of his life were spent in ardent anti-slavery propaganda, and his eloquence moved large audiences in London, as well as in Paris, Brussels and other parts of the continent. He hoped, by organizing a fraternity of armed laymen as pioneers, to restore fertility to the Sahara; but this community did not succeed, and was dissolved before his death. In 1890 Lavigerie appeared in the new character of a politician, and arranged with Pope Leo XIII to make an attempt to reconcile the church with the republic. He invited the officers of the Mediterranean squadron to lunch at Algiers, and, practically renouncing his monarchical sympathies, to which he clung as long as the comte de Chambord was alive, expressed his support of the republic, and emphasized it by having the Marseillaise played by a band of his Pères Blancs. The further steps in this evolution emanated from the pope, and Lavigerie, whose health now began to fail, receded comparatively into the background. He died at Algiers on the 26th of November 1892.

There is an abundance of literature published on the life of Charles Lavigerie, much of which has been written by members of the missionary order he founded, the White Fathers, and therefore can be biased. The best, and certainly most recent one, containing reference to other literature and source material, is by François Renault, Cardinal Lavigerie. Churchman, Prophet and Missionary (Londen 1994) (translation of: Le cardinal Lavigerie 1852-1892: L’Église, l’Afrique et la France (Parijs 1992)). Although being a White Father himself, and former archivist of the missionary order, Renault has been scholarly trained as an historian, having been a professor at the university of Abidjan.