The Menglianggu Campaign (孟良崮战役) was a campaign fought between the nationalists and the communists during the Chinese Civil War in the post-World War II era and resulted in communist victory. The campaign was later used by the communists as a specific battle example in their military science and history, as well as a propaganda piece. The battle mainly took place in Menglianggu of Linyi region in Shandong Province.

From March, 1947, nationalists abandoned their original plan of all-out assault on every communist position, instead, they adjusted their strategy to a much more realistic one: concentrating on attacking the communists in northern Shanxi and Shandong. In the Shandong theater of war, Generalissimo Chiang Kai-shek named Gu Zhutong, the commander-in-chief of the National Revolutionary Army as the commander-in-chief at the frontline, setting up his headquarter in Xuzhou. Gu Zhutong had 24 army-sized reorganized divisions totaling more than 60 division-sized reorganized brigades at his command, totaling 450,000+ troops. Out of the 450,000+ troops, over 330,000+ in 17 army-sized reorganized divisions totaling more than 43 division-sized reorganized brigades were deployed on the first line, organized into 3 corpses, the I, II, III Corps, spearheaded by the three crack units of the nationalist forces: 11th Reorganized Division, the 74th Reorganized Division and the 5th Army. Out of the 3 corpses, the I Corps commanded by Tang Enbo was the largest and strongest of all, with near 200,000 troops in 8 army-sized reorganized divisions totaling more than 20 division-sized reorganized brigades, and the I Corps was tasked with main assaults on the communists. Form late March, 1947 to mid April, 1947, nationalists succeeded taking control of the regions along the section of Jinpu railway from Xuzhou to Jinan, and the entire southern Shandong region.

The overconfident nationalists subsequently attacked the mountainous region in central Shandong in late April, 1947 but suffered a setback for their carelessness in Tai'an-Mengyin Campaign, losing over 24,000 troops. However, such setback was rather minor that it could be ignored: a mere 5% loss out of the total mighty force. The nationalist continued their original plan of push the arc-shaped frontline continuously deeper into central Shandong, and force the local communist force, the East China Field Army into a decisive battle in which the communist would be annihilated, or the communists would be forced to cross the Yellow River to flee north if they chose not to engage in such a battle. The nationalist I Corps would attack toward Yishui (沂水) and Tanbu (坦埠) regions, and then join forces with the nationalist II and III corpses to attack northward and eastward, destroying the communist base in Shandong. Five nationalist armies were deployed in the region border by Qingdao – Jinan Railway, Jinpu Railway and Tai'an in the south to support the three nationalist corpses, and another two nationalist army-sized reorganized divisions were deployed in Yi (峄) County and Zaozhuang respectively as reserves. 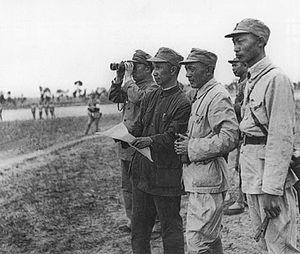 Su Yu (粟裕), the 2nd from the left, was surveying the battlefield before the Menglianggu Campaign started in 1947.

Commanders from Nationalist side included:

Commanders from Communist side included:

The strategies of both sides had been changed from their original versions as the battles progressed.

After the destruction of the entire 72nd Reorganized Division in late April, 1947 in the Tai'an-Mengyin Campaign, nationalists became very cautious and concentrated their forces in their movements afterward. This new tactic resulted from the painful experience learned earlier was so successful that the communist plan of defeating the nationalist offensive in Shandong by first destroying a portion of the nationalist force in the center of the frontline could no longer be realized. On May 4, 1947, communist high command radioed the East China Field Army that since it was impossible to fight large nationalist formations because the nationalists had concentrated their forces, the current tactic of waiting for an appropriate opportunity was very good. As long as there was the patient, there would always be the opportunity to annihilate the enemy. Two days later, the communist high command once again radioed the East China Field Army on May 6, 1947 to instruct the local communists on several important points: Never be impatient and never separate the concentrated forces, because as long as the concentrated force are ready to be mobilized, there would always be the opportunity to destroy the enemy. In according to the communist high command, the local communist commanders redeployed their forces in early May, 1947 by withdrew their main force eastward to the region to the east of Laiwu and Xintai, while the communist 2nd and 7th Columns originally planned to deployed to central China were redeployed to withdrew to Ju (莒) County, and the communist 6th Column withdrew to Pingyi (平邑) in southern Shandong. The communists were waiting to ambush the nationalist at the proper moment.

After nationalist commanders learned on May 14, 1947 that nationalist strongholds including Celestial Horse Mountain (Tian Ma Shan, 天马山), Horse Herding Pound (Ma Mu Chi, 马牧池) and the Mountain of Heap of Rocks (Lei Shi Shan, 磊石山) had fallen into the enemy hands, they became aware that the enemy was planning to surround and destroy the 74th Reorganized Division, which subsequently retreated toward Menglianggu (孟良崮) Mountains and Duo (垛) Village. The communists chased after the nationalists retreating southward, with the communist 4th Column and 9th Column in the front, and after a night of battle, they succeeded in taking the region along Tang Family’s Valley (Ta Jia Yu Zi, 唐家峪子) and Zhao Family’s City (赵家城子). At dawn of May 15, 1947, Duo (垛) Village, the last nationalist stronghold had fallen into the hands of communist 6th Column (with the help of communist 1st Column). After fierce battle in the Menglianggu (孟良崮) and Lu (芦) Mountains, the communist 8th Column succeeded in taking Ten Thousands Springs (Wan Quan, 万泉) Mountain, thus linked up with communist 1st Column and 6th Column. By the end of May 15, 1947, the communist 1st, 6th and 8th Columns had succeeded in achieving their objective of completely cutting off the nationalist 74th Reorganized Division, which was totally surrounded just like the communists had planned.

Fall of the nationalist headquarters

By this time, the communist reinforcement led by a deputy divisional commander named Dai Wenxian (戴文贤) arrived, and seeing Zhang Lingfu (张灵甫)’s cadaver, the communist deputy commander was very upset because capturing the nationalist commander alive would be much bigger and better political propaganda, and that was exactly how communists had wanted, so Dai Wenxian (戴文贤) asked angrily:”Who shot him? And Why?” Not knowing the nationalist officer killed was Zhang Lingfu (张灵甫), Ge Zhaotian (葛兆田) angrily shouted back at his deputy divisional commander:”Why wouldn’t I shoot him when he was shooting at me? I would shoot back even if he was Chiang Kai-shek!” The communist deputy divisional commander could not say anything more and had to excuse his soldier by asking him to help other to march the prisoners-of-war down the slope. Ge Zhaotian (葛兆田) did not find out that he had killed Zhang Lingfu (张灵甫) until years later. One of Zhang Lingfu (张灵甫)’s bodyguard named Zhu Fanyou (朱凡友) joined the communists after the campaign and became Ge Zhaotian (葛兆田)’s good friend after being assigned to the same squad. The two participated together in the remaining of the Chinese Civil War and Korean War, and then stationed together at Niechangshan (内长山) Fortification. In was only during this period when Zhu Fanyou (朱凡友) finally revealed to Ge Zhaotian (葛兆田) that the nationalist commander he killed was Zhang Lingfu (张灵甫). Although Zhang Lingfu (张灵甫)’s action well qualified him as a nationalist martyr, the nationalist regime honored its martyr in a different way by claiming that he committed suicide instead, as described in the eulogy titled “A summons to arms of Painfully mourning the (nationalist) 74th (Reorganized) Division” (痛悼74师檄文) wrote by Chiang Kai-shek, who claimed that over 20 nationalist commanders had committed suicide, while in reality, most of them were all killed in action on the frontline during the fierce fight against the enemy. Only the deputy commander of the Reorganized 74th Division, Major General Cai Renjie (蔡仁杰, 1902–1947), and the commander of the Reorganized 58th Brigade of the Reorganized 74th Division, Major General Lu Xing (卢醒, 1911–1947) committed suicide in the campaign.

The nationalist “Plan of a Decisive Campaign in Central Shandong” (Lu Zhong Jue Zhan Ji Hua, 鲁中决战计划) was in fact, a good battle strategy, as agreed even by their communist enemy, but the nationalist defeat meant that the nationalist original plan of annihilating their communist enemy in a decisive battle was impossible to reach, and the nationalist offensives against communist base in Shandong had encountered a serious setback. The effect not only affected the battlefield in Shandong, but also to a great degree, other battlefields as well, such as that of northern Shaanxi. Had the nationalist reinforcements succeeded in rescuing their besieged comrades-in-arms, they would have also succeeded in annihilating the enemy’s main force. In this campaign, the nationalist top commanders performed well in that they had correctly adjusted their strategies according to the changing situation on the battlefield, almost succeeding in achieve their strategic objective, but unfortunately, the field commanders were unable to carry out their mission to the fullest and thus resulting in failure.