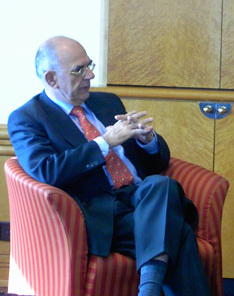 Johannes "Jan" Pieter Pronk (born , ) is a Dutch and . Between 1973 and 2002, he has served three terms as Minister of Development Cooperation and one term as Minister of Housing, Spatial Planning and the Environment in the Dutch parliament for the Labour Party (PvdA). From 2004 until 2006, he was the Special Representative of the Secretary-General and Head of Mission for the . Currently, he is a Professor of Theory and Practice of International Development at the in .

Jan Pronk continued to study at the (currently Erasmus University Rotterdam, Erasmus School of Economics) in , graduating in 1964. As a student, he worked as a guide on the "Henri Dunant", the Dutch 's holiday ship for the disabled. [ [http://www.europaworld.org/week186/janpronk16704.htm Jan Pronk: Special Representative for the world's conscience] . Retrieved on , .] He was a member of the Christian-Historical Youth Organisation, the youth organisation of the conservative Protestant party and president of the Protestant fraternity S.S.R..

In 1965 Pronk became research-assistant of professor , the future laureate, at the Centre for Development Planning and later he became associate professor at the Dutch Economic Institute. In this period he also became an active member of the social-democratic PvdA, between 1966 and 1971 he was chairman of the -branch of the party. He became active in the development cooperation-movement, serving as chairman of the "X-Y"-movement: an alternative Dutch development cooperation fund.

In 1971 Pronk was elected into the Lower house of the Dutch parliament for the Labour Party. He was for development cooperation in the leftwing shadow cabinet of PvdA, D66 and PPR. He served secretary of the committee Mansholt, a committee of these three parties on the implications of the -report for the Netherlands. He was re-elected in 1972. In 1973 he became Minister of Development Cooperation in the cabinet Den Uyl. He changed the development cooperation-policy of the Netherlands, giving it a political goal: the equal distribution of power and wealth in the world. The development cooperation policy became oriented towards the , in which developing countries would become self-reliant. In 1975 1,5% of the was spent on development aid. His proposal to include s as and as recipient countries of Dutch development aid, led to some controversy, but he put his proposal through. His policy supported liberation movement in . His leftwing policy put him at odds with the more moderate PvdA Minister of Foreign Affairs . As minister of Development Cooperation Pronk held several prominent positions in international organizations: between 1973 and 1977 he was Deputy Governor of the .

In 1977 he returned to Parliament. He combined this period in Parliament with several posts in the world of development cooperation: in 1979 he also became Professor of International Development at the ; he was a member of the committee "Church Participation in Development" of the and of the Councils Commission of Advisors on Economic Affairs; he was a member of the International Commission for the Study of Communication Problems of ; and in the Netherlands he was member of the Council for Government and Social Affairs of the Dutch Reformed Church. In 1978 he became Knight in the . In 1980 he left Parliament to become Assistant of the UNCTAD. In 1985 he was Assistant UN Secretary-General.

Pronk was re-elected to Parliament in 1986. In 1987 he was elected vice-chair of the PvdA, after first considering running for chair. In 1987 he was co-writer of the report "Moving Panels" in which the PvdA moderated its policies. In 1989 he combined his work as MP with a position as at the , where he occupied the "Joop den Uyl chair", created by the scientific foundation of the PvdA. Although he was originally asked to become Minister of Defense he returned to the post of development cooperation in the third cabinet Lubbers in 1989] . During his period as minister of development cooperation he sought to combine economic and social development, with environmental protection. As minister of Development Cooperation he again became deputy governor of the World Bank. In 1992 his criticism of n government's record on human rights, caused the Indonesian government to refuse development aid from the Netherlands ever since. In 1993 he was asked to become Deputy UN Secretary-General, but he refused. After the 1994 elections he remained Minister of Development Cooperation, now in the first cabinet Kok.

In 1998 he again became a minister in the second cabinet Kok but he switched to Minister of Housing, Spatial Planning and the Environment. During this period he focused on . In 2000 a fire works depot exploded in the neighbourhood of . As minister he was responsible for this event, although there was considerable controversy surrounding the disaster he did not step down. In 2000 he was the Dutch candidate for the post of , a post which was taken by another Dutchman, former prime minister . In 2000 and 2001 he chaired the UN climate conference, where parties agreed upon a compliance mechanism for the for the reduction of greenhouse gases. In 2002 when the report on the Dutch involvement in the was published, it became clear that the peacekeeping force had been unable to prevent the massacre. On , Pronk announced that he would step down as minister because he felt politically responsible. On , the entire Kok second Cabinet stepped down. In 2002 the Labour Party lost half its seats; Pronk was re-elected to Parliament, but he refused the position, because he wanted new faces to enter Parliament. In December 2002, he became Officer in the .

Since 2002 Pronk has held several positions in the .

In 2002 he came Special UN envoy to the World Summit on Sustainable Development in . He moderated discussions on water, hygiene, the environment and biodiversity. In 2003 he chaired the .

In 2003 he returned to the Institute of Social Studies as professor theory and practice of development cooperation. Pronk still holds several posts in Dutch . In 2004 he came into conflict with minister Verdonk (Migration & Integration), because he characterized the way she sent s out of the country as "".

On , , Pronk asked the warring parties in , including President and the seven rebel movements, to observe a "month of tranquility" during , which would begin , . His implicit call for a ceasefire in the western region of Sudan came after the government withdrew its ultimatum for peacekeepers to pull out. Other African states then agreed to extend their mandate until the end of 2006. By Pronk's request, they would finish the collision course, which would mean no fighting, no bombing, no changes of heart. Such a lull would help "create an atmosphere" for a new round of negotiations. The peace deal was "in a coma": not dead but dying. In addition the rejectionist factions should end the quarrel to start talking about everything related to the Darfur peace agreement to improve it. [cite web|url=http://www.guardian.co.uk/international/story/0,,1878251,00.html|title=UN envoy calls for peace in Darfur during Ramadan|author=Steele, Jonathan|date=|accessdate=2006-10-22|publisher=]

Pronk's story roughly parallels that of , a previous UN employee who was forced to leave Sudan after making critical comments about the Darfur conflict.

Jan Pronk was a candidate for the election of the of the Dutch Labour Party (PvdA). As a candidate he wanted the party to return to a more leftwing course. He lost the election, between September 16 and September 23, 2007, from . [ [http://www.nrc.nl/binnenland/article754946.ece Pronk: PvdA moet weer 'echt linkse' partij zijn] . Retrieved on August 20, 2007.]

During his political life, Pronk was known as principled politician. Prime Minister Kok called him the "Minister for the national ". [ [http://www.gcnl.nu/gastsprekers/gastspr_nat.htm profile as guest speaker] on www,gcnl.nu] Because he was minister for over 17 years, he came to be known as "minister by profession". As minister, he also got a less positive

Pronk is married to Tineke Zuurmond. They have two grown children, a daughter Carin and a son Rochus.