Over the Rainbow (Connie Talbot album)

Over the Rainbow (Connie Talbot album)

Over the Rainbow is Connie Talbot's debut album, released 26 November 2007 by Rainbow Recording Company. It received poor reviews from critics and peaked at #35 on the British charts. Despite this, additional copies of the album had to be pressed after sales were higher than expected. Most of the album's recording was done in a spare room in the house of Talbot's aunt, in an attempt to preserve her childhood by not interrupting her regular activities. Although initially public appearances were kept to a minimum, Talbot did make appearances to promote the album, and performed in public several times after the British release. She later toured Asia in support of the album. Over the Rainbow achieved more success on the Asian charts, reaching number one in Taiwan, South Korea and Hong Kong.

Over the Rainbow was rereleased on 18 June 2008 with an updated tracklist, replacing some of the Christmas themed tracks with more general covers. The first single from the album, "Three Little Birds," was released in June 2008, and a music video for the song was shot in Jamaica. On 14 October, the album was released in the U.S., appearing on several Billboard charts. Talbot visited the U.S. to promote the album, appearing on national television.

After briefly recording with Sony BMG, Talbot was signed to Rainbow Recording Company, an offshoot of Rhythm Riders made specifically for her.[1] To produce Over the Rainbow, Talbot worked with John Arnison, who currently manages Gabrielle and Billy Ocean, and Marc Marot, former managing director of Island Records.[1] It was produced and mixed by Simon Hill and Rob May.[2] A recording schedule was worked out so Talbot could continue with her normal school activities while recording the album in her aunt Vicky's spare bedroom, which her mother described as "a better solution [than Sony BMG] which has not robbed her of her childhood".[1] Talbot said that "it was just amazing that we could do it in my auntie's house".[3] Arnison and Marot asked the Talbot family to "write down a list of the songs that Connie would sing at her birthday party" to help choose the track listing, and then "thought long and hard" about including more adult songs on the album.[4] Talbot herself insisted that they should.[4] The final version of Over the Rainbow was recorded at Olympic Studios, on 12 October 2007.[5] Arnison described the recording process, saying that Talbot "hadn't sung nursery rhymes; she'd always sung classic tracks. So it was actually quite an easy task to make the record."[4] The album was released on 26 November 2007,[6] with an initial pressing of 50,000 copies.[7] However, an additional 120,000 had to be pressed after the album sold out in days.[7] The album was released in the U.S. on 14th October 2008.[8]

Over the Rainbow was rereleased on 18 June 2008,[9] and was available for preorder in May, with three new tracks to replace the Christmas-themed songs on the original album.[10][11] The new tracks were made available from Talbot's official website so that those who bought the original need not buy the rerelease.[10] Talbot's song "Three Little Birds", a cover of the Bob Marley song of the same name, was released as a single on 10 June 2008,[9][12] and a music video was shot in Jamaica to for the release.[13] The album was released in the U.S. on 14 October, and Talbot travelled to America with her family to publicise it.[14] Talbot's cover of "I Will Always Love You" was released as a single in the U.S. on 7 April, along with a newly recorded "You Raise Me Up".[15] 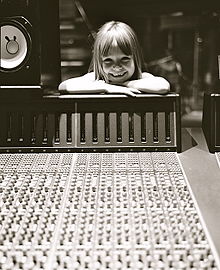 A publicity shot of Talbot taken during the recording of Over the Rainbow at Olympic Studios (12 October 2007).

Although Arnison claimed he did not "want to put [Talbot] through the promotional grind which most artists go through because she is too young",[1] Talbot made several public appearances after the album release. These included headlining the Great Bridge Christmas and Winter Festival, which local police threatened to cancel unless crowds clamouring to reach the tent in which Talbot was performing could be brought under control.[16] At the event, on 7 December 2007, Talbot was quoted as saying "I love it here, it’s brilliant, really fun" but she had to be ushered off-stage by the police.[16] Talbot performed publicly in Walsall's HMV store, and in Birmingham's Centenary Square.[17] TV appearances included GMTV and Channel 5 news, both on the day of the album's release.[17]

In April and May 2008, Talbot toured Asia to promote Over the Rainbow.[18] Asian press attributed her success to her videos on YouTube, with the Sun.Star mentioning that her most viewed video had been watched over 14 million times,[11] and The Straits Times saying that videos of Talbot's performances have been watched over 30 million times.[18] The tour made stops in South Korea, Taiwan, Hong Kong and Singapore, and Talbot and her family returned to England in late May.[19] News that Talbot was to release the album in the U.S. resulted in attention from American press sources including Fox Business Network and MarketWatch.[20][21] Kerri Mason, writing for Reuters, described Talbot's videos as "viral", and added that she had been watched on YouTube over 46 million times.[4] Talbot travelled to the U.S. for a promotional tour to coincide with the release, where she performed on The Ellen DeGeneres Show,[22] appeared as a guest on The Oprah Winfrey Show,[23] and appeared in Los Angeles, Philadelphia, New York City and Washington D.C..[22] Following the television appearances, sales of the album were boosted in the U.S..[24] Talbot again travelled to the U.S. to promote her single "I Will Always Love You" on 30 April 2009, and is due to return on the 2 May.[25] Appearances have included a performance on Good Day New York on Fox Broadcasting Company's WNYW.[26]

The album was received mostly negatively by critics. Sharon Mawer, of Allmusic, praised Over the Rainbow by saying "[Talbot] can sing, for a seven year old, and most of the notes (if not all of them) are in the right order and sung to the right pitch; the timing is fine too".[27] However, she criticised the album, saying "there's no feeling, no emotion, no realization of what each song is about; they're just pretty little songs", giving the album 2/5.[27] Nick Levine, of Digital Spy, said in a review of the album that Talbot had a "sweet, pure voice", but that there is "no nuance or depth to her performance".[28] However, he said that "There's something inherently wrong about awarding a star rating to a seven-year-old", and that "the decidedly adult concept of musical merit should have nothing to do with [her music]", rating the album 2/5.[28] Reviewers in the Harlow Star also commented on her age, saying "There's no doubt she's a sweet little girl with a nice voice, but surely there's something inherently wrong with thrusting a child into the limelight at such a young age?"[29] Rashvin Bedi, writing for Malaysian newspaper The Star, praised the album, saying that "Connie sings with ease and manages the high notes admirably", but asked whether "people would buy an album of the same songs sung by a 20-year-old girl".[30]

The album entered in the British album charts at 35 on December 8, 2007,[31] but was at the bottom of the charts by Christmas,[32] despite having been tipped as a potential Christmas number one.[1][33] It remained in the charts for five weeks, and peaked at 35.[31] However, the album was certified gold in Britain in early December,[16] with Talbot being presented a gold disc by Phillip Schofield on daytime television programme This Morning.[7] Following Talbot's tour of Asia, it was reported that the album had reached number one on the charts in Taiwan, South Korea and Hong Kong,[19][9] as well as reaching number three in Singapore.[19] The album has gone platinum in Taiwan and Hong Kong, and double platinum in Korea,[22] selling 30,000 copies.[34] In the U.S., the album appeared on three charts. It featured on the Top Heatseekers for nine weeks, peaking at number 7, on the Kid Albums for four weeks, peaking at number 8, and on Top Independent Albums for one week, at number 43.[35]