Brigandine
Not to be confused with Brigantine.
For the video game, see Brigandine (video game).

A brigandine is a form of body armour from the Middle Ages. It is a cloth garment, generally canvas or leather, lined with small oblong steel plates riveted to the fabric.

The form of the brigandine is essentially the same as the civilian doublet, though it is commonly sleeveless. However, depictions of brigandine armour with sleeves are known. Many brigandines appear to have had larger, somewhat 'L-shaped' plates over the lungs. The rivets, or nails, attaching the plates to the fabric are often decorated, being gilt or of latten and often embossed with a design.

Modern flak jackets and ballistic vests are based on the same principle: a protective cloth vest containing metal plates. 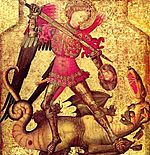 Saint Michael and the Dragon with sword & buckler, wearing brigandine with plate armour for hand and legs

Brigandines were essentially a refinement of the earlier coat of plates, which developed in the late 12th century and typically were of simpler construction and used larger plates. The Asian-originated armour reached Europe after the Mongol invasion in 1240 that destroyed the Kievan Rus' and generated extensive damage to the Kingdom of Hungary in 1241. The new armour became very popular first in Eastern Europe, especially in Hungary, towards the end of the 13th century and after having proved effective was adopted by the medieval states from West Europe several decades later.[1]

It was commonly worn over a gambeson and mail shirt and it was not long before this form of protection was commonly used by soldiers ranging in rank from archers to knights. It was most commonly used by Men-at-arms. These wore brigandine, along with plate arm and leg protection, as well as a helmet. However, even with the gambeson and the mail shirt, a wearer was not as protected as when wearing plate armor, which was typically much more expensive. The brigandine filled this gap very well.

Brigandine was simple enough in design for a soldier to make and repair his own armor without needing the high skill of an armorer.

A common myth is that brigandines were so-named because they were a popular choice of protection for bandits and outlaws.[3] This is untrue. Originally the term "brigand" referred to a foot soldier. A brigandine was simply a type of armour worn by a foot soldier. It had nothing to do with its alleged ability to be concealed by bandits. In fact, brigandines were highly fashionable and were ostentatiously displayed by wealthy aristocrats both in European and in Asian courts. 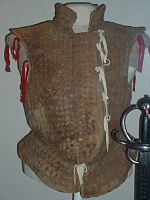 A similar type of armor was the jack of plates or coat of plates, commonly referred to simply as a "jack" (although this could also refer to any outer garment). This type of armor was used by common Medieval European soldiers and the rebel peasants known as Jacquerie.[4] 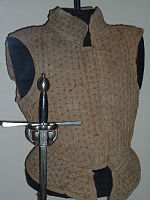 Like the brigandine, the jack was made of small iron plates between layers of felt and canvas. The main difference is in the method of construction: a brigandine is riveted whereas a jack is sewn. Jacks were often made from recycled pieces of older plate armor, including damaged brigandines and cuirasses cut into small squares.[5]

Jack remained in use as late as the 16th century and was often worn by Scottish Border Reivers. Although they were obsolete by the time of the English Civil War many were taken to the New World by the Pilgrim Fathers as they provided excellent protection from Indian arrows; one dating back to 1607 was recently found at Jamestown.[6] 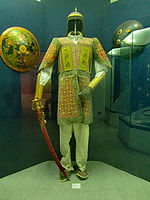 The Indian equivalent of the Brigandine was the Chihal'Ta Hazar Masha, or "Coat of ten thousand nails": a padded leather jacket covered in velvet and containing steel plates which was used until the early 19th century.[7] The skirt was split to the waist, allowing the soldier to ride a horse. Matching vambraces and boots containing metal plates were also used. It was derived from Islamic armor used by the Saracen armies. These were often elaborately decorated with gold lace, silk and satin and are highly-prized by European collectors.

Tipu Sultan wore armor of this type during his wars against the East India Company. The Turks used similar armor during the Russo-Turkish Wars.

Two complete suits of armor are preserved in the Hermitage Museum, Leningrad.[8] 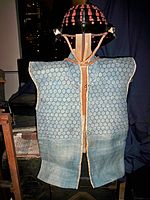 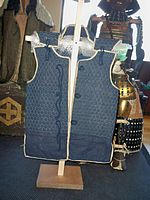 Kikko is the Japanese form of brigandine.[9] Kikko are hexagonal plates made from iron or hardened leather and sewn to cloth.[10] Kikko can be hidden by a layer of cloth over the kikko [11] or the kikko can be left exposed. Kikko were used only relatively recently, during the 16th Century.[10]

Kikko comes in many forms including, coats, vests, gloves, arm and thigh protectors and helmet neck guards. Kikko armor was worn as a stand alone defense or under other types of armor as additional protection.