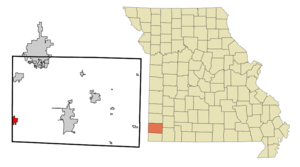 Several houses in the city were destroyed by a tornado on Saturday . [ [http://www.iht.com/articles/ap/2008/05/12/america/Severe-Weather-Optional.php Pollution may have indirectly saved lives in Okla. town] ; ; ; Retrieved ] broadcast their national weather report from the city on the following Monday morning.

There were 820 households out of which 35.1% had children under the age of 18 living with them, 54.6% were married couples living together, 13.0% had a female householder with no husband present, and 29.8% were non-families. 27.7% of all households were made up of individuals and 14.5% had someone living alone who was 65 years of age or older. The average household size was 2.49 and the average family size was 3.00.

Seneca is located in Lost Creek Valley 5 miles upstream from the Grand Land of the Cherokees and 5 miles downstream from the quaint Old Settler's town of Racine. The Frisco Railroad (now Burlington-Northern) runs through this valley. Prior to 1959, highway traffic to and from Oklahoma largely followed US 60 through Seneca rather than the more famous Route 66 with which it joins about 15 miles west of Seneca. At that time Seneca was a thriving and beautiful roadside stop. The Drive-In next to the Lost Creek bridge was a "must-stop" for kids who tired of being cooped up in the car.

Seneca is home to American Tripoli, producer of "Seneca Standard" grades of tripoli, a naturally occurring microcrystalline silica product which is used as an abrasive and metal polishing compound. Processing is done in Seneca, but much of the raw material is now mined in Oklahoma. Rock and mineral collectors can pick up samples of this "stone that floats" from alongside the railroad siding near the unloading area of the plant.

A famous landmark in Seneca is the giant can of Milnot (an evaporated milk product that substitutes vegetable oil for the butter-fat) located on the factory roof at the State Line. Before the Oklahoma toll-road to Joplin was opened in 1959, this landmark on US Route 60 meant "Welcome to Missouri". It has now been updated to the new label design, since J.M. Smucker took over ownership.

An exciting series of hills and dips on Route 43 south of Seneca has provided roller-coaster thrills to (perhaps recklessly speeding) automobile drivers for at least 70 years. This same road leads to a Missouri Department of Conservation access point on the beautiful Elk River, a dozen miles south of Seneca.