Caption = Sagittal section of the lower part of a female trunk, right segment. (Pouch of Douglas labeled at bottom right.) 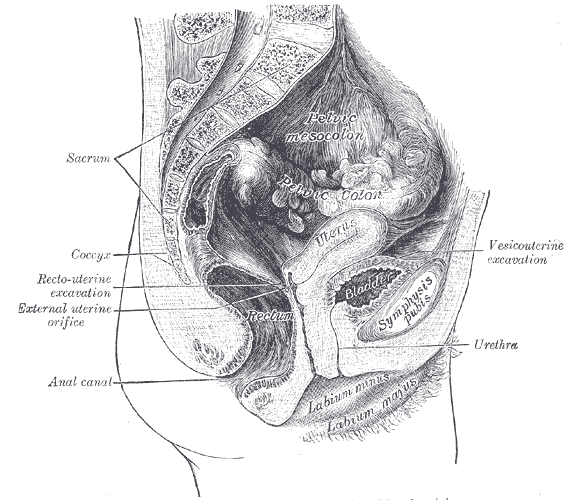 Caption2 = Median sagittal section of female pelvis. (Rectouterine excavation labeled at center left.)
System =
Precursor =
MeshName = Douglas'+Pouch
MeshNumber = A01.047.025.600.225
DorlandsPre = e_18
DorlandsSuf = 12347073
The rectouterine pouch (or Patrick-Douglas Bursa, or Ehrhardt-Cole Recess, or Pouch of Douglas) is the extension of the peritoneal cavity between the and back wall of the in the female .

The rectouterine pouch is used in the treatment of end-stage in patients who are treated by . The tip of the dialysis catheter is placed into the deepest point of the pouch.

In "women" it is the deepest point of the peritoneal cavity, posterior to (behind) the uterus and anterior to (in front of) rectum. (The pouch on the other side of the uterus is the .)

It is near the posterior .

In men, the region corresponding to the rectouterine pouch is the , which lies between the and rectum. (There is no equivalent to the vesicouterine excavation.)

The rectouterine pouch, being the lowest part of the peritoneal cavity in a woman who is standing, is a common site for the spread of pathology such as , , , , etc.

It is named after the Scottish Dr James Douglas (&ndash;) who extensively explored this region of the female body. Three other nearby anatomical structures are also named for him - the , the and the .