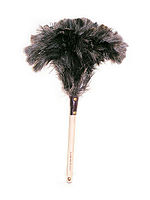 A feather duster is an implement used for cleaning. It consists typically of a wooden-dowel handle and feathers from either the male or female ostrich bird that are wound onto the handle by a wrapped wire. Dusters vary in size by are most often between 14" and 32" in total length. Some dusters have a retractable casing instead of a dowel handle. These dusters are typically used by rack-jobbers and truck drivers who need to dust store shelves, and like to retract the feathers into the handle to avoid damage.

Feather dusters are effective in dusting tight areas, or areas where there are a lot of odds and ends to dust around. The individual feathers are able to penetrate through the knick-knacks and pull the dust out of the area without disturbing items. On large open surfaces or walls, or in trying to get spider webs in the ceiling, either a feather duster or other dusters like lambswool or synthetic dusters will work.

In 1870, the original idea for the feather duster was conceived in a broom factory in Jones County, Iowa, USA. A farmer brought a bundle of turkey feathers into the factory asking if they could be used to assemble a brush. E.E. Hoag used these feathers to invent the first feather duster. Using a short broom stick and splitting the feathers with a pocket knife, the duster was found to be too stiff for use. In 1874, the Hoag Duster Company was founded, which became a pioneer of feather dusters in the U.S. state of Iowa.[1]

In 1874, Susan Hibbard of Geneva Lake, Wisconsin, USA used discarded turkey feathers to invent a feather duster.[2][3] Hibbard filed a patent (U.S. patent #177,939) on November 13, 1874 which was issued on May 30, 1876.[4] After a hard fought legal battle against her husband, George Hibbard, and the National Feather Duster Company in December 1881, the United States Court of Appeals for the Seventh Circuit in Chicago ruled in favor of Hibbard giving her priority of invention of the feather duster.[5]

The first ostrich feather duster company in the United States was formed in 1913 by Harry S. Beckner and his brother George Beckner in Athol, Massachusetts and has survived till this day as the Beckner Feather Duster Company under the care of George Beckner's great granddaughter, Margret Fish Rempher. Today the largest manufacturer of Ostrich Feather Dusters is Klein Karoo International (Feathers) which is located in Oudtshoorn, South Africa.

The feather duster was considered a status symbol in the late 19th and early 20th centuries.[citation needed] 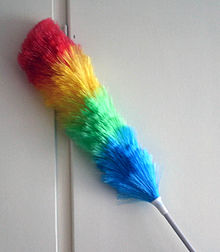 There are several types of feathers used in feather dusters, but ostrich feathers are most often used. Feathers for dusters are the ostrich families most valuable industrial commodity.

These feathers come from the male ostrich and are very soft with feathers that are more "stringy" in nature, resulting in a premium duster.

These feathers are more stark than the black feathers and are often sold at grocery stores.

These feathers are more pointed and stark than ostrich feathers, are usually sold at very low prices, and are inferior in quality.