"Coffee & TV" is a song by the British alternative rock band Blur. The verses are sung by the band's guitarist, Graham Coxon, who also wrote the lyrics. The music is credited to Damon Albarn, who also sings the chorus. The song appears on the band's sixth studio album, 13, released in 1999; and was also released as the second single from the album in the same year. Despite reaching only #11 in the UK singles chart, the song became one of Blur's most popular radio hits. Blur manager Chris Morrison believed that it was deprived of a top 10 place after it was confirmed that some sales figures were not recorded.[1] Its musical style is an anomaly in comparison with the rest of 13, and is similar to Blur's earlier, Britpop days, despite featuring heavy guitar distortion and feedback during the instrumental break, major characteristics of 13.

The single edit of the song also appeared on Blur's Best Of compilation, released in 2000. In addition, it was featured on the Cruel Intentions soundtrack.

The edit of the singles cuts off the instrumental part after the fade out and runs about 40 seconds shorter than the album version. This instrumental part is a hidden track, which, though officially untitled, is known as "Coffee & TV Exitlude".

The music video for Coffee & TV was directed by Hammer & Tongs. It first aired in June 1999 and features an anthropomorphic dancing milk carton character named Milky, made by Jim Henson's Creature Shop.[citation needed] Milky the milk carton, as used in the video, was sold at an auction in 1999.[2] 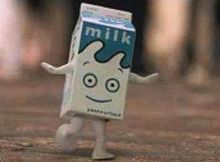 The video tells the story of an animated milk carton as he goes in search of Blur guitarist Graham Coxon, who has apparently run away from home. Milk cartons are sometimes used (specially in the US) to help seek missing persons, and Coxon's (fictional) family have had his face and a plea printed on cartons. This one, Milky, sees how upset they are at breakfast and decides to resolve the situation himself. He faces many hazards on his journey, including a near-miss with a garden strimmer and, later, violent pop bottles in an alley full of litter. Milky gets a break when he is given a ride from a motorcyclist, though. He is dropped off downtown and asks around for Coxon, but comes up empty. He then goes to lady of the night 'Big Suzy' for answers, but is scared away when she attempts to pounce on him. He falls in love with a female strawberry milk carton, but she is tragically crushed to death by a passer-by's foot. Milky continues his search down the back alleys and, looking through a window, is overjoyed to find Coxon playing Coffee & TV with Blur. The window falls into the room, together with Milky. Coxon discovers him, sees his family's printed plea and makes a decision to slip away from his bandmates (only Damon seems to notice), who play on as he takes the bus back home to his family. Once off the bus, Coxon opens and drinks the carton – in essence, killing Milky – and drops him into a dustbin before going in for a touching family reunion. A weak but happy Milky witnesses this before he dies… but then emerges from the bin on angel's wings to the song's instrumental coda, waving goodbye as he ascends to heaven, reunited en route with his love, the strawberry milk carton.

The video won several awards in 1999 and 2000 including Best Video at the NME Awards and the MTV Europe Awards. In 2005, it was voted the 17th greatest pop video of all time in a poll by Channel 4.[3] In 2006, Stylus Magazine ranked it #32 in their list of the Top 100 Music Videos Of All Time. In a similar poll, NME ranked it the 20th greatest music video of all time.

The song can briefly be heard in the 1999 film Cruel Intentions.

A part from the music video can be seen in episode 12, season 3 of The Sopranos.