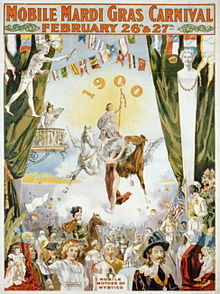 A mystic society is a Carnival social organization, similar to a krewe in New Orleans, that presents parades and/or balls for the enjoyment of its members, guests, and the public.[1] The term came to be used in this context in Mobile, Alabama.[1] Mystic society membership is secret. The societies have been based in class, economic and racial groups.[1] Mobile's parading mystic societies build colorful Carnival floats and create costumes around each year's themes.

Mystic societies in Mobile give formal masquerade balls, known as bal masqués, which are almost always invitation only and are oriented to adults.[1] Attendance at a ball requires that a strict dress code be followed that usually involves full-length evening gowns and white tie with tails for invited guests, and masked costumes for society members.[1] The bal masqués feature dramatic entertainment, music, dancing, food, and drinks.[1] Bal masqués are normally based on a theme which is carried out through scenery, decorations, and costumes. Some society balls also include a tableau vivant.[1] Much of the memorabilia from these occasions can be viewed at the Mobile Carnival Museum.

Knights of Revelry parade in 2010.

Mobile first celebrated Carnival in 1703 when French settlers began the festivities at the Old Mobile Site.[3] Mobile's first informal Carnival society was organized in 1711 with the Boeuf Gras Society (Fatted Ox Society).[4] Since that time mystic societies have evolved into much more complex organizations and membership has been formed by various social groups, originally based in class and related alignments. Groups have been formed by co-workers, bachelors, women, African Americans, Jews, married women, married couples, gays and lesbians, or open membership, including visitors.[4] [5]

Mobile's Cowbellion de Rakin Society was the first formally organized and masked mystic society in the United States to celebrate with a parade in 1830.[3][6] The Cowbellions got their start when a cotton factor from Pennsylvania, Michael Krafft began a parade with rakes, hoes, and cowbells.[6] The Cowbellions introduced horse-drawn floats to the parades in 1840 with a parade entitled, “Heathen Gods and Goddesses.[4] The Striker's Independent Society was formed in 1842 and is the oldest surviving mystic society in the United States.[4] The idea of mystic societies was exported to New Orleans in 1856 when six businessmen, three who were formerly of Mobile, gathered at a club room in New Orlean's French Quarter to organize a secret society, inspired by the Cowbellion de Rakin Society, that would observe Mardi Gras with a formal parade. They founded New Orleans' first and oldest krewe, the Mistick Krewe of Comus.[7] Carnival celebrations in Mobile were cancelled during the American Civil War.

Order of Myths members and parade attendants in 2010.

Mardi Gras parades were revived in Mobile after the Civil War by Joe Cain in 1867, when he paraded through the city streets on Fat Tuesday while costumed as a fictional Chickasaw chief named Slacabamorinico. He irreverently celebrated the day in front of occupation Union Army troops.[8] The Order of Myths, Mobile's oldest mystic society which continues to parade, was founded in 1867 and held its first parade on Mardi Gras night in 1868.[4] The Infant Mystics also begin to parade on Mardi Gras night in 1868, but later moved its parade to Lundi Gras (Fat Monday).[4]

The Mobile Carnival Association (MCA) was formed in 1871 to coordinate the events of Mardi Gras; this year also saw the first Royal Court held with the first king of Carnival, Emperor Felix I.[4] The Comic Cowboys of Wragg Swamp were established in 1884, along with their mission of satire and free expression.[4] The Continental Mystic Crew mystic society was founded in 1890, it was Mobile's first Jewish mystic society.[3] The Order of Doves mystic society was founded in 1894 and held its first Mardi Gras ball. It was the first organized African-American mystic society in Mobile.[3] The first mystic of women was the M.W.M who held its first and likely only ball in 1890 and the first women's society to parade in the streets of Mobile was the Order of Polka Dots who rolled in 1950 just one night before its friendly rivals, the Maids of Mirth (MOMs).

The Infant Mystics, the second oldest society that continues to parade, introduced the first electric floats to Mobile in 1929.[4] The Colored Carnival Association was founded and had its first parade of societies in 1939; it was later named the Mobile Area Mardi Gras Association (MAMGA).[3] The Mobile Colored Carnival Association (now called the Mobile Area Mardi Gras Association or MAMGA) installed the first African-American Mardi Gras court in 1940 with the coronation of King Elexis I and his queen. It coordinates events of African-American mystic societies.[9]

Founded in 1961, Le Krewe De Bienville (LKDB) exists as Mobile's only civic and charitable organization with a mission statement to promote Mobile and its Mardi Gras. Following the lead of the little known Krewe of Pan and Apostles of Apollo, societies comprising members of the city's gay and lesbian community, the Order of Osiris held its first ball in 1980. It is now one of the Carnival season's most anticipated balls and sought-after invitation.[4]

The Mobile International Carnival Ball was first held in 1995, with every known Mobile mystic society in attendance.[4] The Order of Outowners mystic society was founded in 2001 with the mission of being a more modern and inclusive society than the traditional ones, and offers ball tickets for sale to the general public.[3] The Conde Explorers were founded as a parading mystic society in 2004, with the express mission of being open to all races and both genders. The Conde Explorers were one of several mystic societies featured in the 2008 documentary film, The Order of Myths. It reveals Mobile's Carnival preparations and celebrations, the beauties and joys, as well as the complex racial history of the city and its mystic societies.

Past and present societies