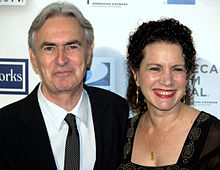 Steinberg and Susie Essman at the 2009 Tribeca Film Festival premiere of Woody Allen's film Whatever Works.

David Steinberg (born August 9, 1942) is a Canadian comedian, actor, writer, director, and author. At the height of his popularity, during the late 1960s and early 1970s, he was one of the best-known stand-up comics in the United States. He appeared on Johnny Carson's Tonight Show more than 130 times (second only to Bob Hope in number of appearances) and served as guest host 12 times, the youngest person ever to guest-host.[1] Steinberg directed several films and episodes of many of the most successful television situation comedies of the last twenty years, including Seinfeld, Friends, Mad About You, Curb Your Enthusiasm, and more than 35 episodes of Designing Women.

Born the son of Yasha, a strict, Romanian-born rabbi, and Ruth Steinberg in Winnipeg, Manitoba, Canada, David initially studied theology in Israel.[1][2] Later, while studying English Literature at the University of Chicago, he decided to become a comedian after seeing Lenny Bruce perform.[1] He finished school and was discovered by one of the founders of The Second City in Chicago, which he joined in 1964. There he performed with the likes of Robert Klein, Fred Willard, Peter Boyle, and Joe Flaherty. He remained with the group for six years.[1]

In 1972, Steinberg was best man at the wedding of his friend, the gangster Crazy Joe Gallo.

One of Steinberg's most notorious performances was in October 1968 on The Smothers Brothers Comedy Hour, where he gave satirical sermons. The sketch caused CBS to receive a record number of complaints, and, as a result, the network instituted a policy of providing local stations with a closed-circuit telecast of each episode ahead of time so they could choose whether or not to air it.[3] The Smothers Brothers were told by the network that they could have Steinberg on the show again on the condition that he would not repeat the sermons.[4] Nevertheless, Tommy Smothers asked Steinberg to do it again, and he gave a sermon in which he said "The Old Testament scholars say that Jonah was swallowed by a whale. The Gentiles, the New Testament scholars say, 'Hold it, Jews, no.' They literally grabbed the Jews by the Old Testament." This incident contributed to the cancellation of the show. The Jonah sketch never aired.[5]

Steinberg was the most frequent host of the pop and rock music ABC television show, The Music Scene, 1969-1970. In 1972, Steinberg wrote and starred in The David Steinberg Show in the United States.[6] In a review, TV Guide labelled him "offbeat, racy, outrageous, and establishment-baiting – all of which makes him a particular favorite among the young and disenchanted."[1] Nearly identical in format to Garry Shandling's later effort, The Larry Sanders Show, the series went behind-the-scenes of a fictional TV talk show.[6] A new version of the show was produced in Canada in 1976 and featured Joe Flaherty, John Candy, Dave Thomas, Andrea Martin, and Martin Short.[1]

Steinberg performed some notable stand-up comedy during the 1970s as well, including "The Incredible Shrinking God" (LP MCA 73013, 1968), which contains ten of his comedic sermons and mini-sermons recorded live during his stand-up routine at Second City. He was inducted into Canada's Walk of Fame in 2003.[7]

In 2010, he directed and produced the Canadian cable comedy series Living in Your Car.[10]

Steinberg has been married twice. He married his first wife Judy in 1973 and after twenty-four years of being married they divorced in 1997.[11] Steinberg then married his second wife Robyn[12] and they have two daughters.

Steinberg has received five Emmy Award nominations, winning two as one of the writers of Academy Awards programs in 1991 and 1992. He received a CableACE Award in 1992 for his stand up comedy Cats, Cops and Stuff. He has been nominated for the Directors Guild of America Award (for Outstanding Directing – Comedy Series) twice: first in 1991 for the Seinfeld episode, The Tape, and again in 1996 for the Mad About You episode, The Finale: Parts II and III, and has been nominated for a Canadian Comedy Award (2000) and a Gemini (2001), as well.[13] His parody of the novel Ragtime won him a Playboy Humor Award.[1]