Diamond Valley Lake is a man-made offstream reservoir located near Hemet, California, United States. It is one of the largest reservoirs in Southern California and also one of the newest. With 800,000 acre feet (990,000,000 m3) of water, The lake nearly doubled the area’s surface water storage capacity and provides additional water supplies for drought, peak summer, and emergency needs.[1]

The Metropolitan Water District of Southern California began the $1.9 billion construction project in 1995. Filling of the lake, by way of the Colorado River Aqueduct began in 1999 and was completed in 2003.[2] The lake is currently served and filled by the Inland Feeder.

The lake features three earth fill dams; two on either side of the valley and one on the south rim. Construction of the dams took advantage of nearby materials, and was one of the largest earthworks projects in the United States. Excavation of core materials for the dams resulted in many paleontological finds, all of which are displayed at the Western Science Center at the lake's East end. The lake is open to boating and fishing, along with hiking and other recreational activities around the lake.

Diamond Valley Lake is located within the Domenigoni/Diamond valleys, 4 miles (6.4 km) southwest of the city of Hemet. The site was chosen because of its location between the cities of San Diego and Los Angeles, and because of the raw materials located on-site for the construction of the three dams. The location was also chosen because of its vicinity, about 5 miles (8.0 km), to the existing Colorado River Aqueduct that is used to supply the lake with water.[3] 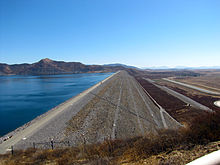 Construction of the three dams was completed in 1999, requiring the excavation of 31,000,000 cubic metres (41,000,000 cu yd) of foundation material. The earth fill dam project required about 110,000,000 cubic yards (84,000,000 m3) of sand, clay and rock. Much of the materials needed were obtained from the project area. Core materials were obtained from the silty and clayey sandy alluvium in the floor of the reservoir and the rock fill came from the bedrock highlands of the reservoir's south rim. Design and construction of the dams also took into consideration the threat of earthquakes with the San Jacinto Fault located about 6 miles (9.7 km) from the reservoir and the San Andreas fault located about 19 miles (31 km) from the reservoir.[3]

The west dam rises to 285 feet (87 m) above the valley floor. It spans 1.5 miles (2.4 km) over a nearly flat alluvial valley floor between bedrock abutment ridges.[3] About 65% of the dam's foundation area is founded on quartzite and phyllite bedrock; the remainder is founded on dense alluvium that fills three buried channels, which are up to 120 feet (37 m) deep. The foundation excavations were extended 90 feet (27 m) below the original ground surface to remove liquefaction soils that would have made the dam unstable in an earthquake. To minimize foundation seepage through the alluvium, 3 feet (0.91 m) thick cut-off walls of plastic concrete were constructed across the three alluvial channels and excavated at least 2 feet (0.61 m) into bedrock. To reduce seepage through the rock foundation, the entire core width was consolidation grouted and a double-line grout curtain was installed to a depth of approximately 125 feet (38 m). Grouting of the west dam took about two years to complete and required 189 miles (304 km) of grout holes.[3] 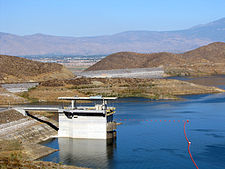 The Saddle dam and I/O tower at Diamond Valley Lake

The forebay and pumping station

Because of the amount of material use in the construction of the east dam, some of the biggest trucks in the world had to be brought to the site. Twelve Caterpillar 789 dump truck's were used in construction of the East Dam. The trucks, costing $1.4 million each, weighed up to 350 tons when full of rock, and use a 1,800 horsepower (1,300 kW) engine that burns 40 US gallons (150 L) of fuel per hour. They were so big that they had to be brought to the reservoir site in pieces and assembled on site.[6]

The Saddle Dam rises 130 feet (40 m) above the lowest point in the ridgeline of the north rim and is around 0.5 miles (0.80 km) long. The dam was built to increase the storage capacity of the lake, which would have been limited due to the lower ridge in this area. It is founded completely on phyllite and schist bedrock. To minimise foundation seepage, a two-line grout curtain extends up to 100 feet (30 m) below the foundation.[3]

Filling of the lake began in 1999 with water provided by the Colorado River Aqueduct and San Diego Canal. Water would first enter the fore-bay, a 35-acre (140,000 m2) 163-million-US-gallon (620,000 m3) basin that held the water before being pumped through the pumping station. The pumping station, named after one of the founders of the MWD, Hiram W. Wadsworth,[5] features twelve 6,000 horsepower (4,500 kW) pumps for moving water from the forebay to the intake-outlet (I/O) tower.[7] In 2001, four of the twelve pumps were converted to hydroelectric turbine generators capable of producing 3 megawatts of power each. If all the pumps were converted, the entire facility could produce up to 40 megawatts of power.[8]

In 2009, the lake began being filled with water provided by the Inland Feeder after nearly two years without a source. The water replenished much of what was lost after drought conditions required the MWD to tap into the lake. Water from the Colorado River Aqueduct is not being used due to the threat of the Quagga mussel, an invasive species that has already contaminated other Southern California lakes served by the aqueduct.[10]

A Paramylodon harlani on display at the Western Science Center

During excavation, bones and skeletons were found from extinct mastodons, mammoth, camel, sloth, dire wolf and long-horned bison. Paleontologists from the San Bernardino County Museum in Redlands, California uncovered thousands of fossils in the Diamond and Domenigoni valleys that will add immensely to the store of public knowledge about the region. Collectively, these animal fossils are named the Diamond Valley Lake Local Fauna.[11]

The paleontological finds of mammoth, mastodon, bison, and other Pleistocene Epoch species from Diamond Valley Lake provide a unique snapshot on inland southern California during the Ice Ages, and bridge a massive data gap between fossil deposits at La Brea tar pits in Los Angeles, California and Ice Age sites in the Mojave Desert. Unofficially, the Diamond Valley Lake area is often referred to as the "Valley of the Mastodons". Fossils from the Diamond Valley Lake site comprise a classic late Pleistocene assemblage which includes the following extinct animals:[11]

Many fossils of rabbits, rodents and pond turtles, as well as coyotes, deer and the Black bear, have been recovered as well. One of the most common animals identified from the Diamond Valley Lake site by San Bernardino County Museum scientists was the extinct American mastodon, Mammut americanum.[11][12] In North American paleontology, mastodons are thought to have been solitary forest-dwelling browsers. The abundance of mastodons in the fossil record from the site suggests that, during the last Ice Age, the Diamond Valley Lake site was more wooded or forested than today. Fossil remains of ponderosa pine and manzanita recovered from the site lend credence to this interpretation.[12] Radiometric dating of fossil plants from the Diamond Valley Lake site confirms an age range of less than 13,000 years ago to more than 60,000 years ago for these fossils.[12]

Diamond Valley Lake offers fishing and light boating on the lake. A recreation park, aquatic center, visitor center and the Western Science Center along with the lake marina are located on the eastern end of the lake. A viewpoint, offering views of the pumping station and I/O tower, along with most of the lake is located on the western end of the lake. To the south of the lake is the Southwestern Riverside County Multi-Species Reserve, a 13,500 acres (55 km2; 21.1 sq mi) preserve between Diamond Valley Lake and Lake Skinner. The reserve is home to at least 16 sensitive, endangered or threatened native California bird, animal and plant species.[13]

Stocking of the lake with fish began before reservoir was filled with a small rearing pond being placed on the bottom of the valley. The lake has several species of freshwater Fish; Largemouth Bass, Smallmouth Bass, Bluegill, Crappie, Rainbow Trout, Striped Bass, Channel Catfish, and Shad. It is considered one of the best fisheries in California.[14]

The East Dam and recreation park of Diamond Valley Lake. The aquatic center and Western Science Center can be seen at the far right.

Much of the area around the lake remains undeveloped and empty. Original plans included large recreation areas on both the eastern and western end of the lake complete with golf courses, camping grounds, swimming lakes, water parks and other amenities. The MWD still plans on building the additional recreation facilities, but lack of funding and lack of support from developers has prevented them from doing so.[15]