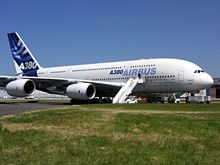 Many early flying boat airliners, such as the Boeing 314 Clipper and Short Sandringham, had two decks. Following World War II the Stratocruiser, a partially double-decked derivative of the B-29 Superfortress, became popular with airlines around the world.

The first double-deck jet airliner was the widebody Boeing 747, with the top deck smaller than the main level. Boeing originally designed the distinctive 747 bubble top for defense and commercial air cargo. The small top deck permitted the cockpit and a few passengers and nose doors with unobstructed access to the full length of the hold. Most 747s are passenger jets, and a small percentage are cargo jets with nose doors.

The new widebody Airbus A380 has two passenger decks extending the full length of the fuselage, as well as a full-length lower third deck for cargo. Singapore Airlines took delivery of the first A380-800 in a ceremony in Toulouse, France. SIA had fitted them with 12 private luxury suites and two double beds.[1] 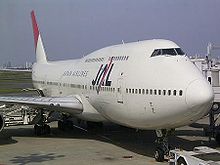 A JAL 747 with trademark "hump" formed by upper deck