For other meanings, including oxy-gas torches, see Blowtorch (disambiguation). 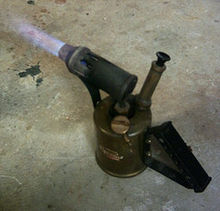 A blowtorch (US), blow torch (US), or blowlamp (UK) is a tool for applying lower-intensity and more diffuse flame and heat for various applications, than the oxyacetylene torch. Before aerosol cans and pressurized gas cylinders, fuel was pressurized by a syringe or pump. Present-day pressurized gas containers in a huge variety of forms have negated the need for the integral and often dangerous pump.

A blowtorch by UK word usage is a type of oxy-gas torch.

Technically, a "blowtorch" (by USA word usage) must burn a liquid fuel using a vaporizer.[citation needed]

The first known blowlamp patent is from France and is dated January 7, 1791.

Another early blow pipe patent comes from USA and is dated May 13, 1856.

In 1882, a new vaporizing technique was developed by C. R. Nyberg in Sweden and the year after, the production of the Nyberg blow lamp started. It was quickly copied or licensed by many other manufacturers.

The US blowlamp was independently developed with a distinctive flared base and was fueled by gasoline, whereas the European versions used kerosene for safety and lower cost.

After the Korean War in the 1950s, propane caused many changes in the blowlamp industry worldwide and by the 1970s most manufacturers of the old type of blowlamp, using gasoline or kerosene as fuel, had disappeared. There remain several manufacturers producing brass blow lamps in India, China and North Korea for markets where propane gas is difficult to obtain or too expensive to be viable.

The blowtorch is commonly used where a diffuse (wide spread) high temperature naked flame heat is required but not so hot as to cause combustion or welding temperature applications: soldering, brazing, softening paint for removal, melting roof tar, or pre-heating large castings before welding such as for repairing. It is also common for use in weed control by controlled burn methods, melting snow and ice from pavements and driveways in cold climate areas, especially the USA and Canada road repair crews may use a blowtorch to heat asphalt or bitumen for repairing cracks in preventative maintenance. It is also used in cooking.[1]

The blowtorch is referred to in industry and trade as per the fuel consumed by the tool:

In both sorts the fuel tank often is small and serves also as the handle, and usually is refuelled by changing the fuel tank with the liquified gas in it.

The forms with gaseous fuel are sometimes fed from a liquid petroleum gas cylinder via a hose: example at this link.

A flame gun is a large type of blowlamp with built-in fuel tank, used for various purposes: weed control by controlled burn methods, melting snow and ice off walk and driveways in the winter, starting a fire, etc. It is commonly confused in word usage with a flamethrower.