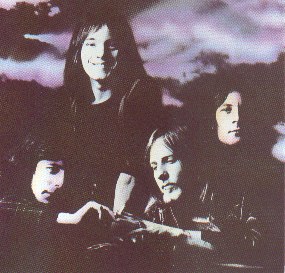 Humble Pie were a rock, band from England and were one of the first supergroups of the .

The original band line-up featured (former , and of ), (former lead singer and guitarist of The Herd), (former bass guitarist of ) and seventeen-year-old .

Although successful in America, as a band, they remained much loved in Britain. They are best remembered for their dynamic live concert performances in the early 1970s and songs such as "" and "".

In late 1968, Frampton was eager to escape The Herd, as well as his teeny-bopper image. The young guitar prodigy played on a Small Faces recording session in France that year and had become close friends with Marriott, who himself was becoming frustrated with creative restrictions. The Small Faces' frontman suggested a drummer for Frampton — Shirley, whom he'd known for several years, most notably through his work with the mod band Apostolic Intervention.

Nothing really came of the project, though, until New Year's Eve 1968. Marriott walked offstage during a disastrous Small Faces gig, rang Frampton at his home later that night and asked if he and Ridley could join his new band. Humble Pie was born.

Because the members had all previously played in high-profile groups, many viewed Humble Pie as a "supergroup," although the band loathed the term and the expectations that came with it. They started secretly rehearsing at Marriott's home in Moreton, (Beehive Cottage), in early 1969. The objective was to hone the act away from media and public scrutiny. After signing with 's , the band had planned to launch its first single and album in the spring, but were delayed after an injunction was filed by The Herd's management.

Eventually, Humble Pie released their debut single, "", in July 1969. It was a No. 4 hit in the , and was quickly followed by the album "", which peaked at No. 16 on the UK album charts. In the 2006 documentary "Heavy: The Story of Metal", "As Safe As Yesterday Is" was recalled as the first album to have been described by the term "heavy metal".Heavy metal music was first heard on steppenwolf's "born to be wild".. The mention occurred in a magazine review written by journalist .

Their second album, "Town and Country", was hastily released in the UK in November 1969 while the band was away on its first US tour. A collective effort that featured a more acoustic sound and songs written by all four members, it did not sell as well as "As Safe As Yesterday Is," and financially-strapped Immediate sank deeper into debt.

Recent tape archives show the band recorded around 30 songs in its first nine months of existence, many of which remained unreleased for decades — including a cover of ' classic "Drown In My Own Tears." Humble Pie concerts at this time featured an acoustic set — with a radical re-working of Graham Gouldman's "For Your Love" as its centerpiece — followed by an electric set.

The winter of 1970 saw the collapse of Immediate, a switch to , and a change in band . Humble Pie now focused on the market. American , the band's new manager, had the band scrap its 'unplugged' set and crank the volume up. He also pushed Marriott to take more of the on-stage spotlight, something Marriott had, up until then, been sharing with Frampton and Ridley.

While these moves would improve the band's commercial standing in the States, they were blows to Frampton, who had been building up confidence and material as a songwriter.

The group's first album for A&M, "Humble Pie", released later that year, was heavier than the previous two, alternating between and excess. An attendant single, the funky, Stax-flavored "," failed to chart, but Anthony's strategy was starting to work. The band became known for putting on one of the most popular live rock shows in the

Humble Pie released its most successful record to date, "Rock On", in early 1971. A concert supporting that record at the was captured on "" in 1971. The live album reached number 21 on the U.S. , and both "Rock On" and "Performance" were certified gold by the . The loud-quiet-loud epic "" was an FM radio hit in the (peaking at No. 73 on the ), propelling the album up the charts.

Frampton left the band by the time the album was released and went on to enjoy massive popularity as a solo artist.

With Dave "Clem" Clempson replacing Frampton, Humble Pie moved towards an even harder sound emphasizing Marriott's blues and soul roots. Their first record with Clempson was "Smokin'" (1972), which featured minor hits in the songs "" (No. 52 Hot 100) and "." It was the band's most commercially successful record and reached No. 6 on the US charts, helped by a busy touring schedule. After the success of Smokin', the band's record label, A&M, released Humble Pie's first two Immediate albums in one album, as Lost and Found. The marketing ploy was a success, and the album charted at No. 37 on the .

Looking for a more authentic R&B sound, Marriott hired three female backing singers, "The Blackberries." The trio consisted of , and (who was later replaced by ). They had performed with Tina Turner as the and with as The Raelettes. [Humble Pie.net "in-depth article on the Blackberries career" [http://humble-pie.net/the_blackberries/html/the_blackberries2.html] ] While the direction confused some of the Pie's hard-rock audience, it was a gambit that, like their 1969 acoustic sets, would prove popular with other rock bands many years down the road.

This newly augmented lineup(which also would include, briefly, on sax) would record "Eat It", a double album released in 1973. Side 1 was made up of Marriott originals; Side 2 consisted of classic R&B covers; Side 3 was a collection of acoustic Marriott songs; and Side 4 featured Humble Pie live in concert at . While it just missed charting in the U.S. top 10 (it peaked at No. 13), the record did little to expand the group's audience. Instead of showcasing the band's range, it signaled the beginning of the end.

After the leaner, more focused "" (1974), and "" (1975) — a patchwork of studio recordings that were, by and large, intended for a Marriott solo album — the group found themselves running out of steam creatively and bickering internally. Humble Pie, joined by keyboardist , staged the "Goodbye Pie Tour" in 1975 and broke up.

In 1979, revived Humble Pie with , adding Bob Tench (from Jeff Beck Group) on guitar and Anthony "Sooty" Jones on bass. The band released two albums, "On to Victory" in 1980 and ""in 1981, but the effort soon fell apart during a 1981 tour when Marriott developed a forcing the rest of the tour's cancellation.

In 1991, Marriott and began collaborating again, with another Humble Pie rebirth possibly in the offing, but on Saturday, ["Marriott died April 20 1991" http://www.bbc.co.uk/dna/h2g2/A9370415 Retrieved 22/09/07] , a house fire took Marriott's life before anything could materialise. [steve marriott all too beautiful p.287-288] Two recorded songs from this collaboration, "The Bigger They Come" and "I Won't Let You Down", with Steve Marriott on vocals, appear on Peter Frampton's album "Shine On: A Collection".

Before the collaboration between Frampton and Marriott, drummer Shirley reformed the group with a different assortment of musicians. This project was called Humble Pie Featuring Jerry Shirley, as he was now the group's leader and the only original performing member. He had contacted his former bandmates about reuniting, but Marriott had been disappointed with earlier reunions and refused to be a part of any such effort. The band began performing live in 1989 and were featured at the " 20th Anniversary Celebration", which was broadcast live on television in the and several other countries.

The group was based in , for most of its approximately ten year career, where Shirley worked part-time as a DJ at a classic rock radio station. The band included vocalist , who also played lead and rhythm guitar. Huhn had previously worked with and Victory, and his singing style closely matched original Humble Pie vocalist Steve Marriott in many ways. While Huhn and Shirley were the only permanent members of the group, several other musicians rotated in and out of the band from 1989 to 1999, including , formerly of the and 's band, and noted Cleveland guitarist .

Shirley agreed to disband his version of the group in 1991 when it appeared that a reunion featuring Frampton and Marriott would happen, but after Marriott's death, he carried on with his performances. The group came to an end in 1999 when Shirley returned home to .

Reunions and The Marriott Tribute Concert

Jerry Shirley has participated in a few reunions with original Humble Pie members in the last few years, including an appearance at the "Steve Marriott Tribute Concert" in in 2001 — commemorating the 10th anniversary of Marriott's death — which featured a lineup of , , and Shirley. This performance was later released on DVD.

In October 2004, the song "Get Down to It," the opening track from "Eat It", appeared on the popular , playing on fictional station . The song "Cocaine" is featured in the "".