Drum Workshop[1] (also known as DW Drums or simply DW) is a drum and hardware manufacturing company based in Oxnard, California. Their slogan is "The Drummer's Choice".

Drum Workshop was founded in 1972 as a teaching studio by Don Lombardi. It originally offered private lessons and the occasional workshop. However, Lombardi, along with student (and current Senior Executive Vice President) John Good, began a small drum equipment sales operation to cover the facility's operation costs.

This operation soon created the first-ever DW product: The height-adjustable trap seat, which was envisioned by Lombardi. The demand became so great that, after accepting an offer to purchase all of Camco's manufacturing equipment, the primary focus of the DW operation became drum hardware manufacturing. DW's Camco origins can still be seen on their drums today in their unique round "turret" tuning lugs which were designed by George H. Way and originally featured on George Way drums. Following this, the next big product introduced by DW was the 5000 series nylon strap bass drum pedal, which was essentially a Camco pedal with the DW name placed upon it. The pedal was soon joined by the double bass pedal, the rotating-base and cable remote hi-hat stands. After additional growth and expansion, the first full DW endorser was found in Tommy Lee of Mötley Crüe after he tried out a prototype DW drumset when he came to the shop to get his pedals adjusted.

DW expanded into larger facilities in Oxnard, California, and grew to oversee a new company, Pacific Drums and Percussion,[2] a value oriented company offering quality lower-priced drumsets for any individual.

DW pioneered the timbre-matching technique of grouping a set of drumshells together by listening to the note each shell holds before it is sanded. Each shell that comes out of the DW factory is stamped with the note of that shell on the inside. DW offers pre-made standard sized sets as well as custom drums made to customer specification. 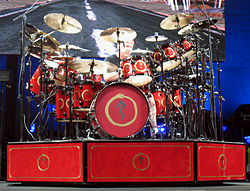 Most of DW's drums can be custom-ordered to suit the customer's needs with a wide array of shell sizes (from 8" to 28" drums), finishes (Exotic, Lacquer, Satin Oil, Hard Satin, Graphics, and FinishPly wraps), and hardware color (chrome, satin chrome, 24-karat gold, black chrome, and black nickel) in any of DW's Custom Shops. Unique to DW's drum kits are its True-Pitch tuning rods (tension rods with finer threads), DW's Coated/Clear drumheads made by Remo, STM tom mounts, and Specialized Shell Configuration (SSC), which allows the customer to choose between X, VLT (Vertical Low Timbre), or VLX shells for a unique sound. They also have cocktail drums, a junior drum kit, bass drum woofers, and effect toms like rata toms and gong drums available.

DW offers a special line of drums that are very different from "standard" drums and are generally used in situations which call for a new sound.

DW manufactures an assortment of snare drums. Available are "made to order" snares, which can be completely customized, or mass-produced snare drums. All DW snares come standard with True-Tone snare wires, Remo batter/resonant heads and True-Pitch Tension Rods. Introduced in 2009 was the DW "Mag Throw-off", which is a snare throw-off system uses a three-way butt plate that has three different settings, loose, medium, and tight. This system uses magnets to keep the snare throw-off in the "on" position, and makes changing the sound of the snare wires much easier. Other throw-off systems include the DW universal throw-off, which is a simple on-off design, and a swivel throw-off which can be turned 180 degrees in any direction to turn the snares on or off. Different-colored snare hardware is available for all DW Drums, and can be easily changed or upgraded.

Collecor's Metal drums come in a variety of metals such as steel, stainless steel, copper, brass, bronze, and aluminum. For 2010, the Vintage Steel line is released and they come in either copper or brass finishes. Steel, copper, brass and bronze snares are only available in the polished vintage finish. The knurled type has been discontinued.

In addition to making drums, DW has also made high-quality drum hardware. Most of DW's hardware feature its patented "TechLock" on their cymbal stands, which uses a drum key to lock the cymbal tilters in place, preventing slippage. Also unique to DW is the development of the DogBone system, which minimizes the use of multiple cymbal stands. They have also developed hardware for percussion instruments as well as a rack system.

In addition to hardware, DW is also known for its extensive line of pedals. A unique feature to DW's pedals is the ball bearing hinge, which helps reduces friction during play. Another unique feature found on DW's double pedals is the single-post casting, which allows the secondary pedal to be positioned closer to the hi-hat, allowing for more fluid footwork.