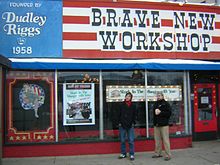 Two theater members in front of the building, Hennepin Avenue

The Brave New Workshop Comedy Theatre (BNW), located in Minneapolis, Minnesota, has been writing, performing and producing live sketch comedy and improvisation performances for 50 years – longer than any other theatre in the nation. The BNW, originally founded as the Instant Theater Company in New York City, was established in Minneapolis in 1958 by Dudley Riggs, with improvised help from Dick Guindon, Irv Letofsky, and Dan Sullivan. (Riggs' parents were circus and vaudeville performers, and he regularly joked that he ran away from the circus to find a home.)

The BNW was named in honor of Aldous Huxley's Brave New World, and bills itself as the oldest ongoing satirical comedy theatre in the nation. More than 300 original productions have been mounted on Brave New Workshop stages for more than three million people. Improv and sketch comedy shows can be seen nearly every night of the week at the BNW’s storefront cabaret-style theatre. The BNW was the featured entertainment for Disney Cruise Lines for several years, and the resident comedy-writing team for NPR's "All Things Considered." Notable alumni of the BNW include Louie Anderson, Mo Collins, Tom Davis (the comedian, not the politician), Al Franken, Penn Jillette, Carl Lumbly, Paul Menzel, Pat Proft, Annie Reirson, Nancy Steen, Peter Tolan, Linda Wallem, Lizz Winstead,[1] Peter MacNicol, Melissa Peterman, and Cedric Yarbrough.

In March 1997, Riggs sold the theatre to new owners John Sweeney, Jenni Lilledahl, and Mark Bergren (Bergren left the BNW in 1999 to pursue other interests). The name of the theatre changed slightly to "The Brave New Workshop, founded by Dudley Riggs in 1958." The new owners continue to produce all-original sketch comedy and improvisation revues on a year-round basis, and have expanded the Brave New Institute (the BNW’s training center for improvisation) to comprise the most broad-based improv curriculum of any training center in the country, with more than 250 students and specific programming for performers, non-performers, youth, seniors, and corporations. Additionally, the theatre’s corporate services division, which applies the secrets of BNW culture to corporate innovation challenges, has grown quickly in recent years. In 2006, Sweeney and the BNW performed over 200 keynote speeches, training workshops, and custom entertainment productions for Fortune 500 clients.

The company briefly relocated to a larger facility in 1998, moved back to the current location in 2002, and operated a satellite location in neighboring Saint Paul, Minnesota for five years beginning in 2001. Recent hit shows at the BNW have included Happiness For Dummies: An Idiot's Guide To The Soul, Prozac: It's What's For Dinner! or Let The Side Effects Begin, Martha Stewart: Prison Vixen; or It’s a Good Thing!, Saturday Night FEMA; or The Roof, The Roof, The Roof is Under Water, Shut Your American Pie-Hole; or Discount Family Values, and The Left, The Right, and The Ugly; or Blue State Blues.

The Brave New Workshop is also a host and supportive partner for Improv A Go Go and the Twin Cities Improv Festival.