Directive on services in the internal market

Directive on services in the internal market

The Directive on services in the internal market (commonly referred to as the Bolkestein Directive) is an EU law aiming at establishing a single market for services within the European Union (EU). Drafted under the leadership of the former European Commissioner for the Internal Market Frits Bolkestein, it has been popularly referred to by his name. It was seen as an important kick-start to the Lisbon Agenda which, launched in 2000, was an agreed strategy to make the EU "the world's most dynamic and competitive economy" by 2010.

The Bolkestein Directive was harshly criticised by left-wing European politicians, who stated that it would lead to competition between workers in different parts of Europe — hence the expression "Polish plumber" — resulting in social dumping. The proposal, after the 2004 original draft had been substantially amended, was approved on 12 December 2006 by the European Parliament and Council, and adopted as the Directive 2006/123/EC.

Devised by the European Commission in 2004, the first draft of the Services Directive propounded several important changes in the EU services market.

However, this would have not applied to the professional rules (where according to the Directive on the Recognition of Diplomas, the rules of the country where the services are provided apply), nor - contrary to popular belief (fearing for example that a Polish Plumber could work in France under Polish labour law) - to Social Legislation and to Health and Safety at Work (HSW).

In these social fields the Posting-of-Workers Directive takes over and determines that short-term social protection such as minimum wages and HSW, are governed by the rules of the country where the services are provided (the host country), while long-term benefits, such as pension and unemployment contributions remain with the country of origin (to which the posted workers returns after the service).

Arguments in favour of the primal version

Legally, the Directive did not bring anything into EU law that had not already been existing in the EC Treaty as interpreted by the Court of Justice. The "Country of Origin" principle has been gradually introduced into EU law of the freedom of movement of goods in Cassis de Dijon case of 1979 and into other areas (services, establishment) soon after.

Secondary legislation, in principle, cannot introduce rights and obligations that do not already have a basis in the Treaty. In this respect, the original draft of the Services Directive was not a novelty but a clarification of the case law of the European Court of Justice and the continuation of the Country of Origin principle that had already been introduced in the TV Without Frontiers Directive, the Second Banking Directive, the Third Insurance Directive, the E-Commerce Directive and others.

Criticisms on the early draft

Protest against Frits Bolkestein in Brussels on March 19, 2005 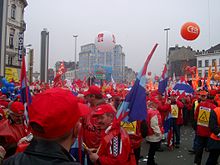 French and Belgian trade unions protesting against the directive in Brussels on March 19, 2005

The first proposal of the Bolkestein Directive provoked intense debate and mass protests in various EU countries, including France, Belgium, Sweden, and Denmark. On 21 March 2005 nearly one hundred thousand marched in Brussels to protest the Directive. The crowd consisted primarily of working people and trade unionists from Belgium, France, Germany, Italy, and the Netherlands according to a contributor to Spectrezine weblog.

Critics argued that the so-devised Directive would erode many of the Member State regulations governing industry and the environment, and would lead to competition between workers in different parts of Europe, resulting in a downward spiral in income levels. The expression "Polish Plumber" became famous during the French debate about the directive, meaning that under this legislation, a Polish plumber would able to work in France under Polish labour laws. Critics also charged that the Directive was a sign that "Anglo-Saxon" style economics was running rampant over the EU, and they warned that the directive led inevitably to "social dumping" -- companies and jobs relocating to the low-cost and less regulated economies of eastern Europe.

The process of "accelerated liberalisation" would have shifted the burden from the liberalisers to regulators, they argued. Assuming every piece of regulation to be burdensome by default, the Directive required member states to justify all existing legislation on the grounds that it was non-discriminatory, necessary and proportional.

Writing in The Guardian of 20 January, David Rowland argued that the Directive posed a threat to the British health care system:

The directive is controversial because it applies the same rules to healthcare and social services as it does to estate agents, fairground providers, advertising companies and private security firms. The commission no longer sees the services provided by doctors to patients as a special public good to be enjoyed by all citizens, but as an "economic activity", a commodity to be traded across the EU much like any other.

He also pointed out the implications for the building trade and environmental protection:

The trade union movement is worried that construction companies will no longer have to abide by UK health and safety laws on building sites, and environmental campaigners fear that local planning rules, which govern where supermarkets can open, will be judged to be an illegal barrier to market entry. Attempts to stem the growth in the number of bars and nightclubs in city centres will also be thwarted by a number of clauses.

Another critic of the Directive, Graham Copp, commented in Red Pepper:

any company in any services industry (be it health, building, advertising or whatever) that was set up in one of the EU’s less regulated economies -– perhaps in one of the new eastern European member states -– could also set up in the UK; and the laws that would govern wages, standards, contracts, etc, for that business in Britain would be those of the eastern European country, for example, not the UK.

The European Trade Union Council argued that the Directive

could speed up deregulation, seriously erode workers’ rights and protection, and damage the supply of essential services to European citizens.

UK health and safety standards are hard won, and this directive threatens to dilute those high standards and compromise British workers and public safety without any redress to UK law or regulatory bodies.

On 22 March 2005, EU leaders, led by France, agreed on a "far reaching" revision of the Services Directive to preserve the European social model. French President Jacques Chirac told an EU summit in Brussels that the changes planned by the Directive were "unacceptable". However, modifications to the Directive were introduced within the normal course of the EU legislative process, at a later stage. The Directive did not disappear from the pipeline because the leaders agreed on the need to "open up" the EU services sector.

"If France wishes to eliminate the risk of social dumping, this will be addressed in the framework of the legislative procedure and of co-decision, which has been initiated," declared Jean-Claude Juncker of Luxembourg.

Parliamentary amendments on the primal version 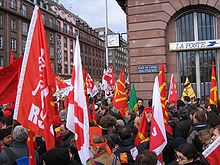 Protests against the directive in Strasbourg on February 12, 2006

On February 14-16, 2006, a plenary session of the European parliament carried out its first reading of the Directive in Strasbourg.[2][3]

On February 16, 2006, MEPs (Members of European Parliament) voted 391-213 in favour of a proposed revision to the Directive, although it has been 'watered down' from the original directive read to the European Parliament on February 14, so much so that Socialist MEP Evelyne Gebhardt said the directive had been 'turned upside-down', a claim contested by labour organisations.

Meanwhile, about 50 000 people demonstrated against the "country of origin principle" in Strasbourg, according to the left wing L'Humanité newspaper.

The majority of members of the two largest groupings in the parliament, the conservative European People's Party (EPP) and the centre left Party of European Socialists (PES) voted in favour of the revised bill.

The Party of the European Left, the European Green Party as well as the French Socialist Party voted against the new revision.

The proposed directive would have covered:[4]

The following however would have been excluded:

The controversial "country of origin principle" was explicitly left over, but there was no "country of destination principle" to replace it either. The European Court of Justice would therefore be charged of deciding, through jurisprudence, which country's labour laws apply themselves in each case.

Comments on the amended draft

The European Commission estimated that this proposed version of the Directive would have created an additional 600,000 jobs in the EU, would have boosted economic growth and would have increased quality and choice for consumers.

The Wall Street Journal estimated that the revised directive would have failed in its objective: the liberalisation of services at the heart of the EU.

D. Godefridi (Hayek Institute) wrote in le Figaro : "Services represent 70% of the European economy. In not liberalising these the EU remains below the objective of the founding treaties of 1957: there is no common European market. For ten years European economic project has moved backwards. On 30 May 2006, the European political elite buried the very essence of the European project".[5]

Left-wing and labour organisations underlined that the new version were not as favorable to workers as it pretends to be, and that the "country of origin principle" would have probably been applied by the European Court of Justice, as a record of its preceding decisions led believe. They especially pointed out that member states were prohibited from demanding any type of administrative authorisation to companies, thus making control of labour laws close to impossible.

Green MP Gérard Onesta declared: "the Bolkestein directive had become a monster... It is now a monster missing a few teeth, but it is still a monster".

Conservative MEP Philippe de Villiers also declared to Le Figaro: "The new Bolkestein directive is a lie"; "In its original form, the directive threatened social dumping for 5,000 professions, the current version still targets 4,000". Henceforth, in the absence of a defined "country of destination principle", the "country of origin principle" would have still applied itself.

On 5 April 2006 the European Commission presented a new version of the directive to the Council of Ministers including most of the modifications voted by the MEPs, in accordance to the codecision procedure.

On 29 May 2006 the Council approved the revised text, which subsequently was resubmitted to the parliament for its second and final reading.

The Directive, after being substantially amended from the original proposal, was adopted on 12 December 2006 by the Council and the European Parliament, and published on the Official Journal of the European Union on 27 December 2006 as the Directive 2006/123/EC. Therefore the Directive on services in the internal market should have been completely implemented by the Member States within the 28th December 2009.[6][7][8]

Although the final version did not include the "country of origin principle", the Directive instead reminded Member States of the principle of free movement, while accepting inroads when free movement collides with other public interests. However, before making such inroads, authorities have to verify and recognize any protection already provided in the country of origin - under the mutual recognition principle, they need to take into account what takes place in other countries before proceeding.[9]

The Services Directive, which came into force on the 28th December 2009, requires all EU Member States to establish web portals so anyone who provides a service will have a "point of single contact" where they can find out what legal requirements they would need to meet to operate in the country in question. Service providers can also use the web portals to apply for any licence or permit they would need.

The Directive should make it easier for EU service providers to operate in any other EU Member State. The UK's Department for Business, Innovation and Skills (Services Directive implementation team), working with marketing consultants, created the EUGO brand for use on point-of-single-contact portals across Europe.[10]