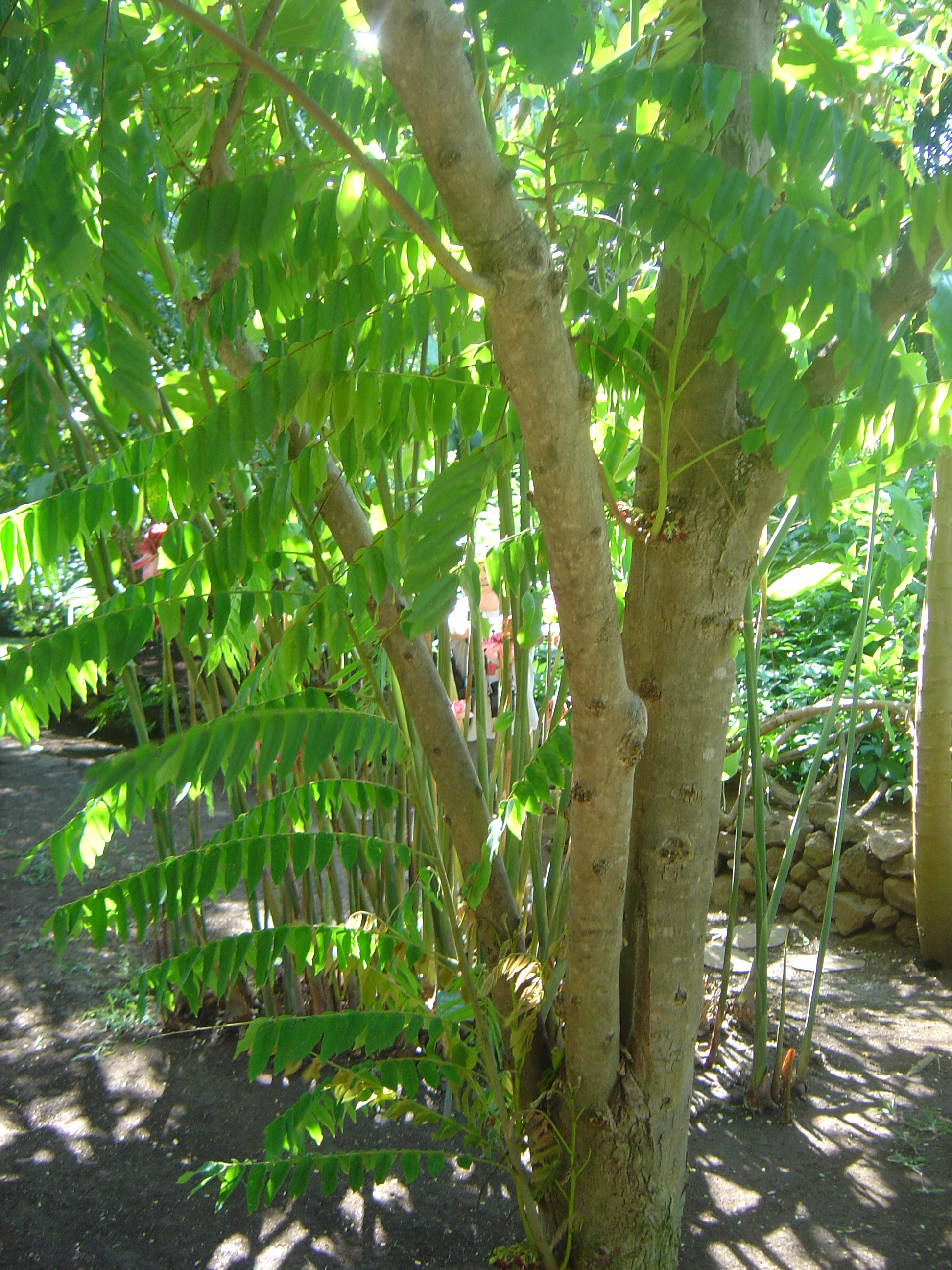 "Averrhoa bilimbi", commonly known as bilimbi, bimbli, belimbing, blimbling, biling (and also bimbiri in Sinhala ), cucumber tree, tree sorrel, or "khế tàu" is a close relative of the , of , .

Possibly originating on the s, , the species is cultivated or found semi-wild throughout , the , , and (Burma). It is common in other Southeast Asian countries. In , where it is usually found in gardens, the bilimbi has gone wild in the warmest regions of the country.

Outside of , the tree is cultivated in . In , the bilimbi was introduced to from and after several years, was cultivated throughout Central and . Introduced to at the end of the 19th , it has been grown commercially in the region since that time.

This is essentially a tree, less resistant to cold than the , growing best in rich and well-drained (but also stands and ). It prefers evenly distributed throughout the year, but with a 2- to 3-month . Therefore the species is not found, for example, in the wettest part of . In , where it is an occasional curiosity, the tree needs protection from wind and cold.

The bilimbi tree is long-lived and reaches 5-10 m in height. Its is short and quickly divides up into ramifications. Bilimbi leaves, 30-60 cm long, are alternate, imparipinnate and cluster at extremities. There are around 11 to 37 alternate or oblong s. The leaves are quite similar to those of the .

Its flowers, like its fruits, are found in hairy s that directly emerge from the trunk as well as from the oldest, most solid branches. The yellowish or purplish flowers are tiny, fragrant and have 5 petals.

The bilimbi fruit's form ranges from ellipsoid to almost cylindrical. Its length is 4-10 cm. The bilimbi is 5-sided, but in a less marked way than the . At the stem's end, the fruit is capped with a star-shape calyx. If unripe, it is bright green and crispy. It turns yellowish as it ripens. The flesh is juicy, green and extremely acidic. The fruit's skin is glossy and very thin.

Bilimbi seeds are small (6 mm) and brown. Their form is disc-like and flattened.

There are few cultivated varieties of bilimbi. However, it has been reported to have a sweet variety in the Philippines.

In the rural parts of the Philippines, where it is commonly found as a backyard plant, it is eaten raw, dipped in rock salt, as a snack. It could either be curred or added as flavoring for the common Filipino dish "". The uncooked bilimbi is prepared as and served with and in . In the , where the tree originates, it is sometimes added to . Bilimbi juice (with a of about 4.47) is made a cooling . In , it is added in some dishes, for substituting tamarind or tomato.

Besides, the fruit can be preserved, which reduces its acidity. The flowers are also sometimes preserved in .

In another part of , , it is preserved by sun-drying, the sun-dried bilimbi is called asam sunti. Bilimbi and asam sunti are popular in nese culinary. It can replace in making . In , it also is made into a , which is rather sweet. [ [http://www.hort.purdue.edu/newcrop/morton/bilimbi.html Bilimbi ] ]

In it is used for making pickles.

In the Philippines, the leaves serve as a on es, swelling, , or skin eruptions. Elsewhere, they are used for bites of poisonous creatures. A leaf is efficient against or as an after-birth tonic, while the flower infusion is used for thrush, cold, and . Malaysians use fermented or fresh bilimbi leaves to cure s.

In Malaysia, very acidic bilimbis is used to clean the "" blade.