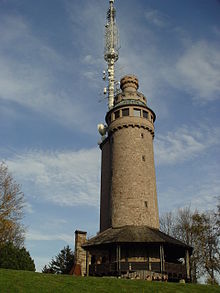 At the end of the 1970s the tower was completely renovated and its radio equipment modified. An underground equipment room for radiotechnical equipment was built, and a new tower was constructed, adjoining the older tower. In this tower also an elevator for visitors was installed. Built between autumn 1980 and December 1982, it is twenty three metres high, constructed from steel and concrete, and carrying a forty metre high aerial mast with FM- and TV-aerials on its top.