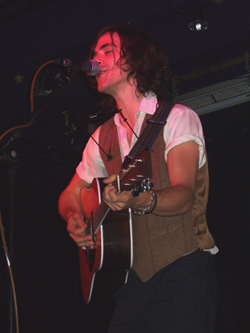 Jack Savoretti (born , ) is a half-English, half-Italian solo acoustic singer who is currently signed to De Angelis Records which was set up by Anne Barrett who is also the former manager of . Jack didn’t pick up a guitar until he was 16. [ [http://www.cdtimes.co.uk/content.php?contentid=4032 CD Times - Jack Savoretti - Between the Minds in March] ] Moving around Europe as a child he wound up at where he picked up an accent he describes as “transatlantic mutt”.

As a teenager, the only thing that interested him was poetry.“I was writing all the time, it was the thing to do, sit under a tree with a notebook, go somewhere else in your head. I was in the clouds.” When his mother gave him a guitar and suggested he try putting some of his words to music he was “surprised how much more people listen to you when you are singing than if you read a poem,” he admits. “After that, I couldn’t stop, it was constant writing, every day, it became almost a form of conversation, the way I interact with the world.”

Anne Barrett signed Jack in one of the unlikeliest stories. Jack was getting his hair cut, just making conversation, when his hairdresser told him she also cut the hair of Anne Barrett. Then she said ‘Would you like me to give her something?’. He got Invited to the De Angelis management offices, Jack went along with a guitar and no expectations. They signed him on the spot. Anne said, “I knew within minutes of meeting Natalie Imbruglia that she had something about her. I got the same feeling from Jack, he has charisma and soul, he is just one of the most exciting raw talents I have ever come across in this business.”

Savoretti has also done 2 duets with called Anyday Now and Hope both of which appear on Poole's album .

Savoretti released his first single on and it was called . The video, filmed in Mallorca, Spain, was directed by Oscar-nominated director Bobby Garabedian. The charted a #90 in the and got B-Listed on Radio 2. His second single was less successful reaching #123 in the UK Singles Chart, it was also playlisted on Radio 2. Savoretti was then spotted by and she invited Jack to perform with her on her European Tour. Since then he has released 2 more singles Between The Minds ( ) and Dr Frankenstein ( ). On he was made his Debut on where he performed Dr Frankenstein. Throughout February and March 2008, Jack embarked on a solo Mini-Tour of bars in the UK.

After his Caffe Nero tour he re-released his debut album with a bounus disc with unplugged versions of some of his songs, 3 new songs as well as a live cover version Johnny Cash's on . 4 days later on he made another television performance performing Gypsy Love on .

Jack recently joined Steve Booker (writer of Duffy’s ‘Mercy’) to write the A side to his current single ‘Gypsy Love’ which captures the sincerity of Jack’s song writing. Songs such as the AA side of his single ‘One Man Band’ are a testament to how he has spent the beginning of the year, and an expression of the ability showcase his voice impeccably without the support of a full band. [ [http://www.cdtimes.co.uk/content.php?contentid=4957 CD Times - Jack Savoretti - UK tour in May] ]