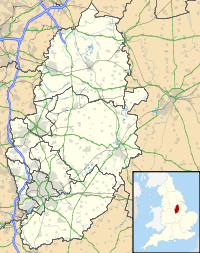 Clumber Park is a country park in the Dukeries near Worksop in Nottinghamshire, England. It was the seat of the Pelham-Clintons, Dukes of Newcastle. It is owned by the National Trust and open to the public.

Clumber, mentioned in Domesday Book was monastic property in the Middle Ages, but later came into the hands of the Holles family.[1] In 1709 it was enclosed as a deer park by John Holles - 4th Earl of Clare, 3rd Earl of Newcastle upon Tyne and 1st Duke of Newcastle. Clumber house, by the River Poulter at the centre of the park, became a hunting lodge, but two generations later, about 1759, the then heir to the estate, Lord Lincoln, decided to make it one of his principal mansions. Over the next few years, work on the house and park proceeded, under the supervision of a carpenter and builder named Fuller White (although he is likely to have been working to plans from architect Stephen Wright). White was dismissed in 1767, and Wright took charge of the project, replacing some of the 1760s features in the 1770s. The project was still not complete when Wright died, and some features in and around the park may have been designed by his successor, John Simpson, in the 1780s.[2]

When, in March 1879 a serious fire destroyed much of Clumber House, the 7th Duke of Newcastle had it rebuilt to designs by Charles Barry, Jr. Another fire, in 1912, caused less damage, but the effects of the First World War and the Great Depression forced the abandonment of the mansion, which, like many other houses during this period, was demolished in 1938.[1] Charles Boot of Henry Boot Construction, was contracted to do the demolition and he removed a vast array of statues, facades and fountains to his Derbyshire home, Thornbridge Hall, although the bulk were lost to private buyers through auction. However, many features remain, including a Grade I listed Gothic Revival Chapel built by the 7th Duke of Newcastle, and a walled kitchen garden with glass houses. 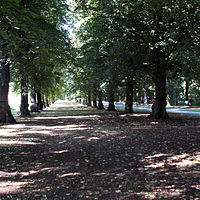 Clumber Park is over 3,800 acres (15 km²) in extent, including woods, open heath and rolling farmland. It contains a superb, serpentine lake covering 87 acres (352,000 m²), and the longest double avenue of lime trees in Europe (pictured). The avenue extends over three miles (5 km), and was created by the 5th Duke of Newcastle in the 19th Century.

The Park was originally left to the people of Worksop by the late Duke of Newcastle but the National Trust bought it in 1946.[3] Some of the park's estate was subsequently closed to the public. There is vehicle access for the areas that are open to the public, and the parking in the central area has a charge (free for members of National Trust).[4] On the way to the main parking area there is also has a cricket pitch with a thatched roof pavilion in the style of a cottage clad in rustic split logs. Along the road side are large open areas to park and picnic. 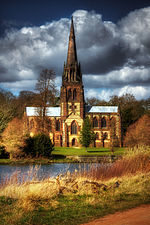 The Gothic revival chapel at Clumber

The park is an excellent place for long walks and has several miles of paths and cycle tracks surrounding the lake. The park has a range of bicycles available for hire including tandems and adult tricycles from an estate building located by the main car park adjacent to the chapel and the Visitors center in the old stable block, were a range of facilities are located. Part of the block house a visitor display on the history of the park, the usual National Trust Shop and Restrauant, and toilets. Off the main lime tree avenue are camping facilities.

Route 6 of the National Cycle Network passes through the park linking it to Sherwood Forest and Sherwood Pines with only a few road crossings necessary.

The Lake was partially rebuilt in the 1980s and again in 2004 after suffering from the effects of coal mining in the area, which caused subsidence. The banks had suffered considerable settlement in some areas.[5]