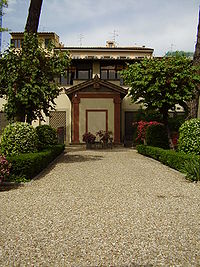 An Etruscan pavilion at the National Archaeological Museum

The National Archaeological Museum of Florence (Italian - Museo archeologico nazionale di Firenze) is an archaeological museum in Florence, Italy. It is located at 1 piazza Santissima Annunziata, in the Palazzo della Crocetta (a palace built in 1620 for princess Maria Maddalena de' Medici, daughter of Ferdinand I de Medici, by Giulio Parigi).

The museum was inaugurated in the presence of king Victor Emmanuel II in 1870 in the buildings of the Cenacolo di Fuligno on via Faenza. At that time it only comprised Etruscan and Roman remains. As the collections grew, a new site soon became necessary and in 1880 the museum was transferred to its present building.

The collection's first foundations were the family collections of the Medici and Lorraine, with several transfers from the Uffizi up to 1890 (except the collections of marble sculpture which the Uffizi already possessed). The Egyptian section was first formed in the first half of the 18th century from part of the collections of Pierre Léopold de Toscane, from another part of an expedition promoted by the same Grand Duke in 1828-29 and led by Ippolito Rosellini and Champollion (the man who first deciphered hieroglyphics). In 1887 a new topographic museum on the Etruscans was added, but it was destroyed in the 1966 floods. 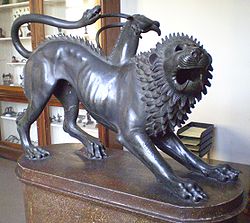 The organisation of the Etruscan rooms was reconsidered and reordered in 2006. Also in 2006, the 40-year-overdue restoration was carried out on over 2000 objects damaged in the 1966 floods. 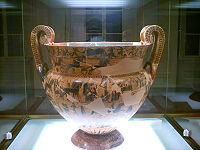 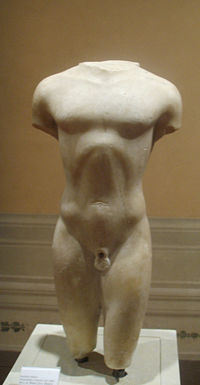 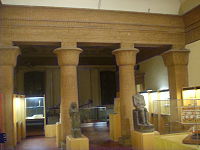 Gallery in the Egyptian collection

The huge collection of ancient ceramics is shown in a large room with numerous cases on the second floor. Generally the vases come from Etruscan tombs and are evidence of cultural and mercantile exchange with Greece, and particularly Athens (where most of the vases were made) and date to the period between the 4th century BC and the present.

The most important of the vases is a large black figure krater of c. 570 BC signed by the potter Ergotimos and the painter Kleitias. It is named the "François vase" after the archaeologist who found it in 1844 in an Etruscan tomb at fonte Rotella, on the Chiusi road, and shows a series of Greek mythological narratives on both sides. Other notable objects are

The Egyptian section of the collection is known as the Egyptian Museum, and is the second largest collection of Egyptian artifacts in Italy, after that of the Museo Egizio in Turin.

Florence's first collection of Egyptian antiquities was in the Medici collection, dating from the eighteenth century. In the nineteenth century, Leopold II, Grand Duke of Tuscany, began acquisition of the artifacts now housed at the Egyptian Museum. Together with Charles X of France, he financed a scientific expedition to Egypt in 1828 to 1829. The expedition was directed by Jean-François Champollion, who deciphered the hieroglyphic script. Ippolito Rosellini, friend and student of Champollion, represented the Italian interests during the expedition. He went on to become the father of Italian Egyptology. Many artifacts were collected during the expedition, both from archeological diggings, and via purchases from local merchants. On their return, these were distributed evenly between the Louvre in Paris, and the new Egyptian Museum in Florence.

The museum was officially opened in 1855. The first director was Ernesto Schiaparelli, from Piedmont. He later went on to become director of the larger Egyptian museum in Turin. By 1880 he had catalogued the collection and organized transportation of the antiquities to the Florentine Archaeological Museum. Under Schiaparelli, the collection expanded with further excavations and purchases carried out in Egypt. Many of the artifacts were, however, later transferred to Turin.

The Florentine collection continued to grow after this time, with donations from private individuals and scientific institutions. In particular, the Papyrological Institute of Florence provided artifacts from its expeditions to Egypt between 1934 and 1939. These now provide one of the most substantial collections of Coptic art and documents in the world.

The museum now has a permanent staff including two professional Egyptologists. It houses more than 14,000 artifacts, distributed in nine galleries and two warehouses. The artifacts displayed in the galleries have been substantially restored. The old classification system devised by Schiaparelli is being replaced by a new, chronological and partly topographical system.

The collection comprises material that extends from the prehistorical era right through to the Coptic Age. There are remarkable collections of stele, mummies, ushabti, amulets and bronze statuettes of several eras. There are statues from the reign of Amenhotep III, a chariot from the eighteenth dynasty, a pillar from the tomb of Seti I, a New Testament papyrus (