Isotopic labeling (or isotopic labelling) is a technique for tracking the passage of a sample of substance through a system. The substance is 'labeled' by including unusual isotopes in its chemical composition. If these unusual isotopes are later detected in a certain part of the system, they must have come from the labeled substance.

Isotopic labeling can also be used to study chemical reactions. In this method specific atoms are replaced by an isotope in a reactant molecule which then participates in a chemical reaction. With spectroscopy, nuclear magnetic resonance spectroscopy for example, it is now possible to identify where a particular molecular fragment in the reactant ends up as a particular fragment in one of the reaction products.

An example of the use of isotopic labeling is the study of phenol (C6H5OH) in water by replacing common hydrogen (protium) with deuterium (deuterium labeling). Upon adding phenol to deuterated water (water containing D2O in addition to the usual H2O), the substitution of deuterium for the hydrogen is observed in phenol's hydroxyl group (resulting in C6H5OD), indicating that phenol readily undergoes hydrogen-exchange reactions with water. Only the hydroxyl group was affected, indicating that the other 5 hydrogen atoms did not participate in these exchange reactions.

For these purposes, a particularly useful type of radioactive decay is positron emission. When a positron collides with an electron, it releases two high-energy photons traveling in diametrically opposite directions. If the positron is produced within a solid object, it is likely to do this before traveling more than a millimeter.[citation needed] If both of these photons can be detected, the location of the decay event can be determined very precisely.

Strictly speaking, radioisotopic labeling includes only cases where radioactivity is artificially introduced by experimenters, but some natural phenomena allow similar analysis to be performed. In particular, radiometric dating uses a closely related principle. 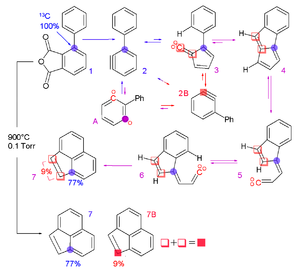 An isotopic tracer, (also "isotopic marker" or "isotopic label"), is used in chemistry and biochemistry to help understand chemical reactions and interactions. In this technique, one or more of the atoms of the molecule of interest is substituted for an atom of the same chemical element, but of a different (often radioactive, such as in radioactive tracing) isotope. Because the atom has the same number of protons, it will behave in almost exactly the same way chemically as other atoms in the compound, and with few exceptions will not interfere with the reaction under investigation. The difference in the number of neutrons, however, means that it can be detected separately from the other atoms of the same element.

NMR typically uses this type of technique to investigate the mechanisms of chemical reactions (basically trying to find out which starting atom ends up where after a reaction), because NMR detects not only isotopic differences, but also gives an indication of the position of the atom.

Mass spectrometry can also be used with this technique, since mass spectra recorded with sufficiently high resolution can distinguish among isotopes based on the different masses resulting from the different number of neutrons.

Autoradiographs of gels in gel electrophoresis can also take advantage of this approach. In this technique, radioactive isotopes are used. The radiation emitted by compounds containing the radioactive isotopes darkens a piece of photographic film, recording the position of these compounds relative to one another in the gel.

Isotopic (isotope) tracers are some of the most important tools in geology, because they can be used to understand complex mixing process in earth systems. Isotope tracers are almost always used in the form of isotope ratios. By studying the ratio between two isotopes of the same element, we avoid effects involving the overall abundance of the element, which would usually swamp the much smaller variations in isotopic abundances. Further discussion of the application of isotopic tracers in geology is covered under the heading of isotope geochemistry.