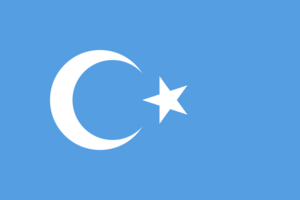 The First Eastern Turkestan Republic (ETR), or Turkish Islamic Republic of East Turkestan (TIRET), or, Republic of Uyghurstan, was a short-lived break-away would-be al founded in 1933. It was centered around the city of in what is today the -administered region of . Although primarily the product of the separatist, Islamic and aspirations of the Uyghur population living there, the ETR was multi-ethnic in character, including , , and other Turkic minorities in its government and its population.

With the sacking of Kashgar in 1934 by Hui warlords theoretically allied with the government in , the first ETR was effectively eliminated. Its example, however, served to some extent as inspiration for the founding of a a decade later, and continues to influence modern Uyghur support for the creation of an independent . was the General Secretary of the First East Turkestan Republic.

Origins of the ETR Movement

The stirrings of Uyghur separatism during the early 20th century were greatly influenced by the Turkish movement, which spread as wealthier Uyghurs, inspired by notions of , traveled abroad to Turkey, Europe, and Russia, and returned home determined to modernize and develop the educational system in . The first major school founded on the European model was located outside of and, unlike the traditional curricula of the , focused on more technical areas of study such as , , , and language studies. emphasized the power of education as a tool for personal and national self-advancement, a development sure to disturb the traditional status quo in Xinjiang. The ruler of Xinjiang, Governor (楊增新), responded by closing down or interfering with the operations of several of the new schools.

The birth of the and the also influenced the Uyghurs, increasing the popularity of nationalist separatist movements and the spread of the message. Although a local Communist revolutionary organization was established in Xinjiang in 1921, the area also served as a refuge for many intellectuals fleeing the advent of Soviet Communism in Central Asia, which formed a division within the Xinjiang Turkic nationalist movement.

The situation in deteriorated with the of Yang Zengxin in 1928 and the rise to power of his deputy, (金樹仁), who declared himself governor after arresting and executing Yang's assassin, a rival official named (樊耀南) who had planned to assume the position for himself. Autocratic, corrupt, and ineffective at managing the province's development, Jin further antagonized the populace by reinstituting policies, increasing taxes, prohibiting participation in the and bringing in officials to replace local leaders.

The situation came to a head in 1930, when the khan of () in eastern , , died. In policies carried over from the era, the khan had been allowed to continue his rule over the area consistent with the principles of or . The importance of Hami territory, strategically located straddling the main road linking the province to eastern China and rich in undeveloped farmland, together with a desire by the government to consolidate power and eliminate the old practice of indirect rule, led Jin to abolish the khanate and assert direct rule upon Shah Mexsut's death.

Jin Shuren then proceeded to double agricultural taxes upon the local Uyghur population, choice farmland, and distributed it among refugees from neighboring province, subsidizing their efforts and resettling displaced Uyghurs on poor-quality land near the desert. The new stationed in proved even more antagonizing, and by 1931, scattered revolts, mobs, and resistance movements were emerging throughout the area. The final straw was in February 1931 when an ethnic Chinese officer Chieng wished to marry a Uyghur girl from a village outside . Uyghur accounts usually claim that the girl was raped or the family coerced, but as Islamic law forbids Muslim girls to marry non-Muslim men it was clearly offensive to the Uyghur community.

Rebellion broke out on , with a massacre of Chieng and his 33 soldiers on wedding ceremony, 120 Han Chinese refugees from Gansu also were killed. It was not confined to the ethnic Uyghur population alone; , , and Hui commanders all joined in revolt against Jin's rule, though they would occasionally break to fight one another.

The (KMT) and governments further complicated the situation by dispatching troops to come to the aid of Jin and his military commander (盛世才), as did refugees from the Soviet Union living in the valley region.

Principle fighting initially centered around , which Uyghur and Hui forces laid under siege until 's troops were reinforced by and soldiers who had previously fled the Japanese invasion into northeast China. In April of 1933, Jin was deposed by a combination of these forces and succeeded by Sheng, who enjoyed Soviet support. Newly bolstered, Sheng split the opposing forces around Urumchi by offering several Uyghur commanders (led by , an advisor to the recently deceased khan) positions of power in southern Xinjiang if they would agree to turn against the Hui armies in the north, led by (馬仲英).

Another Hui faction in southern Xinjiang, meanwhile, had struck an alliance with Uyghur forces located around under the leadership of and proceeded to march towards . The joint Uyghur and Hui force surrounding the city split again, as Hui commander (馬占倉) allied with the local provincial authority representative, a fellow Hui named (馬紹武), and attacked the Uyghur forces, killing Timur Beg.

Establishment of the ETR

While this was transpiring, in the nearby southern city of , three brothers of rich Bughra family educated in the tradition had led a rebellion of gold miners who worked in mines near city, also in Yurunkash and Karakash mountain rivers, and established themselves as of the city, having declared the Khotan and from China on ,.

Local provincial authorities and troops were annihilated by the miners throughout Khotan , rare Chinese population in most cases saved their lives and property, but was forced to accept under the threat of execution. The Khotan Emirate dispatched one of the three brothers, Shahmansur Amin Bughra (known also as Abdulla ), and a former publisher named Sabit Damolla to Kashgar, where they established the , led by , in July of 1933. By the fall of that year, the office had shed many of its links to the Khotan government and reformed itself into the multi-ethnic, quasi-nationalist , which drew heavily on ideas of Islamic reformism, and .

In September 1933, Sabit Damolla declared the establishment of the East Turkistan Republic with as its president &mdash; despite the fact that the respected commander was engaged in fighting in northern Xinjiang and had actually allied his forces with those of .

On Independent (Turkish Islamic Republic of Eastern Turkestan- TIRET or Republic of , both names were used at the same time ) was proclaimed.

Established distinct from the , the ETR claimed authority over territory stretching from Aksu along the northern rim of the to in the south. In fact, the government in was strapped for resources, plagued by rapid , and surrounded by hostile powers &mdash; including the Hui forces under . Although established as a multiethnic republic, as reflected in the choice of the "East Turkestan" name used in its founding , the first coins of the new government were initially minted under the name "Republic of Uyghurstan" ("Uyghurstan Jumhuriyiti"). In some sources, it is known as the "East Turkestan Islamic Republic", suggesting a greater role for in its founding character. The extent of Islam's influence in the foundation of the ETR is disputed; while the constitution endorses as the guiding law, the modernizing tradition places much greater emphases on reform and development, which is reflected in subsequent passages of the constitution that focus on health, education, and economic reforms.

The efforts of "Turkish Islamic Republic of Eastern Turkestan" (TIRET) to receive international recognition had been failed despite of despatching the numerous envoys having been sent by Prime-Minister Sabit Damolla to (, ), , , and . rejected all offers of dealing with s. In Kashgar representatives met with new-proclaimed King of Afghanistan and Prime-Minister , asking for aid and supply of arms. But both preferred to keep neutrality and not to interfere into China affairs. The same way reacted other countries, refusing to deal with envoys as representatives of independent country. No one wanted to make a challenge to the powerful Soviet Union and China in their politics and become to be engaged in bloody fighting in , which already claimed lives of around 100,000 of its populace. Thus leaving to the fledgling Republic, which was surrounded from almost all sides by hostile powers (s, s, Chinese), a very little chance to survive.

The "Turkish-Islamic Republic of Eastern Turkestan"(TIRET) had some links with , because of the Axis interest during 1930-37 to exploit Pan- sentiments. TIRET as a result tried (through German representatives in ), but failed to receive recognition from Germany, instead supported the KMT.

In the north, aid came to 's forces on in the form of two Soviet , the and , disguised as " Volunteer Army" and led by General Volgin. The ese annexation of and rumored support for 's Hui forces were one cause for concern; equally troubling for was the prospect that rebellion in might spread to the Soviet and offer a haven to Muslim s. Trade ties between Xinjiang and the Soviet Union also gave the Soviets motivation to support Sheng further.

The Soviet brigades, backed by , scattered Ma Zhongying's troops surrounding Urumchi and forced them to retreat southward. On the siege of Urumchi was lifted, terminating the period of uncertainty and despair for Sheng and s Cossack troops, which were trapped in the city by Ma forces since .

had by this time arrived in to assume presidency of the ETR, going against his previous deal with Sheng. Arrived with him another prominent uyghur leader from Eastern Sinkiang ( , ) Mahmut Muhiti ( known as Mahmut "Sijan", i.e. division general ) had agreed to become a minister of Defence in ETR Government, accepting the offer of Prime-Minister Sabit Damolla.

Nevertheless, the ETR (TIRET) proved to be short-lived. The Hui forces retreating from the north linked up with 's forces in allied themselves with the Kuomintang in , and attacked the TIRET, forcing Niyaz, Sabit Damolla, and the rest of the government to flee on to Yengi Hissar south of the city. The conquering Hui army killed many of those who remained, and a rapid procession of betrayals among the survivors, following their expulsion from Kashgar, spelled the effective end of the TIRET.

Mahmut Muhiti retreated with remainder of Army to and , while Hoja Niyaz Hajji fled through Artush to Irkeshtam on Soviet/Chinese border, with tungan troops on his heels, which were chasing after him till the border. Hoja Niyaz took refuge in the USSR, where he was blamed by Soviets for accepting from Sabit Damolla the position of first leader of TIRET (), but was promised a military aid and "great prospects for the future" if he would help Sheng Shicai and Soviets "to dissolve TIRET".

After signing the Document of TIRET dismissal and disbanding of its troops Hoja Niyaz Hajji returned to Eastern Turkestan where he turned Sabit and several other TIRET ministers to Sheng, who rewarded him with control over southern as previously promised; those who escaped fled to and .

The KMT-aligned Hui forces under were suppressed, and Sheng consolidated his rule over the province thanks to extensive Soviet support. The seat of Hoja Niyaz Hajji Southern Xinjiang Autonomous Government had initially been established in the city of Aksu, but later he was urged by Sheng Shicai to move to Urumchi to assume position of the vice-chairman of Xinjiang Government. His forces received 15,000 rifles and ammunition from USSR, but each rifle, each bullet and each bomb, that was dropped on Tungan troops from Soviet airplanes, had been paid by Hoja Niyaz Hajji to by gold.