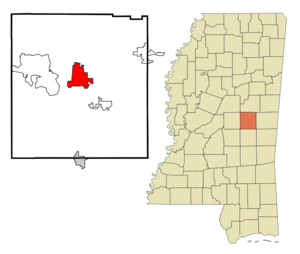 Philadelphia is the of Neshoba CountyGR|6, , . With a population of 7,303 at the 2000 census, Philadelphia is most noted for the racial violence, murders, and other civil rights violations that occurred in the mid 1960s. As has been common for small towns across the U.S. in the last part of the twentieth century and since, the economic base of the town and surrounding area has been adversely affected by the abandonment by long-present industries that have down-sized, consolidated or moved to more financially beneficial locations. However, this adverse effect has been offset or even reversed by the development of an entertainment and gaming industry center at the Pearl River Resort, located on the nearby reservation of the Mississippi Band of Choctaw Indians.

Built on the site of a former Choctaw settlement, the town was first named “Neshoba Courthouse”, with that town charter being signed by President Martin Van Buren in 1841. Philadelphia was incorporated as a municipality and given its current name in 1903, two years before the railroad brought new opportunities and prosperity to the newly renamed town. The history of the town and its influences- social, political and economic- can still be seen in the many points of interest within and beyond the city limits, from the large ceremonial Indian mound and cave at Nanih Waiya to the still thriving Williams Brothers Store, a true old fashioned general store founded in 1907 and featured in National Geographic in 1939 as a source of anything from “needles to horse collars”, and still offering everything from bridles, butter and boots to flour, feed and fashion.

Philadelphia is known as the site of one of the most famous race-related crimes in American history. In 1964,
three civil rights workers were murdered by white supremacists in Philadelphia. The crime and decades-long legal aftermath inspired the 1988 movie .

In 1980 gave his first post-convention speech after being officially chosen as the Republican nominee for President of the United States a few miles from Philadelphia, announcing at the annual , that with specific regard to economic policy, "I believe in states' rights ... [I] believe we have distorted the balance of our government today by giving powers that were never intended to be given in the Constitution to that federal establishment." He went on to promise to "restore to states and local governments the power that properly belongs to them".

Some thought Reagan's speech marked the continuation of the successful Republican ""; this was supposedly evidence of Reagan's libertarian belief in and a greater role for states in determining their own policies. However, given the history of Philadelphia, and Reagan's use of the words "states' rights", often interpreted as a desire to return to pre-Civil War laws regarding segregation, many felt that Reagan was at least insensitive to the concerns of blacks, or that he even was using this location and these words as a cynical appeal to the white racist vote. [http://krugman.blogs.nytimes.com/2007/11/10/innocent-mistakes/] [http://www.nytimes.com/2007/11/13/opinion/13herbert.html] Others, while not denying that the "states' rights" phrase was insensitive, point out that Reagan was speaking of economic policy, not race, when he made that remark, that reports at the time stated that the audience did not think he was speaking about race, and that Reagan was on his way to speak to the National Urban League where he stated the next day, "I am committed to the protection and enforcement of the civil rights of black Americans. This commitment is interwoven into every phase of the programs I will propose," hardly evidence that he was engaging in an overtly racist strategy. [http://www.volokh.com/archives/archive_2008_01_13-2008_01_19.shtml#1200709160]

There were 2,950 households out of which 30.4% had children under the age of 18 living with them, 40.8% were married couples living together, 20.4% had a female householder with no husband present, and 35.6% were non-families. 32.5% of all households were made up of individuals and 15.2% had someone living alone who was 65 years of age or older. The average household size was 2.38 and the average family size was 3.00.

The City of Philadelphia is served by the .

*Olivia Williams Manning, wife of former quarterback and mother of current s Peyton and
*, country music entertainer and star
*, 1959 winner
*, considered by many to be one of the best special teams players in NFL history. He retired as a member of the New Orleans Saints in 2006 and now is their Director of Player Development.
*, blues artist
*members of the country music band Pearl River
*, professional wrestler better known as Uncle Elmer

services for the city of Philadelphia are contracted to . [ [http://www.metrocast.com Metrocast Communications Website] ] Electrical utilities, as well as water and sewer service, are provided by the City of Philadelphia as . The natural gas utility is . is the local telephone service provider.

* [http://www.neshoba.org/ Official webpage for the City of Philadelphia]