Columbus is a city in Lowndes County, Mississippi, United States that lies above the Tombigbee River. It is approximately 146 miles (235 km) northeast of Jackson, 92 miles (148 km) north of Meridian, 63 miles (101 km) south of Tupelo, 60 miles (97 km) northwest of Tuscaloosa, Alabama, and 120 miles (193 km) west of Birmingham, Alabama.[1] The population was 25,944 at the 2000 census. It is the county seat of Lowndes County[2] and the principal city of the Columbus Micropolitan Statistical Area, which is part of the larger Columbus-West Point Combined Statistical Area. Columbus is also part of the area of northeast Mississippi called The Golden Triangle, consisting of Columbus, West Point and Starkville, in the counties of Lowndes, Clay and Oktibbeha.

The first record of the site of Columbus in Western history is found in the annals of the explorer Hernando de Soto, who is reputed to have crossed the nearby Tombigbee River on his search for El Dorado. However, the site does not enter the main continuity of American history until December 1810, when John Pitchlynn, the U.S. interpreter for the Choctaw Nation, had moved to Plymouth Bluff, where he built a home, established a farm and transacted Choctaw Agency business.

Columbus was founded in 1821. Before its incorporation, the town site was referred to informally as Possum Town, a name which was given by the local Native Americans. The name Possum Town remains the town's nickname by locals even today. Columbus's existence is owed to the failure of a flooded settlement across the river, Plymouth, which was established in 1817. The Plymouth Bluff (above the ruined settlement) is today an environmental center for Mississippi University for Women. The survivors of the flood moved to a site occupied by Thomas Moore and Dr. Gideon Lincenum. Silas McBee suggested the name Columbus; in return, a small local creek bears McBee's name.[3]

One of the first actions taken by the city's founders was to establish a public school, Franklin Academy. This school is still being used today. As the territory had achieved statehood only a year previously, Franklin thus became Mississippi's first public school. However, this fact was not immediately recognized; early in its history, Columbus was referred to as Columbus, Alabama, due to a mistaken estimate of the territorial boundary.

During the American Civil War, Columbus was a hospital town. However, Columbus also had an arsenal that made gunpowder, handguns and a few cannon. Because of this the Union tried to invade Columbus more than once but was stopped by General Nathan Bedford Forrest. Many of the casualties from the Battle of Shiloh were brought there, and thousands were buried in the town's Friendship Cemetery. One of the hospitals was located at the still-operating Annunciation Catholic Church, built in 1863. The decision of a group of ladies to decorate the Union and Confederate graves with flowers together on April 25, 1866, is an early example of what became Memorial Day. A poet, Francis Miles Finch, happened to be in town that day and commemorated the occasion with the poem "The Blue and the Grey".

As a result of Nathan Bedford Forrest preventing the Union Army from reaching Columbus, the Antebellum homes of Columbus were spared from being burned or destroyed, making its collection second only to Natchez as the most extensive in Mississippi. These antebellum homes may be toured during the annual Pilgrimage in which the residences open their homes to tourists from around the country.

During the war, Columbus attorney Jacob H. Sharp served as a brigadier general in the Confederate Army. After the war, he owned the Columbus Independent newspaper and served four years representing the district in the Mississippi House of Representatives.[4]

Columbus has hosted Columbus Air Force Base (CAFB) since World War II. CAFB was founded as a flight training school. After a stint in the 1950s and 1960s as a Strategic Air Command (SAC) base (earning Columbus a spot in Soviet Union target lists), CAFB returned to its original role. Today, it is one of only four basic Air Force flight training bases in the United States, and prized as the only one where regular flight conditions may be experienced. Despite this, CAFB has repeatedly hung in the balance during Base Realignment and Closure (BRAC) hearings.

Columbus boasted a number of industries during the mid-20th century, including the world's largest toilet seat manufacturer, Sanderson Plumbing Products, and major mattress, furniture and textile plants. Most of these had closed by 2000. A series of new plants at the Golden Triangle Regional Airport, including the Severstal mill, the American Eurocopter factory, the Paccar engine plant and the Aurora Flight Sciences facility, are revitalizing the local economy.

Columbus has made the national news at least three times in the past two decades. On June 12, 1990, a fireworks factory exploded, detonating a blast felt as far as 30 miles away from Columbus. Two workers were killed in the blast. On June 26, 2000, the television show 48 Hours did an investigative report of five murders of senior citizens occurring in an 18-month period between late 1997 and early 1999. On February 16, 2001, straightline winds measured at 74 miles per hour destroyed many homes and trees but fortunately resulted in no fatalities. The city was declared a federal disaster area the next day by President George W. Bush. Less than two years later in November 2002, a tornado hit Columbus and caused more damage to the city, including the Mississippi University for Women.

In 2010, Columbus won a Great American Main Street Award from the National Trust by Historic Preservation.[5]

Columbus' city newspapers are the daily (except Saturdays) Commercial Dispatch and the weekly Columbus Packet. One television station, WCBI-TV, the CBS affiliate, is located in the city's historic downtown area; it broadcasts CW and MyNetworkTV programming on digital subchannels.

Two magazines are published in Columbus: The New Power Magazine, a regional urban magazine, and Columbus Fire and Rescue Magazine. 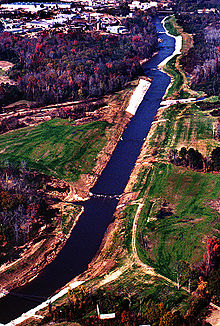 Luxapalila Creek running through the center of Columbus. View is upstream to the north.

According to the United States Census Bureau, the city has a total area of 57.8 square kilometers (22.3 sq mi) – 55.5 square kilometers (21.4 sq mi) of it is land and 2.3 square kilometers (0.9 sq mi) of it is water. Large lakes and rivers run nearby the area such as the Buttahatchee River in Northern Lowndes County that defines the border between Lowndes and Monroe counties Mississippi; in the middle of the City of Columbus and Lowndes County Lies the Luxapalila Creek, and the Tombigbee River with the Stennis Lock and Dam impounding Columbus Lake. Columbus is a relatively flat place in the Northern part of Lowndes County the land rises for a short period of time into hills and bluffs, in the Southern/Eastern part of the county the land has rolling hills that quickly turn into flatland floodplains that dominate this county. This county lies in the Black Prairie Geographic Region, and the Northeastern Hills Region of the state/area. Forests, Prairies, Forests, and Floodplain Forests lie here. Surprisingly the soil quality is poor in the eastern part of the county, otherwise the soil is relatively fertile in most of the county. Columbus and the surrounding areas are listed as a Arbor Day Hardiness Zone 8a (10-15 deg F) ,note that temperatures in 2010 reached 11F, but the USDA Hardiness Zones list the area as zone 7b (5-10).[6]

Columbus lies on U.S. Highways 82 and 45. It is also served by state routes 12, 50, 69, and 182. Columbus is the eastern terminus of the Columbus and Greenville Railway; it is also served by the BNSF Railway (on the original right-of-way of the St. Louis - San Francisco Railway), the Norfolk Southern, and the CN (using the original right-of-way of the Gulf, Mobile, and Ohio). The local airport is Golden Triangle Regional Airport. The airport currently has three flights a day to Atlanta and two flights a day to Memphis. The city is located on the east bank of the Tombigbee River and the associated Tennessee-Tombigbee Waterway. Columbus Lake, formed by the John C. Stennis Lock and Dam, is approximately two miles north of downtown. The Luxapalila Creek runs through the town, separating East Columbus from Columbus proper (both are within city limits). The Lux, as it is locally known, joins the Tombigbee about three miles south of downtown.

Columbus is home to a state university, the Mississippi University for Women. The MUW campus is also home to the Mississippi School for Mathematics and Science, a state-funded school for academically gifted high school juniors and seniors.

The city's public high school (under the Columbus Municipal School District) is Columbus High School, located in the eastern part of town. It is the largest high school in the city and fifth largest in the state, enrolling approximately 1370 students. Columbus High School was formed by the merger of the city's two previous high schools, Stephen D. Lee High School and Caldwell High School; the schools were merged in 1992 and the campuses in 1997. Columbus is also home to the oldest public elementary school in Mississippi, Franklin Academy Elementary, founded in 1821.

Columbus has several private schools, including: