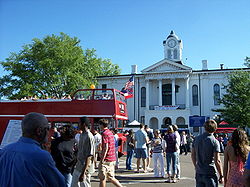 A British double-decker tourist bus and the Mississippi state flag contrast beside the Lafayette County Courthouse in Oxford, Mississippi, during the 2007 Double Decker Festival.

Oxford is a city in, and the county seat of, [1] Lafayette County, Mississippi, United States. Founded in 1835, it was named after the British university city of Oxford in hopes of having the state university located there, which it did successfully attract.

As of the 2010 US Census, the population is 14,147. In 2008, the city annexed five square miles of Lafayette County in all directions, which represented 33% of Oxford's fifteen square miles at the time, resulting in a smaller 2010 population count than in previous years.[2] Oxford is the home of the University of Mississippi, founded in 1848, also commonly known as "Ole Miss."

Oxford has been named by USA Today as one of the top six college towns in the nation. It is included in The Best 100 Small Towns in America. Lafayette County consistently leads the state rankings in the lowest unemployment rate per quarter. Oxford City Schools are ranked as "Star" schools, the highest ranking available, and Lafayette County school systems are consistently ranked as "5-star" systems.

Oxford became a center of culture as the location of the University of Mississippi, founded in 1848 as the first rank college of the state. The university was segregated until 1962.

In a pattern typical of many areas, after the Civil War numerous freedmen moved from farms into town to establish their own community. They called their neighborhood "Freedmen Town". They built houses, businesses, churches and schools, eagerly embracing education. They exercised all the rights of citizenship.[3] Even after Mississippi disenfranchised most African Americans and poor whites with provisions of its new constitution in 1890, they proceeded to build their lives in the face of discrimination.

During the Civil Rights Movement, Oxford gained national attention in 1962 as a combination of the governor and University of Mississippi officials attempted to prevent James Meredith, an African American, from integrating the University of Mississippi after he won a federal court case for admittance. Meredith began his quest for admission in January 1961, after watching John F. Kennedy's inaugural speech. Meredith sent a letter to the Registrar of The University of Mississippi requesting a catalog and an application for admission. University officials responded promptly with the materials and invited Meredith to apply. When officials learned from Meredith that he was African-American, his application was immediately rejected without comment, and Meredith's legal battles with the University began. Meredith was finally admitted in the summer of 1962 by a federal court in New Orleans, and made preparations to begin his studies in the fall of 1962. President John F. Kennedy, after secret telephone negotiations with Democratic Governor Ross Barnett, ordered United States Marshals to protect Meredith. Meredith traveled to Oxford under armed guard to register in late September 1962, and riots broke out in protest of his admittance. Thousands of armed "volunteers" flowed into the Oxford area to prevent Meredith's admittance. During the rioting, late on the evening of Sunday, September 30, 1962, two men, a French journalist sent to cover the events, and a Lafayette County resident, Ray Gunter, were killed by stray bullets. During the riots by segregationists, cars were burned, federal marshals were pelted with rocks, bricks, small arms fire and university property was damaged. The Mississippi Highway Patrol, on campus to supposedly provide security for the University and for Meredith, stood by passively while the riots were taking place.

Order was restored to the campus with the early morning arrival of the U. S. Army. Although President John F. Kennedy had mobilized the Army and ordered them onto the campus early on the evening of the riot, poor communication delayed their arrival in force until the following morning (Monday, October 1). Meredith enrolled that morning without incident and attended for the rest of the school year, graduating in August 1963 with a degree in history. During his time at the University, Meredith lived in Baxter Hall, which is now the telecommunications center for the university. A plaque has been placed inside the front entrance to Baxter Hall which recounts Meredith's time spent there. As recounted in Meredith's book Three Years in Mississippi, students on the floor right above Meredith's room tried to keep him awake all night by bouncing a basketball on the floor, he was constantly insulted with racial slurs whenever he left his room or the building, anonymous notes and letters were delivered to his mailbox on a daily basis, and unlike most first-year college students, he lived in a suite of several rooms. Two United States Marshals were with him 24 hours a day, with another contingent of marshals escorting him to class and elsewhere on campus.

The land is hilly in places but is generally level. To the west is the Mississippi Delta. It is within one hundred miles of Memphis, Tennessee.

Oxford is located at the confluence of highways from eight directions: Mississippi highway 6 (now co-signed with US-278) runs west to Batesville and east to Pontotoc; highway 7 runs north to Holly Springs and south to Water Valley. Highway 30 goes northeast to New Albany; highway 334 ("Old Highway 6") southeast to Toccopola; Taylor Road southwest to Taylor, and highway 314 ("Old Sardis Road") northwest, formerly to Sardis but now to the Clear Creek Recreation Area on Sardis Lake.

The streets in the downtown area follow a grid pattern with two naming conventions. Many of the north-south streets are numbered from west to east, beginning at the old railroad depot, with numbers from four to nineteen. The place of "Twelfth Street," however, is taken by North and South Lamar Boulevard (formerly North and South Streets). The east-west avenues are named for the U.S. presidents in chronological order from north to south, from Washington to Cleveland; here again, there are gaps: John Quincy Adams would be indistinguishable from John Adams; "Polk Avenue" is replaced by University Avenue, and "Arthur Avenue" is lacking.

The City of Oxford is served by the Oxford School District and by the private Oxford University School. It is the home of the main campus of the University of Mississippi, known as "Ole Miss", and of the Lafayette-Yalobusha Center of Northwest Mississippi Community College.

Oxford is home to the National Center for Natural Products Research at the University of Mississippi's School of Pharmacy. The Center is the only facility in the United States that is federally licensed to cultivate marijuana for scientific research, and for distribution to patients who are allowed marijuana for medical purposes. 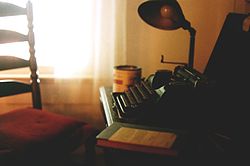 William Faulkner's Underwood Universal Portable typewriter in his office at Rowan Oak (see below), which is now maintained by the University of Mississippi in Oxford as a museum. 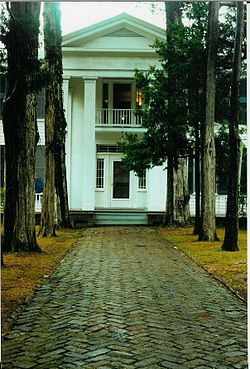 More than 3000 journalists came to Oxford on September 26, 2008 to cover the first presidential debate of 2008, which was held at the University of Mississippi.[6]