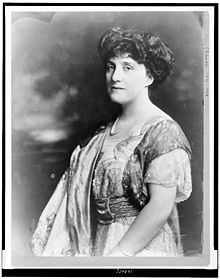 Mary Roberts Rinehart (August 12, 1876-September 22, 1958) was an American writer, often called the American Agatha Christie.[1] She is considered the source of the phrase "The butler did it", although she did not actually use the phrase. She is considered to have invented the "Had-I-But-Known" school of mystery writing. She also created a costumed supercriminal called "the Bat," who was cited by Bob Kane as one of the inspirations for his "Batman." 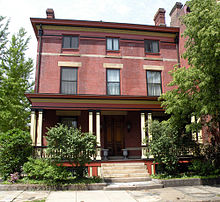 House where Mary Roberts Rinehart lived, and wrote The Circular Staircase, at 954 Beech Avenue in the Allegheny West neighborhood of Pittsburgh, Pennsylvania

She was born in Allegheny City, Pennsylvania, now a part of Pittsburgh. Her father was a frustrated inventor, and throughout her childhood, the family often had financial problems. Left-handed at a time when that was considered inappropriate, she was trained to use her right hand instead.

She attended public schools and graduated at age 16, then enrolled at the Pittsburgh Training School for Nurses at Homeopathic Hospital, where she graduated in 1896. She described the experience as "all the tragedy of the world under one roof." After graduation, she married Stanley Marshall Rinehart (1867–1932), a physician she had met there. They had three sons and one daughter: Stanley Jr., Frederick, Alan, and Elizabeth Glory.

During the stock market crash of 1903 the couple lost their savings, and this spurred Rinehart's efforts at writing as a way to earn income. She was 27 that year, and produced 45 short stories. In 1907, she wrote The Circular Staircase, the novel that propelled her to national fame. According to her obituary in the Pittsburgh Post-Gazette, that book sold a million and a quarter copies. Her regular contributions to the Saturday Evening Post were immensely popular and helped the magazine mold American middle-class taste and manners. Rinehart’s commercial success sometimes conflicted with her domestic roles of wife and mother, yet she often pursued adventure, including a job as the first woman war correspondent at the Belgian front during World War I. 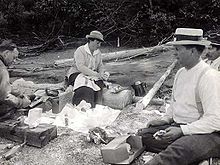 In the early 1920s, the family moved to Washington, DC when Dr. Rinehart was appointed to a post in the Veterans Administration. He died in 1932, but she continued to live there until 1935, when she moved to New York City. There she helped her sons found the publishing house Farrar & Rinehart, serving as its director.

She also maintained a vacation home in Bar Harbor, Maine, where she was involved in a real-life drama in 1947. Her Filipino chef, who had worked for her for 25 years, fired a gun at her and then attempted to slash her with knives, until other servants rescued her. The chef committed suicide in his cell the next day.

Rinehart suffered from breast cancer, which led to a radical mastectomy. She eventually went public with her story, at a time when such matters were not openly discussed. The interview "I Had Cancer" was published in a 1947 issue of the Ladies' Home Journal and in it Rinehart encouraged women to have breast examinations.

"The Rinehart career was crowned with a Mystery Writers of America Special Award a year after she published her last novel ... and by the award, as early as 1923, of an honorary Doctorate in Literature from George Washington University."[1]

Rinehart wrote hundreds of short stories, poems, travelogues and articles. Many of her books and plays were adapted for movies, such as The Bat (1926), The Bat Whispers (1930), and The Bat (1959 remake). In 1933 RCA Victor released The Bat as one of the earliest talking book recordings.

While many of her books were best sellers, critics were most appreciative of her murder mysteries. Rinehart, in The Circular Staircase (1908), is credited with inventing the "Had-I-But-Known" school of mystery writing. In The Circular Staircase "a middle-aged spinster is persuaded by her niece and nephew to rent a country house for the summer. The house they chose belonged to a bank defaulter who had hidden stolen securities in the walls. The gentle, peace-loving trio is plunged into a series of crimes solved with the help of the aunt."[3] The Had-I-But-Known mystery novel is one where the principal character (frequently female) does things in connection with a crime that have the effect of prolonging the action of the novel. Ogden Nash parodied the school in his poem Don't Guess Let Me Tell You: "Sometimes the Had I But Known then what I know now I could have saved at least three lives by revealing to the Inspector the conversation I heard through that fortuitous hole in the floor."

The phrase "The butler did it", which has become a cliché, came from Rinehart's novel The Door, in which the butler actually did do it, although that exact phrase does not appear in the work.[4] Tim Kelly adapted Rinehart's play into a musical "The Butler Did It, Singing." This play includes five lead female roles and five lead male roles.