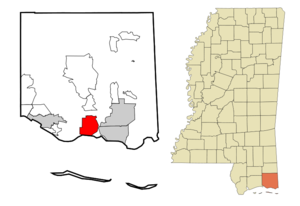 Gautier is a city along the , west of Pascagoula, in Jackson County, , . It is part of the Metropolitan Statistical Area. The population was 11,681 at the 2000 census. Locally, the name is pronounced as "GO-shay." Descendants of the Gautier family, for whom it was named, still live in the area.

There were 4,260 households out of which 38.1% had children under the age of 18 living with them, 54.9% were married couples living together, 17.1% had a female householder with no husband present, and 24.1% were non-families. 19.3% of all households were made up of individuals and 4.5% had someone living alone who was 65 years of age or older. The average household size was 2.73 and the average family size was 3.11.

The roots and pride of the citizens of Gautier are as deep as the stately live oaks that line more than 70 miles (110 km) of waterfront in this unique city on the . From Gulf of Mexico breezes to the twists and turns of the inland bayous, the natural beauty and quality of life in Gautier beckon modern day "settlers" to enjoy the serenity and amenities Gautier has to offer.

The City of Gautier is served by the . The main secondary school in Gautier is .

On , Gautier was one of the many cities affected by . Many of the coastal homes were either destroyed or flooded. Some of the houses along the coast were built on hills, leaving them with wind damage only. Homes built on the water were completely destroyed, occasionally leaving an intact slab. In a few cases the slabs were cracked in half. One home in particular was built on pylons 13 feet (4 m) above sea level and had the floor ripped out from underneath. Most of northern Gautier, above the railroad tracks, had some wind damage but largely remains intact. Gautier did not receive any damage from in 1969, so the damage from Hurricane Katrina demonstrates how much larger this storm was. Despite the damages caused by Hurricane Katrina, the historic home of Fernando Upton Gautier remains intact and open for business.