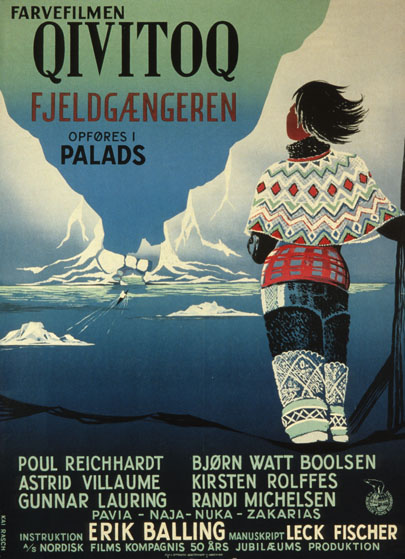 "Qivitoq" is a 1956 Danish film directed by and starring and . An intense romantic drama, the movie was filmed entirely on location in Greenland. It was nominated both for the and for the at the .

A young teacher, Eva Nygaard (), arrives in Greenland from Denmark to surprise her fiance, the Doctor Erik Halsøe, but is crushed to find he has not waited for her and he is about to be married to his assisting nurse. Eva travels to a small fishing village to await the next ship back to Denmark. There she enters into a tense and often confrontational relationship with Jens (), a quiet moody Dane who manages a trading company outpost. Meanwhile, Jens is trying to persuade a Greenlander named Pavia (Niels Platou) to become a company fisherman, despite Pavia's fear of alienating his fellow villagers and upsetting the spirit, Qivitoq. After Eva helps Jens treat a boy who has been attacked by dogs, Jens opens to her and realizes he loves her. Before he can tell her, he learns that Pavia in his new boat is in danger. Jens and Pavia's girlfriend, Naja (Dorthe Reimer), travel overland to rescue him, but Jens falls into an icy crevice and is rescued by Pavia instead. In this way, Pavia returns to a heroe's welcome in the village. Jens hastens back only to discover he is too late, that the boat that Eva had been awaiting has already sailed. Dejected, Jens goes home and discovers Eva is there waiting for him.

* as Jens Lauritzen
* as Eva Nygaard
* as Marius Mariboe
* as Fru Mariboe
* as Dr. Erik Halsøe
* as Sygeplejerske Kirsten Prage
* as Pavia
* as Naja
* as Nuka
* as Cæcilie
* as Zakarias