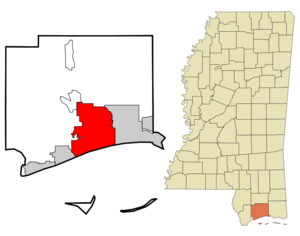 mapsize = 250x200px
map_caption = Location of Gulfport in the State of Mississippi

Gulfport is the second largest city in after the state capital Jackson. It is the larger (population wise) of two principal cities of the , which is included in the . As of the 2000 census, the city of Gulfport had a total population of 71,127. Gulfport is co- with Biloxi of . Gulfport is the east coast home to the , and also the birthplace of American football player .

There were 26,943 households out of which 32.1% have children under the age of 18 living with them, 42.6% were married couples living together, 18.2% had a female householder with no husband present, and 34.5% were non-families. 27.7% of all households were made up of individuals and 8.5% had someone living alone who was 65 years of age or older. The average household size was 2.51 and the average family size was 3.07.

Gulfport is the location of , which also serves the neighboring town of Biloxi. The airport suffered extensive damage due to Hurricane Katrina. A major renovation project is for the most part completed and it has resumed commercial air service. New airlines are being regularly added.

The City of Gulfport is served by the and the .

Gulfport's local newspaper is . It is also served by two television stations, the ABC affiliate , and the FOX affiliate . There are also seven radio stations in the Gulfport area.

On , , Gulfport was hit by the strong eastern side of . Much of Gulfport was flooded or destroyed in one day by the strong hurricane-force winds which lasted over 16 hours and a storm surge exceeding 28 feet (9 m) in some sections.

"" newspaper in Biloxi-Gulfport, under the executive editor , won the 2006 in journalism for its Katrina coverage.